Laura Linney '86 says that despite winning three Emmy awards and an Oscar nomination she's not famous—and that's a good thing. "I'm well-known, but I'm not famous," she said from the stage of the Salomon Center in October. "I've been very, very fortunate for a long time that I can go about my work and be able to concentrate on my work and not be distracted." 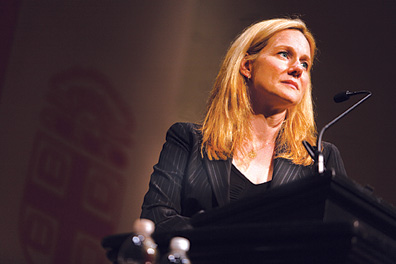 Linney has walked that fine line between fame and familiarity ever since she left Brown. She's been well-known enough to make a good living as an actor, which in turn has freed her to choose her projects carefully. She has moved seamlessly between huge hits like The Nanny Diaries and the TV show Frasier and smaller independent productions such as The Savages and The Squid and the Whale. Last year, she won an Emmy for her performance as Abigail Adams in the HBO miniseries John Adams, proving further that she is a fiercely independent actor for whom the role comes first.

During her talk at Brown, which marked the fifth year of the Don Wilmeth Endowed Lectureship in American Theater, Linney ranged over a number of career highlights. They began on campus, where during the summer she might star in four different shows over the course of just a few months.

"When I say Brown really feels like home, I mean it," she said. "I didn't go home. I stayed here" year-round. There was also the moment, she said, "when the penny dropped" while she was standing on the College Green. "I don't know what it was, but something happened," she said. "I learned an act and a half in about twenty minutes, and I'll never forget that. My mind all of a sudden had a skill that it had not had before."

Another pivotal moment came when she traveled to Russia to attend an acting school after graduation. Exhausted and struggling in her acting, she decided to give up and find another line of work. A teacher then came up to her and said, "This is where you are supposed to fail. Fail here, fail big." "I didn't feel any less in agony," Linney said. "But it made me stay. The shame was gone." 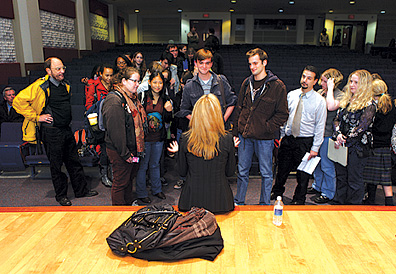 During the question-and-answer session following Linney's talk, a student asked her about her experience filming the 2003 movie Love Actually in Great Britain. "I just love those Brits," she said. "I love working with those Brits, I love being in that Brit land." Linney, who has been in thirty films over the last fifteen years, nevertheless remembered being star-struck during breaks in production. "It was like a village, an actor's village," she said. "Liam Neeson was next door, Alan Rickman was next door, and Emma Thompson was over there. It was just fantastic."

Love Actually was in production at the same time as Clint Eastwood's Mystic River, in which she also starred. Linney described the constant flights between Boston and England, which she noted as one of the downsides of her career. "I always thought of myself as a very conventional person, and I'm not," said Linney, who grew up in Connecticut. "I travel all the time. I don't have children. My life is bigger and more flavorful and more complicated than I ever thought it would be. But when you have expectations and your life goes in a different direction, it can be difficult to reconcile." She said she often misses spending holidays with relatives and regretted having to sometimes miss the funeral of a friend.

"Life is never what you think it's going to be—ever," she concluded. "That's the joy and excitement of it, but it can be a little frightening."

Reader Responses to Her Big Life