"She was on fire," is how Vice Chancellor Jerome C. Vascellaro '74 put it. He was referring to the tenor of President Ruth Simmons's annual address to alumni on the Saturday of Commencement weekend. On Friday the University had announced that the Campaign for Academic Enrichment—aka the Boldly Brown campaign—had met its $1.4 billion goal nineteen months before its December 2010 deadline. Also on Friday, Simmons had helped break ground for the $40 million Perry and Marty Granoff Creative Arts Center along the Pembroke Walk. 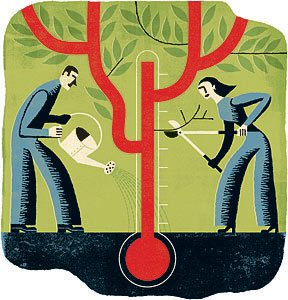 The news was not all good, however. The current economic crisis has reduced Brown's endowment by 25 percent, and the administration still needs to cut tens of millions of dollars from its budget. Still, the economic downturn has made Brown's fund-raising achievement all the more remarkable. No wonder Simmons seemed to be fighting back tears as she addressed alumni beneath a tent on Lincoln Field. "This is not a time for champagne receptions," she said. "Except for today."

Last December, says the campaign's chief architect, Senior Vice President for Development Ron Vanden Dorpel '71 AM, "we really kind of fell off a cliff." But this spring brought a burst of donations, and at its May 22 meeting the Corporation accepted $63 million in gifts and pledges, including $30 million for financial aid from the Steven A. and Alexandra M. Cohen Foundation. By June 30, the $1.4 mark had been met.

Four years ago, the goal seemed a stretch, says Matthew J. Mallow '64, who cochairs the campaign with Vascellaro and Elizabeth Z. Chace '59. "We spoke with fund-raising consultants at the start," Mallow says. "By conventional measures we had the capacity to raise $1 billion; $1.4 billion was a bit of a leap of faith. But some of us were confident that we could do it."

Vascellaro attributes the campaign's success to the strong vision behind Simmons's Plan for Academic Enrichment. "We have not raised money for the sake of raising money," he says. "We raised it for the plan: for financial aid, the faculty, a new home for the medical school, new facilities. It's been thematic. When you go out and ask people for time or money, you have to make sure that you are making good use of that time and money. What you've seen this year is the momentum of the plan."

Mallow says people have given for a range of emotional reasons as well. "For a broad swath of donors it's about giving back. Some are nostalgic for the formative role Brown played in their lives," he says. "For Brown parents, it's thanks for what Brown is doing for their kids." And then there's the appeal of Simmons herself. "Ruth strikes a chord wherever she goes," he says. "Her own personal story is absolutely compelling."

Vascellaro has called this "a campaign of discovery," and it has been marked by surprises. First came the $100 million gift from liquor magnate Sidney Frank '42, who couldn't afford to finish his own studies at Brown. (The first forty-nine Sidney Frank Scholars—all exceptional students from low-income families—were among this year's graduates.) The campaign's second $100 million gift came from Warren Alpert, a Rhode Islander who had no connection to Brown but wanted to support the medical school.

Another piece of unlikely fortune followed the Smith Swim Center's roof failure. "Then out of the blue comes this bequest [$14.5 million from Raymond L. Moran '41] for an aquatics center," Simmons told the Saturday morning crowd. Still another has been the generosity of non-alumni parents, who contributed $168 million to the campaign. "It's unique to have non-alumni parents giving at this level," says Vanden Dorpel, citing the contributions of the Granoffs and Cohens, as well as former trustee Charles Rosenthal.

Perhaps the most striking aspect of this campaign has been its success despite the worst economy since the Great Depression. Last winter fund-raisers blanched, fearing cash-strapped donors would fail to deliver on their pledges or stretch out payment schedules. But 99 percent of donors have continued to pay on time, Vanden Dorpel says. "In fact," Mallow adds, "we've had more [people] asking if they should accelerate to make up for lost endowment income."

Having met its goal early, the University is now looking to surpass it. "We aren't resting on our laurels," Simmons told the alumni. Fund-raisers believe they can raise another $275–$300 million by the campaign's scheduled end in December 2010. Another $50–$75 million would fund endowed professorships, and $114 million would bring the financial-aid endowment up to the $400 million necessary to keep Brown need-blind.

The Corporation is also committed to five construction projects that will require $65 million to complete. Having abandoned plans to erect new buildings for the medical school and mind, brain, and behavior research, Brown will now remodel a building it owns in Providence's Jewelry District for medical education and will rehab the Metcalf complex of buildings on Thayer Street for mind, brain, and behavior. The Stephen Robert '62 Student Center in Faunce House, the Nelson Fitness Center, and the new aquatics center all need additional funding.

The campaign has also boosted the Brown Annual Fund, which has raised nearly $201 million; its original goal was $185 million. "We have totally changed Brown's fund-raising expectations," Vascellaro says, "Before this campaign, Brown raised about $60 million a year. Over the past five years, we've brought in $250 million annually; that's our run rate. We've got to continue that for-ever." He pauses for a moment.

"Well, maybe go back to $200 million a year. The process of renewal is ongoing. This is not a clock that you wind up and it runs forever."

Faced with a drop in fund-raising and endowment income, Brown tightens its belt while upping financial aid. ("Planning for the Long Haul," March/April 2009 ).

Reader Responses to $1.4B & Counting