"This is the coolest Baccalaureate ceremony I've ever seen," declared Fareed Zakaria, the CNN host and editor of Newsweek International, from the pulpit of the First Baptist Church in America. Undoubtedly, the founders would have been dumbfounded by the service's multilingual program of music, prayers, dances, and poems representing a dozen faiths and cultures; but its energy and breadth clearly delighted the speaker, who was born in Mumbai, India, and is known for the scope and depth of his international understanding. 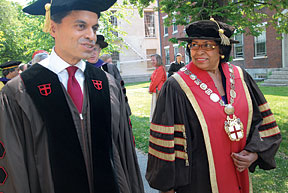 Mary Beth Meehan
Zakaria and Simmons march to the Baccalaureate cermony.
Although the U.S. military is fighting in two countries and the global economy is in a deep recession, Zakaria took a long, even optimistic, view of the world the graduates were entering. "You are at the hinge of history," he said, emphasizing how rare it is that the globe is not dominated by a serious conflict between superpowers. "You may think of this as an abstract idea, but peace is after all the bedrock of civilization.... Peace is a little bit like oxygen. When you have it you don't think a lot about it. But when you don't have it it's all you think about."

Yes, terrorism is a threat, he said, but it does not exact the toll war does. Furthermore, terrorism "depends on you. If you are not terrorized, it doesn't work," he said. "Get out from under the beds. Resilience is the path to defeating this great scourge of our time."

This is not the world's first financial crash, Zakaria continued. He urged students to look past the current crisis to the past decade's economic growth. Over the last eight years, he said, 100 countries have grown at a rate of 4 percent a year or more. The diffusion of knowledge around the globe has created political and economic stability that has lifted millions of people out of abject poverty—400 million in the last year alone.

When people make dire predictions, they tend to forget about the human response, Zakaria said. "That's where I have my hope."