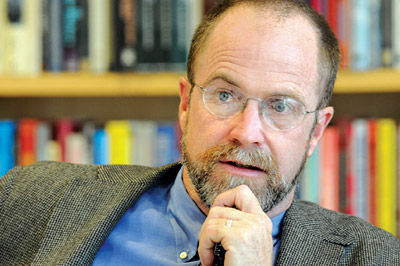 Frank Mullin
Kennedy has a vision for the Watson Institute.
Michael Kennedy It seemed to combine the best of all possible worlds. On the one hand, Watson has historically engaged with the most pressing issues facing the world, so I have a great tradition and legacy on which to draw. On the other hand, it is more agile than any organization I've been involved with. It is not defined it terms of regions or existing areas of research. It is defined simply in these terms: how is it that we can best address the most pressing global issues?

BAM What are your goals and objectives for the institute?

Kennedy When the Watson Institute was founded, it was founded around a clear and pressing global question—how is it that we are going to reduce the risks of global nuclear confrontation between the Soviets and the Americans? Today, the world has changed. First and foremost, there is no clear pressing central issue. The first and most important challenge for us is to think about the relationships among all the world's different problems. Right now we have experts who work on any one of them. What we can begin to do is to think about the relationships among them.

BAM The Watson Institute has long been renowned for its focus on global inequality. Will that continue?

Kennedy Yes. But the other side of this is we have to think about the dispersal of power across the world—the ways in which different relationships organize around the flow of small arms, the flow of people, the flow of capital, and the flow of ideas. What we want to understand is the relationship among different global "flows"—of disease, of environmental risk, of investment, of weapons, and so on.

BAM As a sociologist, your own research has been on Eastern Europe after the Soviet Union. Why?

Kennedy After the Berlin Wall fell, I began to think it was good to study social movements because they challenge systems. I wound up studying what everyone calls "transition"—the movement from planned to market economy and from dictatorship to democracy.

BAM We hear you love golf.

Kennedy One of the joys I've discovered in my international work is that some places really love to take you golfing. I especially loved one round of golf I played in South Korea. I never had a better caddy in my life. Every time I followed his advice on how to putt I made it! It's only when my chutzpah got the better of me that I missed the putt.