In November 2008, Justin Vitarello approached his boss at a Washington, D.C., e-commerce company and told him he wanted some time off. "I need to go make this dream of mine a reality," Vitarello said. It wasn't too hard persuading his boss, who was his brother, Adam. 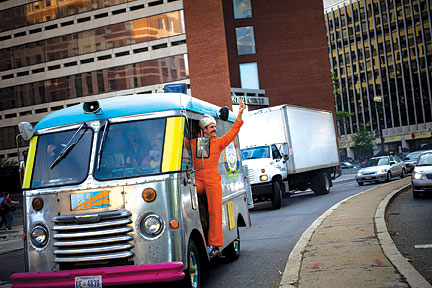 Adam Vitarello, a.k.a. Gewpee waves to people in Dupont Circle before the truck comes to a service stop.
Dominic Bracco II/ The Washington Post

The first step toward the dream was buying a truck. Vitarello found a beat-up step van for $2,000 in New Jersey. It had been manufactured during the 1960s and through the years had been used by various owners to ferry around everything from tools to pickles. With his mother's help, Vitarello then gutted the inside and installed a refrigerator, a freezer, an air conditioning unit, and hot plates. He also scraped off all the paint, painted the wheels to look like those on a traveling circus wagon, and emblazoned "The Fojol Brothers of Merlindia, A Traveling Culinary Carnival" on the side. Voil√†! The dream was realized. Vitarello became a street-food vendor.

This, however, is no ordinary street-vendor operation. A loudspeaker blares out opera and John Philip Souza marches whenever the van is motion. When it's parked for the lunch hour, New Zealand folk or Radiohead are the music of choice. When Justin and his two partners arrive at their lunch location, they send a tweet to their 3,400 Twitter fans to let them know where they've set up. Vitarello lays out blankets on which customers can sit, and he invites all kinds of street performers—jugglers, stilt walkers, acrobats, and hula hoopers—to come by and put on a show. Some of these performers are local office workers pursuing their own dreams before having to go back inside.

Vitarello says he drew some of his inspiration from a research trip to the Circus World Museum in Wisconsin he made a few years back. "Fojol Brothers" is an allusion to the Ringling Brothers, and "Merlindia" is intended to conjure up images of Merlin and, by extension, the magic of the circus. Oh, and when they're on duty the brothers also wear costumes— fake moustaches, bright gloves, and multicolored turbans. 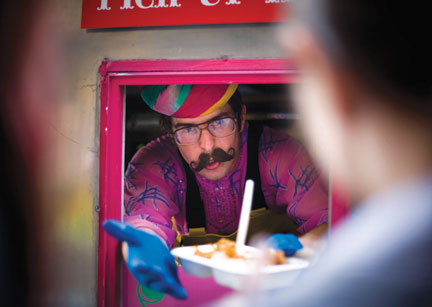 Justin Vitarello, a.ka. Dingo, hands lunch through the serving window of the Fojol Brothers Truck. The menu is Indian-inspired.

Vitarello, a double concentrator in business economics and public policy, says he became fascinated by "what a circus means to a country in a recession and at war." He then decided his food truck would be a traveling carnival, offering customers a distraction from their day-to-day woes. "Our concept involves smells and colors and music and taste," Vitarello says.

Finally, they have given themselves handles. Justin goes by the name Dingo, which he likes because it resembles the first name of Ringo Starr. Adam, a former international relations and history concentrator, is known as Gewpee. No one quite knows why.

"It's a pretty surreal experience being in the truck," Adam says. "It's unreal the number of people who were staring in awe at us from their office windows. People would smile and wave even before they knew what they saw."

Since the end of September, Vitarello has been going out five days a week to serve lunch. He gives a portion of his profits to charity and soon plans to bring along some of the at-risk youth he mentors to give them a feel of what it's like to run a business. He now has about 100 to 200 customers and soon plans an expansion. Says Vitarello, "Maybe more trucks, maybe new cuisines, maybe who knows?"