Living off the Sea

On their first date, Valy Steverlynck '93 and Eric Horne '92 picnicked at the edge of a quarry and dove in for a risky swim. Over the past decade they risked the elements and financial ruin to build Flying Point oyster farm, on Maine's Maquoit Bay. They sell oysters to restaurants and other vendors, mostly in Boston and Washington, D.C. 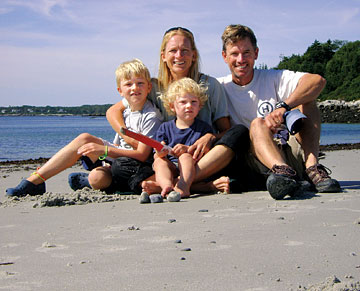 The path between their first date and their successful business has been a circuitous one. A sculptor who grew up on the Argentine pampas, Steverlynk concentrated in visual arts at Brown and earned her MFA at the University of Wisconsin-Madison; living in Boston in the mid-1990s, she made sculptures from textiles and found materials. Horne, meanwhile, was raised by the water, in Freeport, Maine, and followed his Brown degree with a master's at Harvard's Graduate School of Education. All the while, the couple missed fresh air, and sneaking a swim at their health club paled in comparison to the weekend hours they spent on Maquoit Bay helping Horne's father grow his highly successful Winter Point oysters.

So in 1999 they joined the family business, trading in their city clothes for Grunden's fishing gear—those bright orange rubbery suits you see on commercial fishermen. In 2001 the couple leased eight oyster sites along the coast, but over the next four years almost all of them failed. Locations that looked good on paper delivered dead oysters. In the winter of 2006, record rains destroyed their crop. After settling on two new sites at the bottom of Maine's Cousins and Sheepscot rivers, they finally turned a profit in 2009, raking 150,000 perfect oysters from the ocean floor. They now ship continuously throughout the season.

On a warm October day last fall, Steverlynck and Horne tended their oyster nursery from their Carolina Skiff, idling down a row of mesh bags held afloat by recycled Gatorade bottles. Each of the 1,800 bags contained 800 seeds. Four months earlier, the couple had placed those seeds in upwellers, floating docks equipped with electric motors to circulate water around them. After each had grown to thumbnail size, the oysters then were moved to the nursery, where the couple tended them from June until early November, when they were piled onto a barge and dumped into one of two tried-and-tested stretches of deep water. There the oysters will remain for roughly three years, if they survive the green crabs, rock crabs, sand crabs, oyster drills, and starfish. Coastal flooding can also bury a crop in silt.

When the oysters reach the three-inch size that restaurant chefs prefer, they're harvested. Depending on where they grow, Flying Point oysters can be "either on the saltier side or have a deep, briny flavor with a trace of sweetness," Horne says.

During the winter months, Steverlynck retreats to her studio and Horne uses the free time to investigate some new interest (last winter it was private septic systems, with a particular focus on the effect of U.V. rays to treat sewage). They're politically active on behalf of clammers, and have succeeded in helping get seven laws passed over the last three state legislative sessions. "A lot can get done if you have 100 angry clammers on your team," Horne jokes.

Sally Noble is a freelance writer in Portland, Maine.

Reader Responses to Living off the Sea