With their austere acoustic-guitar backing and country-church harmonies, the Wingdale Community Singers sound at first like folk revivalists, dipping into the well of century-old mountain ballads and spirituals. But don't be fooled. Their new CD, Spirit Duplicator (Scarlet Shame), will send you not to Appalachian hollows, but to the gritty streets of San Francisco, where a marquee hawks "Naked Goth Girls." The singers harmonize about "going AWOL from the army of the Lord," dissing organized religion with a song that sounds like—what else?—a hymn. 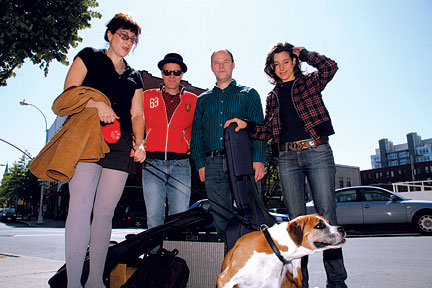 The Wingdales: Hannah Marcus, David Grubbs, Rick Moody, and Nina Katchadourian.
Courtesy Wingdale Community Singers
If the Wingdales' songs are unconventional, so are the backgrounds of the group's members: novelist Rick Moody (The Ice Storm, The Diviners), visual artist Nina Katchadourian, and the New York City songwriters and experimental composers Hannah Marcus and David Grubbs. Moody, who wrote his first song at age twelve, had a rock band at Brown. But he dropped music as his writing career took off and didn't resume performing until the late 1990s, when he met Marcus and other musicians. "That process kind of smoked me out and made me feel less anxious about it," he says.

Katchadourian, too, was in a band at Brown. She says she has been playing music longer than she's been making art, but only recently did she add "performing musician" to her professional persona. "It's so nice to have company," she says of performing in the Wingdales, "whereas art-making is a pretty solitary activity. [With music] you may have written the song alone, but the minute you bring it to the group, it begins to evolve."

Moody and Marcus started the Wingdales (named after a now-defunct New York State psychiatric hospital) to play the kind of rough-cut roots music captured on Harry Smith's seminal six-album Anthology of American Folk Music, released in 1952. As the Community Singers tag suggests, the band is very much about the group-singing experience. Both Moody and Katchadourian have been heavily influenced by the Southern sacred-music tradition of shape-note singing, thanks to shape-note gatherings held in such unlikely venues as the downtown club the Living Room on Sunday mornings.

At the same time, Moody and Katchadourian are emphatic that the group does not—and cannot—recreate the sounds of another era. "We all have a shared allergy to faux old-timeyness," says Katchadourian. "We live in Brooklyn. We're not sitting on rocking chairs on a porch in Appalachia. The songs are about urban things, observed around us. It's very contemporary subject matter, even if the form is older." 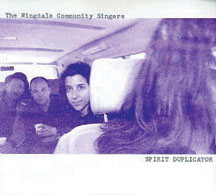 Nor do the songs fit into the first-person mold of contemporary singer-songwriter music, Moody says. "I try not to get into a sort of Carly Simon/James Taylor land of light, affirmational, confessional lyrics," he says. "I'm writing narrative mostly in the third person. The lyrics that I wrote on the record are little stories."

In fact, he adds, "Music-making and prose-writing are very analogous, allied activities. Prose, after all, has a musical dimension because it's made out of sound." Moody believes playing music makes him better writer: "It makes me listen better and think more clearly about how prose sounds."

While the Wingdales play periodic gigs and promote Spirit Duplicator, their second CD, all the group's members continue to lead multitasking creative lives. "At any given time," Moody says, "Nina is making a show in L.A., and Dave is either teaching in Brooklyn or playing in East Germany, Hannah is making her solo album, and I'm about to go on tour for a novel. So it's hard to get all four people in one spot sometimes, but it's exciting when we do. "

Best of all, he says, the unique combination of voices and backgrounds keeps sparking new music. "It's great to know that as soon as we're done with our responsibilities for Spirit Duplicator, we can start talking about what we're going to do with all these new songs."

Jeffrey Pepper Rodgers (jeffreypepperrodgers.com) is the author of Rock Troubadours and other books on music. He was a grand prize winner in the 2008 John Lennon Songwriting Contest.