On June 26, 2007, the episcopal bishop of rhode island, Geralyn Wolf, summoned Ann Holmes Redding, an Episcopal priest, to her office. There was a problem. Redding had become a practicing Muslim, and Wolf wanted to know how she could continue as a priest in the Episcopal Church. Redding believed that nothing in either faith made the other invalid. "I'd been able to get a deep appreciation of the convergences between the two religions," she says. But the bishop didn't see it that way. She gave Redding a year to choose between them. 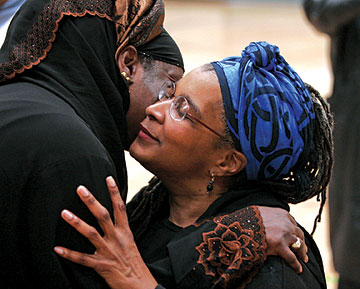 The Rev. Ann Holmes Redding, right, gets a hug at the end of service at the Al-Islam Center in Seattle.
John Lok/The Seattle Times

Still refusing to give up her Islamic identity, Redding was defrocked last April. Though she lives in Seattle, she'd been ordained in Rhode Island in 1984, so under the rules of the Episcopal Church, Rhode Island's bishop still had authority over her.

It's not that Redding takes her Episcopal faith lightly. She was raised in the faith, but left to join a Unitarian congregation after her church in Pennsylvania chose to disband its choir rather than accept African Americans. It was at Brown that she rediscovered her love for the Episcopal liturgy. She joined St. Stephen's Church, and says she was very happy there. "I was returning to the religion of my childhood," she says, describing her years at St. Stephen's as a "conversion experience."

"It was one of these intense deepenings of experience," she says. "It's hard to explain: a sense of turning my life to God, an experience of surrender." After graduating, she attended the General Theological Seminary in New York, earning a master's in divinity, and then went to the Union Theological Seminary to get a doctorate in New Testament studies. In 2001 she began working as the director of faith formation and renewal at St. Mark's Cathedral in Seattle, and, she says, "didn't feel any gaps in my Christian faith."

Then 9/11 happened. In an effort to build interfaith understanding, her church invited Islamic speakers to teach classes about their religion. "It cleaned out the stereotypes I had learned about Islam," Redding says.

Redding found herself taking great comfort in the teachings of Islam. Her mother had recently died, and she says that Islam's portrayal of the individual's relationship to God helped her through this period. Islam, she points, means "total surrender of oneself to God" in Arabic: "I needed to surrender to God again."

Surrendering to God, she believed, is the best way to cope with the hopelessness she felt during this time. She studied Islam for five more years, and in March 2006 Redding made a declaration of faith in it. Part of the declaration stated: "There is no god but Allah, and Muhammad is his messenger." To Redding that meant she was combining two great religious traditions, but to her bishop it seemed Redding was committing a form of apostasy.

Though Redding is no longer a priest in the Episcopal Church, she still attends Episcopal services every Sunday. But she also prays five times a day in accordance with Islamic practice. Her newest project is organizing Abrahamic Reunion West, a nonprofit group aimed at bridging the divide between Islam, Christianity, and Judiasm, She hopes the organization will help educate businesses, churches, and other groups interested in learning more about the similarities among the Abrahamic religions.

Reader Responses to Surrendering to God