OK Go, the power-pop foursome led by Damian Kulash, has always had style. In its breakout dance video "Here It Goes Again," the band danced on treadmills wearing retro vests; Kulash stood out in papaya-colored pants. For its 2007 tour, the foursome wore jackets stitched with thousands of LED lights that turned the group into a walking art installation. OK Go's upcoming tour includes performances at fashion week in Paris and Rome. Now, though, with the January release of their third album, Of the Blue Colour of the Sky, these sharply dressed pretty boys reveal the substance behind the style. 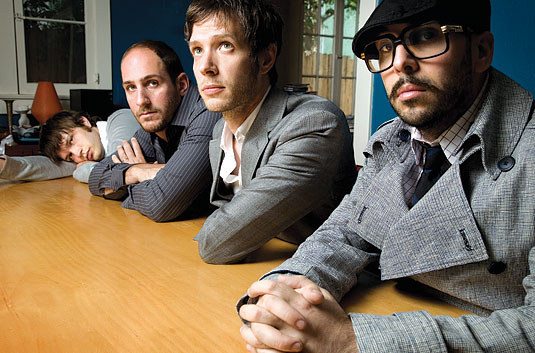 OK Go: Andy Ross, Dan  Konopka, Damian Kulash, and Tim Nordwind.
Jeremy & Claire Weiss Photography
The album is a bit of a departure for Kulash and band mates Tim Nordwind (bass), Dan Konopka (drums), and Andy Ross (guitar, keyboards). It's less about hooks and more about groove-based musical exploration. "It feels like the music that's been just out of reach in the back of my head all these years," Kulash said in a phone interview. "I'm more proud of this than anything else we've done."

After touring with their last album for thirty-one months straight, Kulash said the thrill of standing in front of an amp and striking a power chord had diminished: "We just weren't excited by the same patterns anymore." So the band returned to its "root-level" influences—in particular, Prince's classic Purple Rain.

Of the Blue Colour of the Sky also marks new lyrical territory for the band. Kulash, who studied semiotics and composed an album of Elvis covers for his thesis at Brown, says he strives to write lyrics that are "straightforward without being clich√©." In the past this approach sometimes resulted in pop tunes whose titles said it all: "You're So Damn Hot," "It's Tough to Have a Crush," "Get Over It." But Kulash's new compositions boast greater complexity and nuance. In "Needing Getting," an upbeat tune with a sad undercurrent, he sings, "And I, yeah I still need you, but what good's that gonna do? Needing is one thing, and getting, getting's another." Thematically, it calls to mind the Rolling Stones' "You Can't Always Get What You Want," but with Kulash's honest vocals and deftly layered musical elements, OK Go makes this sentiment its own. 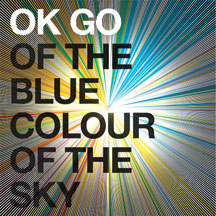 okgo_cover.jpg
The band achieves this greater lyrical and musical depth without losing its playful spirit. In the video for the new album's single "WTF?" (see it on YouTube), Kulash and company create a psychedelic wonderland of patterns and colors with nothing more than a green screen behind them and a slew of brightly colored dollar-store props.

"WTF?" shares the whimsical pop sensibility of OK Go's first two albums. It's a light, airy confection, the musical equivalent of cotton candy. Taken as a whole, though, Of the Blue Colour of the Sky is more like a candy apple. It's sweet, but you can sink your teeth into it.

Michelle Walson is the producer of RISK! (www.risk-show.com), a live storytelling show at New York City's 92YTribeca and a free podcast on iTunes.

UPDATE: NEW OK GO VIDEO - "THIS TOO WILL PASS"

Reader Responses to Sweet But Crispy