Who Speaks for Alvin?

Glenn Berger studied economics at Brown, but he's found success writing scripts for Kung Fu Panda, Monsters vs. Aliens, and Alvin and the Chipmunks: The Squeakquel. "Among economics concentrators I was known for my sense of humor," he says. "Among comedy writers, I am known for my grasp of economic theory." 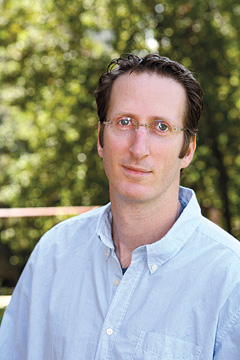 GB My junior year I began performing stand-up comedy at a club in downtown Providence. It was terrifying. The transition to writing came after an audience member approached me and said, "That would've been much funnier if you weren't saying it."

BAM Did you know you'd go into comedy after college?

GB I moved to Boston to work as a management consultant; that's where I met my writing partner, Jon Aibel (Harvard '91, but don't hold that against him.) The consulting job lasted only nine months before I decided to quit and move to Los Angeles. Our first job was writing game-show questions at MTV. Just imagine how proud my parents were when they heard that.

BAM You eventually joined Fox's King of the Hill. What did you learn there?

GB Instead of just trying to write a bunch of funny jokes, we were taught by [series cocreators] Greg Daniels and Mike Judge to focus on character-based comedy and telling a story in three acts.

BAM Your first movie, Kung Fu Panda, was a hit right out of the box.

GB "A hit right out of the box" ignores all the years we spent writing and rewriting movies that either never got made or got made without our names on them.

BAM Did you picture Jack Black as the lead character from the get-go?

GB By the time we came onto Kung Fu Panda, Jack Black had already been cast, which was really a gift from the gods. Jack is incredibly ego-free, willing to try anything, very collaborative—and he really makes me laugh. The biggest surprise, though, is how serious he can be.

GB In the days before he was a big movie star, Jack Black was just a chubby kid with divorced parents, who thought he wasn't good enough to make it in Hollywood. He really identified with the emotional story of a fat panda who is told he can't do kung fu.

BAM What kinds of movies do you like best?

GB Films like Broadcast News or Tootsie, which are funny as hell when they want to be but aren't afraid to go for dramatic moments. I'm not kidding myself that Kung Fu Panda is anything approaching the works of James Brooks or Larry Gelbart, but it's gratifying to hear from people who thought it was funny and moving.

BAM Both kids and grown-ups enjoy your movies. How do you strike that balance?

BAM Did anything at Brown prepare you for Hollywood?

GB The biggest thing would be learning how to be self-directed. At Brown, you can skate through with no course requirements, or you can challenge yourself. Being a writer is very similar. If I want to work, I've got to come up with an idea for a movie. Nobody tells me when to show up at my desk or how many pages to write. If I tire of writing for talking animals (nothing personal, Alvin, Simon, and Theodore) then it's incumbent upon me to break into another genre of film.

BAM Any economic advice for us?

GB Let's be honest, I don't remember enough about economic theory to even construct a joke about it!

Reader Responses to Who Speaks for Alvin?