Lots of students take time off, but few accomplish as much as Rajiv Kumar '05, '11 MD. When he returned to the Warren Alpert Medical School this semester, Kumar had parlayed his experience founding two nonprofits into a for-profit wellness company called Shape Up the Nation. Its goal? Well, to shape up the nation. 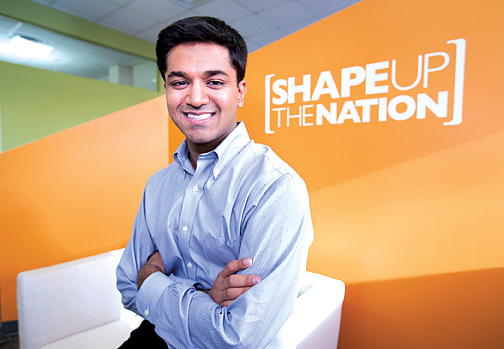 Scott Kingsley
After Shaping Up Rhode Island, Rajiv Kumar set his sights on the nation. Now he's returned to medical school.
The company is modeled on Shape Up Rhode Island, a nonprofit he began as a medical student. Kumar says during his first year in medical school he was frustrated by the number of preventable illnesses: type II diabetes, heart disease, osteoporosis, and certain cancers, to name a few. He'd concentrated in economics as an undergraduate, and says he was struck by "the human and economic toll that could be prevented" if people reduced their health risks.

"Most people were struggling with weight and exercise," he says. "Patients would try, fail, come back." As a child of the Internet, Kumar decided to create a social network that would offer the same motivation, support, and accountability as groups like Alcoholics Anonymous and Weight Watchers. He persuaded Citizens Bank and Blue Cross/Blue Shield of Rhode Island to pay for their employees to join, and in 2006 Shape Up RI kicked off its first wellness competition, enrolling 1,738 Rhode Islanders onto teams that vied to log the most hours of exercise and lose the most weight. Brown and other employers signed on, and last year more than 13,000 Rhode Islanders lost an average of 7.3 pounds over the program's twelve weeks, exercising an average of almost five hours a week.

With Brown research fellowships and entrepreneurship grants, Kumar and classmate Brad Weinberg '03, '11 MD expanded that model into Shape Up the Nation, which boasts 100 corporate clients, including Aetna, CVS, and the Cleveland Clinic. All are self-insured, so they have a financial stake in improving employees' health.

Kumar's company practices what it preaches. When it hired its first CEO—Harvard MBA and former Brown sailor and Olympic sailing coach Michael Zani '92—Weinstein gave him a road test. "He took me for a running interview," Zani says. "Literally. Brad is the twenty-five-year-old triathlete, and I'm the one doing all the talking!"

With Zani at the helm, Kumar and Weinberg have headed back to medical school. Which is fine with Kumar's parents, both doctors, who weren't thrilled that he was taking a leave in the first place. For his part, though, Kumar is uneasy about going back to being graded. "I've gotten used to calling the shots," he says.