"We now live in a time where public events smash up against our private lives every day," novelist Salman Rushdie told a packed De Ciccio Family Auditorium at Salomon Center in February. 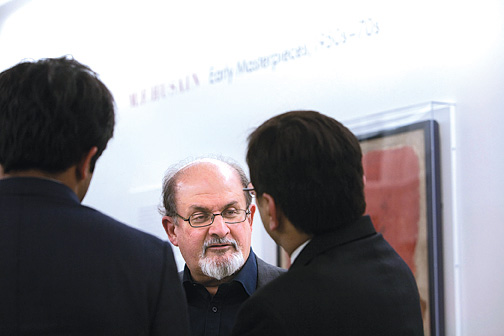 Scott Kingsley
After his talk, Rushdie attended an art reception, where fans lined up to speak with him and get his autograph.

Rushdie should know. In 1989 he was famously placed on the receiving end of a fatwa, or death sentence, issued by Iran's Supreme Leader Ayatollah Ruhollah Khomeini in response to Rushdie's The Satanic Verses, which Islamic fundamentalists perceived as blasphemous. Rushdie went into hiding under police protection while at the same time becoming an internationally recognized symbol of the clash between Islamic fundamentalism and the West. "My private life has been more affected than some writers," Rushdie said, with wry understatement.

But the Indian-born Rushdie, who spoke as part of Brown's yearlong focus on India, said he believed it was the writer's obligation to bring together the public and private spheres. "The literary world I grew up in was one in which the interaction of public material and literature seemed normal," he said about his childhood in India. The authors he most admired, such as the Pakistani poet Faiz Ahmed Faiz, could easily make the transition from writing about love to writing about the partition of Pakistan and India.

When Rushdie began writing fiction in the 1970s, he initially set out to write a semi-autobiographical novel about his childhood. He had been born eight weeks before India won its independence from Britain, but his protagonist was born at the exact moment of Indian independence, a change that gave the novel a new social and political dimension. The resulting masterpiece, Midnight's Children, interweaves the fate of the protagonist with India's history. "The moment the boy and the country become twins, you have to tell the story of both," Rushdie said. "As a result, history came galloping into the book and made it about five times as long as I thought it was going to be and about twenty-five times harder to write." Rushdie said one of his central themes since he wrote Midnight was "how history and the individual collide": "Are we the masters or victims of our times? Do we shape history or does it deform us?"

Rushdie said that Khomeini's fatwa, which is still in place, had led him to adopt a radical view of the right to free speech. "Bad ideas, dangerous ideas do not go away if you ban them," he said. "What they do is go underground and become in many ways more dangerous."

He cited International Guerrillas, a 1990 Pakistani film that depicted him as a villain whose gambling and nightclub empire brought the nation to ruin. The British Board of Film Classification banned the movie on the grounds it was libelous, but Rushdie himself asked them to reverse the decision. The movie was released in England and fared poorly.

"It is no trick to defend the free speech of somebody whose opinions you agree with or are indifferent to," Rushdie said. "The defense of freedom of speech begins with people who say something you don't like."