How to Catch a Fly Ball

Faced with a fly ball soaring deep into center field during the 1954 World Series, New York Giants center fielder Willie Mays turned his back on the ball, ran straight to the outfield fence, and caught the ball over his shoulder. 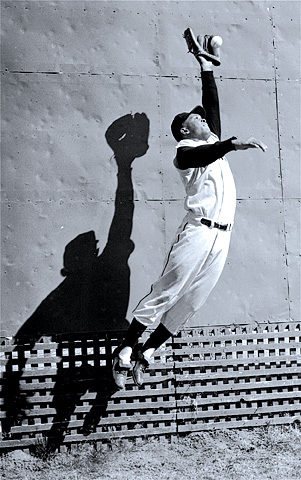 AP Photo/File
Leap Year: Mays soars to snag a fly ball on February 29, 1956.
"The Catch" is among the best-known images in all of sports.

How did Mays do it? By using a virtual environment in which volunteers ran after computer-generated fly balls, Professor of Cognitive and Linguistic Sciences William H. Warren and his colleagues were able to confirm that Mays was really really good at something called optical acceleration cancellation.

Instead of predicting the ball's landing point, the outfielder's eyes continuously track the ball as its visual velocity increases or decreases, allowing the fielder to compensate as he runs backward or forward. Mays' catch is famous precisely because fielders rarely turn their backs on the ball.

"All the fielders need to do is track this optical variable, and it will lead them to a successful catch," Warren says. "They don't have to do a lot of heavy computation in their heads."

Warren said that understanding how outfielders catch fly balls might help coaches advise ballplayers and teach children how to play baseball, but the significance of the finding goes well beyond baseball. In fact, the National Institutes of Health funded the study as part of an effort to understand the visual control of locomotion.

"This is a classic example of visual-motor control, because the limits of human ability are really being tested," Warren says. "If we can understand these key cases, it gives us some insight into how visual control works in more everyday situations."

The finding challenges popular models of visual-motor control that assume people have a model of the world and its physical laws in their heads, Warren says.

Warren recruited eight Brown varsity baseball players and four varsity softball players for the study. Each of the athletes fielded "virtual" fly balls in Brown's Virtual Environment Navigation Lab. Each wore a head-mounted display that allowed him or her to see the virtual ball as it was launched, and they ran freely in the forty-by-forty-foot research space to make their virtual catches. Their movements were consistent with the optical acceleration cancellation theory.

Conducting the research in the virtual-reality lab allowed Warren and the team to test various theories by making the ball fly on a physically impossible trajectory. They then recorded the subjects' head and glove positions to figure out exactly how they were trying to catch the ball.

The digitally altered or physically impossible trajectories that Warren and his colleagues devised for the virtual lab demonstrate that baseball players continuously track the ball and run forward or backward to cancel optical acceleration.

"Catching is clearly a perceptual motor skill that you have to learn," Warren says, "but it does raise interesting questions about why some people are so much better at it than others."

Warren said some individuals may have a greater sensitivity to visual acceleration or may use it to calibrate their movements more precisely.

Whatever the process, Mays had it down cold. "I had it the whole time," he said later of the catch.

Reader Responses to How to Catch a Fly Ball