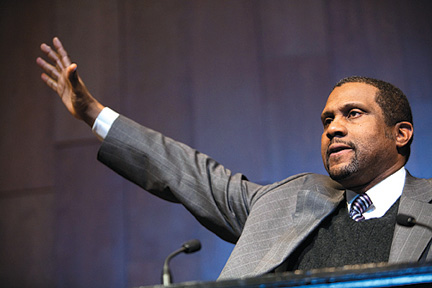 Smiley, who has his own PBS and public radio show, lashed out at the president for the Nobel Prize speech he gave in Norway in December. Obama had spoken of the limits of King's belief in nonviolence, saying, "A nonviolent movement could not have halted Hitler's armies. Negotiations cannot convince al Qaeda's leaders to lay down their arms."

Smiley insisted King would have responded to the threat from terrorism no differently than he did to white racism. After all, Smiley said, if the actions of the Ku Klux Klan and the racists lynching African Americans and setting dogs loose on peaceful protesters weren't terrorism: "I don't know what is."

Smiley said that too often King's admirers ignore the speech he gave in 1967, a year before his death, in which he called the United States, "the greatest purveyor of violence in the world today."

"Some people act like Martin gave only one speech in his life," Smiley said, referring to the well known "I have a dream" speech. Yet King's opposition to "escalating militarism," he said, was as deeply felt as his belief in racial equality. Smiley then pointed to Obama's sending 30,000 more troops to Afghanistan and increasing the defense budget as putting him directly in conflict with King's ideals and values. "It's a dangerous, dangerous thing to have the President of the United States pooh-poohing, diminishing, dismissing the legacy of Dr. King," Smiley said.

Smiley insisted that he remained supportive of the p resident, despite their differences on specific policies. "I want Barack Obama to be a great president," Smiley said. "But great presidents have to be pushed into greatness."