Blame it on Giovanni de' Medici. 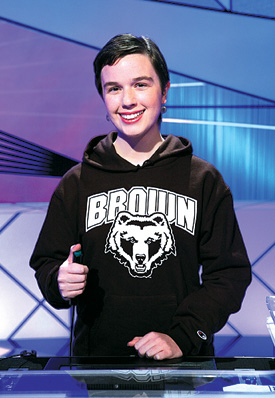 After coming from behind to break the $10,000 barrier and grab the lead during Double Jeopardy, Rebecca Maxfield '13 went back to Portraits.

In an aggressive move, she went straight to the $2,000 answer, the most difficult in the category. But when Agnolo Bronzino's portrait of the child Giovanni de' Medici holding a finch came up on the screen, Santa Clara University's James Hill III pounced, correctly identifying the smug little twerp's sixteenth-century family.

Maxfield, standing in her Brown hoodie, looked as composed as she had since first picking up her Jeopardy! button. After spending time at the trivia website Sporcle.com and watching old episodes of Jeopardy! and University Challenge, an English TV academic bowl game, she'd breezed through the tryouts. So there she was on February 3 opposed by Hill and Penn freshman Robbie Berg in the College Championship quarterfinals.

She started slowly, letting Hill and Berg compete alone for the opening three minutes. But by the first commercial break she'd taken the lead (A: Exercise rail used by ballet dancers. Q: What is barre?). After the post-break chit chat—Trebek: "Rebecca Maxfield ... is like my son, Matthew, who's a freshman also, undecided as to a major. What are you leaning toward, Rebecca?" Maxfield: "I might do comparative literature, because I'm really interested in languages and literatures and also history and art and theater and stuff"—the lead bounced back and forth between Maxfield and Hill. Berg was never really in contention.

Maxfield trailed Hill by a mere $2,600 when Trebek revealed the Final Jeopardy category, Olympic Venues. "Answer: At above 7,000 feet, this Western hemisphere city had the highest altitude ever of a summer Olympics host city."

In living rooms across America middle-aged parents, who were alive in 1968, were feeling smug. Unfortunately, so was Hill, who knew the question—What is Mexico City? Maxfield wrote What is Winnipeg?

For Hill, it was on to the semifinals; for Maxfield it was back to figuring out that concentration on College Hill.

Reader Responses to What's the Question?