The French surgeon peeled off the flesh of the child's face, exposing the skull underneath. Two of the many bones that make up the skull were fused together, deforming the appearance of the face. The doctor used a saw to cut the bones apart, then manipulated them into their proper places. The scalp was stitched back on. 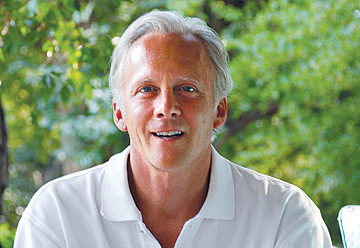 Courtesy Jeffrey Fearon
When Jeffrey Fearon observed this operation, he was completing his surgical residency at the New England Deaconess Hospital in Boston. It was 1982, and this type of facial surgery to fix a birth deformity was just beginning to be performed. The French doctor was one of the few surgeons in the world who knew how to do it. To Fearon, it seemed nothing short of miraculous. "It just seemed impossibly hard to me," he says. "I decided that's what I wanted to do with my life."

Fearon now works in Dallas at the Craniofacial Center as a surgeon specializing in fixing rare birth defects of the skull and face in children. The kids who come to him from around the world have conditions like Pfeiffer syndrome, a genetic disorder in which the eyes bulge, the jaw fails to develop, and the nose becomes beaked; and Apert syndrome, in which the middle of the face is recessed and the child's toes and fingers are fused together. All these conditions have a similar cause—the skull's bones don't separate when the baby is in the uterus and instead remain stuck together. As the child's brain grows larger, pressure builds inside the head, which can lead to brain damage. And then there is the psychological damage that comes from having a misshapen face. "If you don't look normal, you don't get treated normal by others," Fearon says.

About ten years ago, a seven-year-old girl named Torey Harrah showed up at Fearon's office, seeking treatment for Apert syndrome. The middle of her face was sunken as if someone had smashed it down.

As it happened, Fearon had developed a new technique for fixing such a deformity. It involved placing a halo or ring with protruding rods, on the patient's head to keep it stabilized. With the scalp peeled back and the bone fully exposed, a metal bar drops down in front of the eyes. "You turn screws on this bar, slowly pulling the bones of the face forward," Fearon says. It is "brutal-sounding," he adds, but in fact it is harnessing the regenerative powers of the body. "If you pull the bones forward slowly enough," Fearon says, "the body fills the gap left behind with new bone" after several weeks. The surgery was a success and, for the next decade, a camera crew filmed the changes the girl went through as her "new face" took shape. The film, Torey's Distraction, has been shown at festivals in Austin and Dallas.

He says he follows two guiding principles in his practice—he makes time every day to answer his patients' e-mails, and he doesn't turn anyone away for lack of ability to pay. "If I'm a patient, I want to go to a doctor for just that slight advantage in experience," Fearon says. "I want my care affordable to anyone who wants me as a doctor."