What is it that makes reunions as terrifying as public speaking or even death? I recently attended my 30th college reunion at Brown, ostensibly for my 14-year old daughter: I wanted to show her the school, because it’s one less city we’ll have to cram into a grand tour junior year.  But the real reason I went, and insisted my husband put it on his icalendar as non-negotiable, (uncharacteristic, as I generally defer to family wishes), was this: I was sick of fear holding me back. When I turned 50 a year ago, I decided to say “yes” whenever I felt afraid, in order to live the life I wanted. 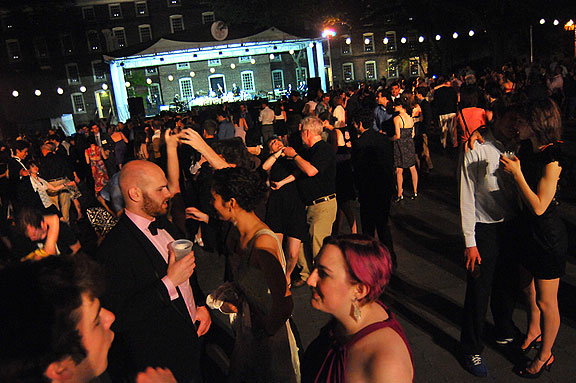 Frank Mullin
Campus Dance 2011.
I had never attended a reunion before because, frankly, a lot of bad stuff happened to me at Brown: my youngest sister got diagnosed with thyroid cancer. Due to an accident, I underwent  leg-lengthening surgeries and spent a year on crutches. I was assigned a janitorial job instead of food services like everyone else on financial aid. Clearing beer bottles from fraternity corridors, I earned the nickname “The Sweep” from shirtless jocks who peered out their doors.

I was green at Brown, coming from an immigrant household, a suburban New Jersey bubble.  I hid in the library stacks and ate dinner alone at 4 pm. Boyfriends? It took until senior year to figure out who the nice guys were and how those human sexuality lectures were supposed to play out in real life. I was so clueless, I identified the wrong 6-foot freshman as John Kennedy, and in my one surge of moxie, jabbered to him at a sporting event, only to learn that the actual JFK Jr. was in Manhattan that weekend.

All this weighed on my mind as I packed for reunion.  I hated my wardrobe, obsessed that I should have insisted on more hair spray in my blow out that morning, wondered why on earth I didn’t get a leg wax. I would have to pull out stray hairs with a tweezer in the car ride up.

My angst got so heavy during that five-hour, traffic-ridden journey that I couldn’t speak. I closed my eyes and tried to meditate, but all I could think about was how much longer until the alcohol flooded my veins.

We arrived late, changed into dress clothes at the hotel (I forgot my compact and had to use lip liner for blush), and rushed to campus for the Class of ’81 Welcome Dinner.  We had missed cocktails and mingling, and all these serious-looking people were ensconced at dinner tables that appeared like fortresses to me.  The three of us sat by ourselves at an empty table. My husband handed me a white wine from the open bar. I gulped it, swiveling my neck left and right as if I needed an exorcism. Finally, I spotted my former roommate.

I had the foresight to meet her for lunch in Manhattan the week prior, so I didn’t have an aneurism as I approached. Besides, she is a psychiatrist and has that comforting temperament that makes you want to lie down and spill. My roommate has done a better job attending reunions than I have, probably because her husband is an alum, too.  She sat a table of old friends but, bless her, rose to chat and meet my family.  She confessed that her mid-life resolution has been to get in touch with people she’s let go of, and I was at the top of her list.

A tall, attractive woman swept over to us with a big, open smile. “Stacy?”

“Hi!!!” I said, unable to place her. If you told me she worked out at my gym, I’d have believed you. But that’s the thing about 30th reunions: no one bats an eye at senior moments. I found out her name soon enough, and recalled feeling warmly toward her. She told us this reunion story: she had attended our 25th, five years prior, with her marriage in a nose dive. Being back at Brown reminded her of who she was. The marriage ended soon after, and here she was at our 30th with a new love, happier than ever.

“Wow, she really shared,” I said to my roommate when we were alone.

“That’s the thing about reunions when you’re our age,” she said. “Nobody’s trying to impress, everyone’s been through ups and downs.”

I sought out a classmate who had always been super-friendly, and after hellos, she exclaimed, “I’m the only one in the room with a five year old!” She almost didn’t come because of a broken nose--her daughter whacked her with a golf club.  Another classmate and I worked at the same ad agency for a stretch in the 90’s. We had discussed our common alma mater, but never that we were in the same class. I hoped I had been nice to her in those tense days of working in a business that never suited me.

Luckily, there were no ex-love interests in the room (I know, I got off easy).

Anastasia Rubis has published journalism in The New York Times and The New York Observer, in addition to the Huffington Post. A 13-minute documentary film entitled "Breakfast, Lunch, Dinner: The Greek Diner Story" which she co-created and directed can be seen on YouTube.  A digital story called "Home" about my ancestral Greek village can be seen at storiesforchange.net.  She is currently at work on a collection of linked short stories.

With dinner over, my family ventured outside to Campus Dance. It was magical: 11,000 people, 80 degrees, the night illuminated by paper lanterns, a swing band on the main green, a rock band on the lower green. Cheap wine in plastic cups, porta-potties. My husband found the 30th reunion tables (out of a mere 1120), and he and my daughter dove into their cell phones. I scanned the crowd until I finally located Josh (let’s call him), the boy I had shared both high school and college with. “I’ll be right back,” I said to my peeps, not feeling mother-guilt because the night, for a change, was about me.

Josh was still throwing back drinks as if these were his rugby days.  We hugged. “You look ten,” he said, shaking his head.

“They got bored and went to sleep.”

I briefly introduced him to mine. “How old are you?” he asked my daughter, and when she said 14, he grinned. “That’s exactly how old your mother was when I met her.”

One drink, a few reminisces, promises to keep in touch. I ribbed him about how rich his hedge fund had made him, and that I’d heard he was a top donor.

My family wanted to call it a night. I agreed, satisfied that I had conquered social anxiety so monumental, it could be a TV ad for Paxil.

The next day, we ate breakfast in the school dining hall. What an idyllic campus. (I went here?)  My architect husband was astonished at the preservation of the buildings, “on par with Williamsburg,” he said.  I pointed out the Toad Hall frat where I was “The Sweep.” My daughter’s eyes widened at the very idea of holding a job, I imagine.  She asked to see the library. I took her to the Rock, to the stacks where I nerded out, worried that I would never earn A’s in college.  My husband snapped a picture of us at a carrel, me hugging Kassandra on my knee.

She wanted to sit in on a class (like Rory on Gilmore Girls), so we attended the BAM forum on the future of book publishing in Salomon Hall. For lunch, we hit Chipotle on Thayer Street. Then the new arts building, whose modern design my husband was so-so impressed by.

We left at five, making the visit less than 24-hours. I wasn’t ready to go. For one thing, I hadn’t bumped into classmate Rick Moody, and I had spent the week rereading The Ice Storm so I could make scintillating conversation. But my daughter needed to study for finals, so we skipped the class dinner Saturday night, and most disappointingly, the procession with graduating seniors Sunday morning.

Still, there was this highlight: just before departure, I led the family toward Wriston Quad where a video booth had been assembled. “Alumni: Share Your Brown Stories,” a sign advertised. I had noticed the booth earlier, and resolved to participate, not for the iPad2 they were raffling off, but because there was a story taking shape inside me, bubbling up to be told. Against a green screen, not knowing where to direct my gaze, shifting between videographer and camera, I said: “Brown reminds me of my father. He and my mother were immigrants from Greece. My father grew up in a two-room house playing soccer with no shoes. When I went to Brown, my parents were very, very proud and they loved to visit. My father especially, would be all excited and want to do everything Brown: eat at the Ratty, shop at the bookstore for any kind of paraphernalia, Brown watch, sweatshirt, windbreaker, you name it. He died twelve years ago, but I remember his pride and his excitement every time he visited here.

I felt a sense of “mission accomplished” exiting the video booth, as if I had come not only to reconnect with old friends and campus but to reconcile the bad stuff that had happened along the way.  The final vestiges of fear melted away in the act of honoring George, my father and support, at this video booth ironically located on the corner of George and Brown Streets.

This is why I will go to my 35th: because reunions, it turns out, are chances to unburden ourselves of memory, to reconfigure and rewrite it with wisdom gained the hard way, along the way.  As if to affirm the positive spin that I decided—because in many ways, we do decide—to put on my past, on Brown, I returned home to this message on the answering machine:  “Hi! I interviewed you today at the alumni video booth. You won our iPad2! Thank you for sharing that wonderful story about your father.”

One of the first things I’ll do with that iPad is upload photographs of reunion weekend, especially the one of my daughter standing at the Van Wickle Gates with her dad, exactly where I stood 30 years ago on commencement weekend with mine.  A reminder of the fluidity of time and space, and that the stories we tell ourselves of the past, present and future can be fearless, can be yes.

Anastasia Rubis has published journalism in the New York Times and the New York Observer. She cocreated and directed a thirteen-minute documentary film entitled Breakfast, Lunch, Dinner (The Greek Diner Story), which can be seen on YouTube. She is currently at work on a collection of linked short stories. A slightly different version of this essay appeared on the Huffington Post.

Click here to watch short videos of Rubis and other alumni recalling their years at Brown.