By 10 a.m. on September 11 Selim Suner '86, '92 M.D. was on a conference call with officials from the federal Office of Emergency Preparedness. Suner, the commander of the Rhode Island Disaster Medical Assistance Team (RI DMAT-1), was receiving deployment instructions. Meanwhile, fifty-six physicians, nurses, medics, and logistical personnel--the members of Suner's team--were arranging coverage for their day jobs. Bags were being packed and child care arranged, as RI-1 prepared to head for the worst disaster in U.S. history. 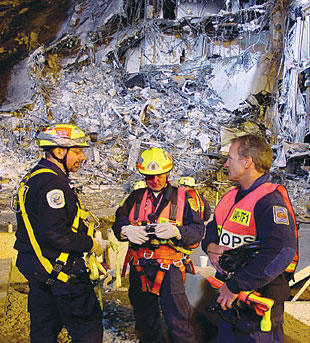 By 11 p.m. four trucks had been loaded with field hospital supplies, and shortly after midnight RI-1 was under state-police escort to Stewart Air National Guard Base in Newburgh, New York, the rendezvous point for all federal rescue efforts into Manhattan. In addition to Suner, an emergency medicine physician at Rhode Island Hospital and an assistant professor of surgery at Brown Medical School, the team included Brown faculty, staff, and medical students. (I am one of these students.) I had been in Pittsburgh that morning and had spent the day helping with medical logistics for the rescue effort at the crash site of hijacked United Airlines flight 93 eighty miles to the southeast. When the call from Rhode Island came, I drove overnight to Stewart to join RI-1.

Only a few weeks earlier, Zachary Litvack '98, also a student at Brown Medical School, had completed a community-health project on urban terrorism under Suner; on September 11 he left his third-year psychiatry rotation to join the Rhode Island team. And Kristina Robinson '98, a medical student at the University of Vermont, left the anatomy lab in Burlington to become the first RI-1 team member to arrive at Stewart.

The team arrived at Stewart at 4:30 a.m. on the morning of September 12. Members settled onto cots in an aircraft hangar to grab a few hours of sleep. At 7 a.m. Suner began coordinating RI-1's plans with those of other teams. All day long more trucks rolled in, and that evening 400 U.S. Army personnel arrived and the first wave of disaster medical assistance teams departed for ground zero in lower Manhattan.

Again under state-police escort, RI-1 joined a convoy of vans, trucks, and other emergency vehicles driving down Second Avenue to the cheers of thousands of New Yorkers. Finally the convoy arrived at a staging area that had been established at the Chelsea piers. It was here that New Yorkers were constantly dropping off whatever they could think of that might be helpful: water bottles, dry socks, containers of hot coffee.

The primary mission of DMAT teams is to provide mobile, hospital-level, on-scene care during disasters; RI-1 immediately joined two similar teams from Massachusetts and one from New York to set up a three-tent field hospital two blocks north of the mountain of debris that had been One World Trade Center. A nearby deli was converted into a medical center. Burn-unit nurses were quickly dispatched to Columbia Presbyterian Hospital, where the worst burn victims had been sent. Each team worked an eight-hour shift every thirty-two hours. Unfortunately, there were no survivors of the terrorist attacks to treat; instead the teams treated about 150 rescue workers a day, most of them suffering from respiratory problems, burns of varying degrees, cuts, and gashes. There was even a broken leg or two. In addition, some paramedics were placed on alert to support the New York Police Department in the event of any further attacks or arrests in the area.

When the team was off-duty, members explored the area. The scene at ground zero was too horrible to be real. Fire trucks had been crushed flat. Hundreds of workers swarmed among huge cranes. Dogs wearing metal shoes ducked into the wreckage, scrambling in search of survivors; some of the dogs were fatally cut on the jagged steel. From time to time a whistle would sound, and everyone would be silent in case more whistle blasts followed, ordering an evacuation as the piles threatened to collapse. Everywhere were scenes of camaraderie, exhaustion, and purpose. Under the unrelenting daylight of a million watts of halogen lamps, workers too tired to lift another piece of metal yet too dogged to leave slept on floors, in cars, or on the street. Firefighters lay on their coiled hoses and dozed.

Much of the work in the field hospital was made up of administering breathing treatments, cleaning eyes, and sewing up wounds. Dust constantly swirled around the team, and all food and drink was covered as a precaution against asbestos contamination. Despite the enormous resources that had been trucked in, a thick sense of helplessness settled over the site. Every work shift was an emotional roller coaster, camaraderie and pride alternating with horror and sorrow. Nearby, hundreds of construction workers were lined up, waiting for their turn at the crumpled towers.

After two weeks at ground zero--the limit of a team's supplies and endurance--RI-1 worked its last midnight to 8 a.m. shift, packed its gear, and began the long, sad drive back to Providence. For the men and women of RI-1, it was time to go back to work, to school, and to family.