When Lydia Stein '09 was an undergraduate studying art, she lived in an apartment across the interstate from campus on Smith Hill, a down-on-its-luck residential neighborhood behind the Rhode Island State House. As a student, she says, she thought a lot about how to be an artist who is "relevant to society." Stein found that balance with fellow Brown alumnus Christian Caldarone '07 AM. Together they've spent the past two years helping revive Smith Hill, where they both live, by painting murals on vacant houses awaiting renovation. 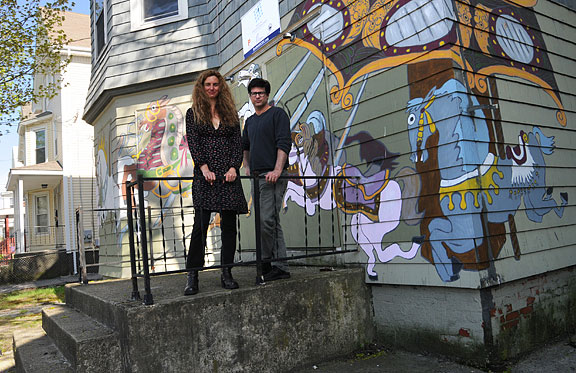 Frank Mullin
Temporary Art: Lydia Stein, left, and Christian Calderone with one of the murals Stein painted on Smith Hill.
The first of those houses, at 16 Bernon Street in the Pekin Street Historic District, was a magnet for drinking and graffiti when the Smith Hill Community Develpment Corporation (SHCDC), which Caldarone directed, bought it in 2009. The house became part of Visions II, a project whose goal was to restore about twenty foreclosed-upon houses the corporation had purchased to turn them into high-quality, affordable apartments. But, until enough capital was raised, Caldarone says, "the most we could do was cut the grass."

So Caldarone, who was among the first Brown graduates to earn a master's in urban education policy, approached Stein with the idea of turning the boarded-up houses into art while they awaited renewal. Having painted murals since she was eighteen, Stein was tantalized by a canvas the size of a house. Since the painting was to be temporary, Caldarone tempted her further by promising, "You can do anything you want!"

Wrapped around two sides of the house today is Stein's mural of wooden carousel horses breaking free of their circular prison and morphing into huge, half-human, half-horse beings. Naming the mural project HousEART, she and Caldarone scrounged up partially used cans of paint from city offices and local paint stores. They invited local kids to work on the mural after school, and older neighbors started stopping by to offer encouragement and help. While Stein's androgynous satyrs didn't appeal to everyone ("I did catch some heat," Caldarone admits), the mural has been defaced just once in the two years since it was painted. "A true testament to the idea," he says.

The pair followed the first HousEART mural with three more on Smith Hill. Two other local artists worked on them, and last year Stein received grants from the State Arts Council and the Providence Development Department to expand the project statewide. That enabled her to coordinate seven more projects and to pay professional and student artists to work on them.

"This project has really helped me feel better about having a role in society," Stein says. For his part, Caldarone says he has been excited to receive calls from urban development groups as far away as Los Angeles seeking to emulate HousEART in their own neighborhoods.

Going forward, Caldarone and Stein say they intend to keep it simple. Since it started in 1993, the Smith Hill CDC has renovated eighty-five houses, and 16 Bernon is moving up on the list. That means Stein's carousel will come down and a family can move in, a rare occasion when removing a work of art is a cause for celebration.

A vacant house in a run-down neighborhood, Caldarone says, is "a symbol of greed, of no accountability." The mural, he adds, "transforms it into a symbol of hope."

Alexa Trearchis is a BAM intern.

Reader Responses to Murals of Hope