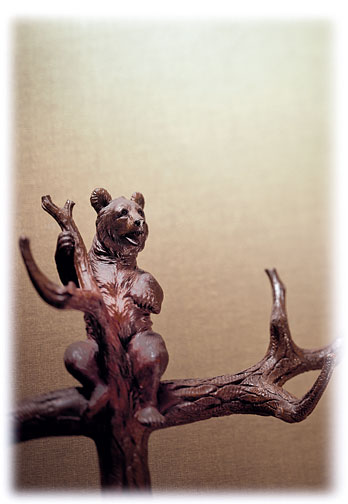 The story of this hat rack and umbrella stand starts in Germany's Black Forest, where, legend has it, an anonymous craftsman carved it from a single tree. In 1955, its owner, John Kiely, a member of the class of 1911, gave it to Brown and it was put on display at Alumni House, on the corner of Brown and Benevolent streets. At some point though, David Zucconi '55, who worked at Brown for more than forty years, took a liking to the stand and placed it in his office. Zucconi, a beloved figure who was known around campus as "Mr. Brown," held a variety of positions at the University, from admission officer to executive director of the Brown Sports Foundation. But whenever he changed office, he always took the sculpture with him.

Zucconi died in 2003, and his wife took the stand with her as a remembrance when she moved to Florida three years later. It was shortly after this that Brown's sports archivist and family friend Peter Mackie '59 began gently asking her to return the item to campus. This year, with the new David J. Zucconi '55 Varsity Strength and Conditioning Center set to open in 2012, she decided to give it to Brown. The bear has returned to its original role as a curiosity for visiting alumni, this time at the entrance to the Maddock Alumni Center, just to the south of the College Green.

Reader Responses to The Prodigal Bear