The Right to Self-Rule

East Los Angeles means many things to many people. It's where the Chicano political movement of the 1960s and 1970s was born. It's where actor Edward James Olmos and boxer Oscar de la Hoya grew up. And, along with its surrounding neighborhoods, it houses the highest concentration of people claiming Mexican heritage outside Mexico City. 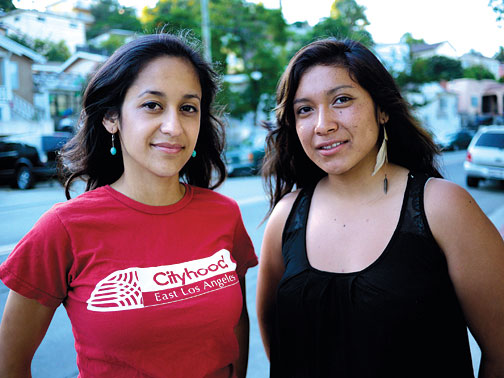 Courtesy Ana Mascarenes
Mascarenas, left, with voluteer Maria Ramirez.
But the one thing East L.A. is not is its own city. Despite eighty years of lobbying by its residents, this seven-square mile neighborhood remains governed by the same Board of Supervisors that rules the rest of Los Angeles.

Ana Mascareñas wants to change this. As a board member of the East L.A. Residents Association (ELARA), she is fighting to create a self-governing independent City of East Los Angeles. She believes the interests and needs of the low-income community there are overlooked or ignored by the county. You have to look only as far as the neighborhood's underfunded schools or contaminated drinking water to see that, she says.

Between the 1940s and the 1970s, five highways were built through East L.A., more than in any other community in the city. Mascareñas says this would never have happened if East L.A. had had a greater voice in its own development.

Mascareñas grew up in Albuquerque, New Mexico, the daughter of Mexican Americans. Her mother was raised a farmworker in California's Central Valley and taught her children about civic values, historical icons, and such civil rights advocates as Cesar Chavez.

At Brown, Mascareñas majored in human biology and sociology. Outside class, she danced and played guitar for MEZCLA, the Latino performing arts group, and co-founded a mariachi band.

When Mascareñas moved to L.A. after graduation, she searched for housing in many different neighborhoods, but finally settled on a house in East L.A. that, she says, "felt like home." Shortly after moving in, she attended a neighbor's housewarming party and met Oscar Gonzales, an East L.A. native who was then the ELARA president. He explained to Mascareñas ELARA's campaign to get East L.A. incorporated as its own city.

"I was shocked when I learned that East L.A. was not a city." she says. "I grew up hearing it was this place of pride, but then I realized it's been suffering from neglect." Mascareñas started as a volunteer with the group and in 2007, became a board member.

Strong political opposition to making East L.A. its own city has always existed, mostly among business owners, landlords, and some homeowners who fear that establishing a new local bureaucracy to govern the area will lead to higher taxes. Efforts to incorporate as a city were defeated in 1931, 1933, 1961, 1965, and 1974. But Mascareñas believes that support has grown in recent years.

Mascareñas has been involved in everything from devising a campaign strategy for ELARA to organizing volunteer meetings and fund-raisers. Through carwashes, Mexican menudo soup breakfasts, and receptions in East L.A. and Washington, D.C., ELARA has raised hundreds of thousands of dollars and obtained support from local politicians.

Several administrative and bureaucratic obstacles remain, but Mascareñas says she has no intention of giving up anytime soon. "Self-determination is long overdue," she says.

Reader Responses to The Right to Self-Rule