Asked to explain how he's lasted for nearly fifty years as an attorney at the U.S. Department of Justice, David Margolis answers bluntly: "I rely on guile, bluff, balls, and the good work of my colleagues, not to mention some luck." 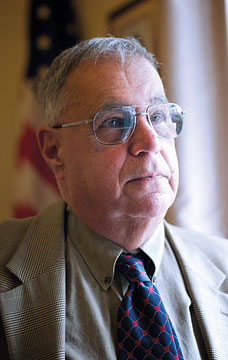 Courtesy David Margolis
"If I retired, it would make too many people happy," Margolis says.
It's a strategy that's worked well. Margolis has served under nine presidents, and in recent years he has handled some of the most important legal cases in the country. In 2006, on the occasion of his fortieth anniversary at the Justice Department, his boss, former Deputy Attorney General James B. Comey, offered another explanation for Margolis's long survival:

Margolis grew up wanting to be a rock 'n' roll deejay, but his father, a politician and Board of Education official in Hartford, Connecticut, insisted he become a lawyer. At Brown, Margolis earned a degree in sociology, considered a career in politics, but then followed his father's advice and went to Harvard Law School.

Margolis first worked in the U.S. attorney's office in Hartford, prosecuting organized crime. Just four years into his job, an escaped bank-robbery suspect called him up and offered to surrender if Margolis met him at a deserted baseball field. He turned out to be armed, and Margolis spent the longest fifty minutes of his life convincing the fugitive to put his gun away and turn himself in.

The Hartford Courant, which covered the story, described Margolis as a man with long sideburns and a penchant for "modish clothes." At the time of his face-off with the escapee, the repoter noted, Margolis was wearing an "Edwardian suit." "I don't fit into that stuff anymore," Margolis says, "but I cut quite a dashing figure back then."

Margolis did stints in U.S. attorney offices in Cleveland and Brooklyn before arriving in Washington in 1976. He's been there ever since. He says he's always been careful to keep his political views to himself. "I will tell you that it's been reported that I still consider myself a Democrat," he says. "I don't know how they got that, but I would not affirm or challenge that label. You can't wear your politics on your sleeve, especially in my business."

In January 2010 Margolis made one of the most controversial decisions of his career. In a sixty-nine-page memo, he ruled the two authors of the Bush administration's notorious torture memos—Jay S. Bybee and John Yoo—hadn't committed professional misconduct. Although the memos were flawed, Margolis determined they'd been crafted in a deliberative, responsible way. "David Margolis Is Wrong," the online magazine Slate thundered in a headline.

If there is one blemish on Margolis' record, it happened in 2006, when the Bush administration fired seven U.S. attorneys for what were widely perceived as partisan reasons. Margolis wasn't directly involved in the decision, but a report by the Justice Department's inspector general said he didn't do enough to stop the firings once he found out about them. "I should have inserted myself. I was too passive," Margolis later told Congress.

Margolis has three grandchildren and is a huge fan of the Yankees (although he roots for the Washington Nationals now, too). But none of this, he says, could lure him away from his job. "If I retired, it would make too many people happy and I don't want that," he says. "I have memorabilia all over my office, and if I crap out, somebody else will have to clean it out. Whereas if I retire, then it's my responsibility. So I'm better off dying on the job. Not soon, but eventually."