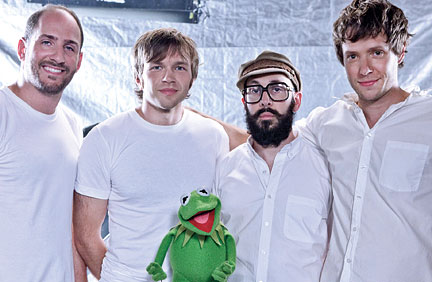 Damian Kulash '98, right, and his OK Go bandmates have teamed up with Kermit the Frog, Miss Piggy, and the rest of the gang to sing the show's theme song for a new Muppets movie, due out in November. The soundtrack, The Green Album, was released in August, as was a music video, which instantly went viral on YouTube. The band's previous videos have achieved cult status in the music video world: they've performed on treadmills, sported LED-lit suits, and used a warehouse-sized Rube Goldberg contraption as a gargantuan percussion instrument. In this one, they get to sleep (or attempt to) with a bedful of Muppets.
What do you think?
See what other readers are saying about this article and add your voice.