Where most people see a worn-out T-shirt, Hannah Winkler '13 and Tara Noble '12 see the raw materials for a tote bag, miniskirt, or apron. In April, Winkler and Noble, with the help of the Brown Student Agency, founded the Vault, an on-campus clothing exchange and "upcycling" workshop center. 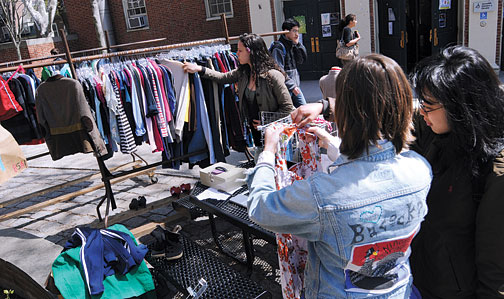 Frank Mullin
Students rifle through old clothes given new life by the Vault. They can also learn to upcycle thier own castoffs.
Upcycling is the process of improving while recycling—adding buttons, converting long-sleeved shirts to tank tops, and transforming pants into cuffed shorts. Noble says the concept is based on the idea that "you can fix up what would otherwise go to waste and put it to better purpose with your skills and creativity."

Since opening, the Vault has held four sale days on the College Green, received forty-seven clothing donations, and made over $500 in revenue, about half of which is profit. Students can poke through racks of lost vintage "treasures": 1970s floral skirts, worn jean jackets, and a yellow lace shift. The Vault also sponsors upcycling workshops, at which Winkler and Noble provide sewing machines and technical assistance so that students can upcycle their own wares. The two women will explain the difference between basting and hemming, or help anyone cut a pattern to change a flannel shirt into, say, a plaid skirt.

Winkler, a visual arts concentrator, learned to sew from her mother, then further honed her craft while working at the Brown costume shop, where students make costumes for on-campus theater productions. Noble has more belief in the cause than sewing skills. "I am just a linguistics major," she says, "who happens to think this is something needed at Brown."

The Vault hopes to find a permanent campus space that can double as a workshop. "We have made a promise that this will continue after we graduate," Winkler says. "We hope that it's here when we come back for our twentieth reunion."