She was out of school only five years and had already accomplished what others strive to do in a lifetime. 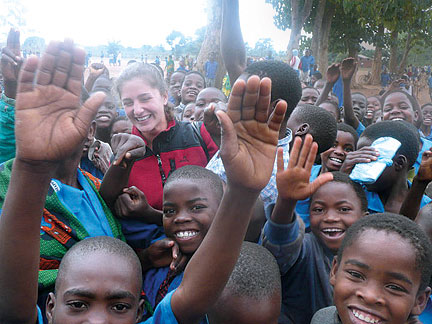 Courtesy Kavazanjian Family
Laura doing field work as a research fellow for Save the Children in Malawi.

Laura Kavazanjian returned to campus in May to celebrate what was supposed to be a happy milestone in her young life: her five-year reunion. Instead, on May 28, after attending Campus Dance with her fiancé, David Reidy '06, she was killed in a car crash on Interstate 95 in Groton, Connecticut.

A political science graduate and former field hockey defensive back at Brown, Kavazanjian had recently completed a master's in international education policy at the Harvard Graduate School of Education and was working as an education research assistant there. She was planning to work for a nongovernmental organization in Washington, D.C.

Kavazanjian had already spent a year in Beijing teaching English to third- and fourth-graders; another year and a half in Mumbai, India, working as a program officer for the William J. Clinton Foundation's HIV/AIDS Initiative; and six weeks during the summer of 2010 conducting education research in Malawi with Save the Children and CARE USA Power to Lead Alliance. Her program aimed to develop leadership among adolescent girls in six countries.

Kavazanjian's father, Tom '75, notes that his daughter was passionate about helping women in the developing world get an education. Her mother, Jan, says, "What she really valued in her life was her ability to get a great education as a girl, and she wanted to offer that to other girls."

Brown field hockey coach Carolan Norris, in conjunction with the current field hockey captains, stated in a letter to the community that "Laura was an incredibly positive force on campus and for the field hockey team during her time at Brown. . . . She was an amazing Brown Bear with an inspiring mission." The October 15th game against Princeton was played in her honor, and the Best Defensive Player award will now carry her name.

In addition to her fiancé, Laura is survived by her parents, Tom and Jan Kavazanjian, of 12 Brewster Hill Rd., Setauket, N.Y. 11733; a sister; and numerous friends.

Reader Responses to An Incredible Force