When Ruth Bader Ginsburg entered Harvard Law School in 1956, she was one of a handful of women in a class of 500 students. The dean invited the women to dinner. “And we thought, ‘Oh, how thoughtful,’” Ginsburg recalls. Then “the dean brought us into his living room and called on each of us to tell him in turn why we were at the Harvard law school occupying a seat that could be held by a man.” 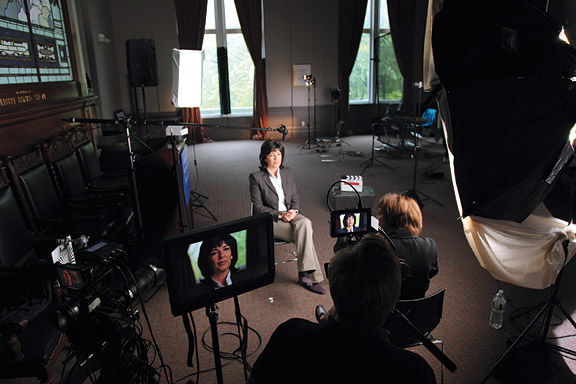 Anna Belle Peevey
Betsey West '73 interviewed hundreds of women leaders, including CNN's Christine Amanpour.
Ginsburg tells this story in Makers, a documentary video project coproduced by Betsy West ’73 about the contemporary women’s rights movement. In the four-minute-long video, Ginsburg talks about her experiences as a young mother, a women’s rights activist, and, ultimately, as the second female U.S. Supreme Court Justice. Hers is one of hundreds of stories that West and her colleagues are archiving online.

“Our mission was to capture the stories of groundbreaking women before it’s too late,” West says. “With Betty Friedan, Shirley Chisholm, and other female leaders having already passed from the scene, there was an urgency to tell the story.”

A cross between oral history, documentary film, and an interactive, ever-growing video archive, Makers.com has garnered 21 million video views since it went live early this year. Drawing on the classic feminist philosophy that the personal is political, the project aims to compile the history of, in West’s words, “one of the biggest social transformations in the twentieth century” from the point of view of individual people.

Those “women who make America,” as the Makers tagline describes them, are a varied bunch, ranging from Ginsburg, Hillary Clinton, and Ruth Simmons to the first woman to run the Boston marathon and the first female chief scientist at NASA. As the archive grows, West and her colleagues will edit the videos into a three-hour-long documentary narrated by Meryl Streep. It is scheduled to air on PBS early next year. 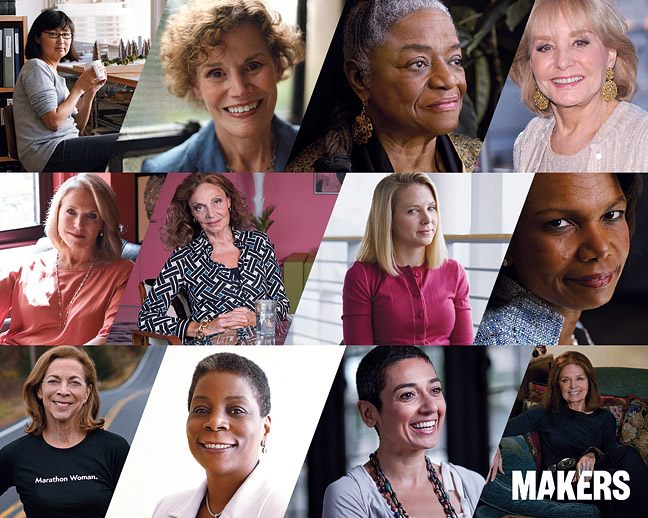 West, who would go on to become a Brown trustee, and her female colleagues just shrugged it off, she says. Class action lawsuits filed against Newsweek and The New York Times in the early 1970s had forced news organizations to hire women as reporters for the first time, and West says she was acutely aware that “I had opportunities that women even five years before me didn’t have.”

West began her career at ABC News, helping produce World News Tonight, Prime Time Live, and Nightline. She spent several years in London overseeing Nightline’s foreign coverage before returning to New York City as an executive producer. In 1998 she moved to CBS News, where as senior vice president she oversaw 60 Minutes and 48 Hours and was in charge of the Emmy Award-winning documentary 9/11.

As a news producer, West covered major historical shifts: the fall of the Soviet Union, the end of apartheid, and the early days of Islamic fundamentalism in Egypt. In the early 1980s, she reported on the demise of the Equal Rights Amendment, and so it is fitting that one of the interviews in Makers is with Phyllis Schlafly, the conservative activist credited with killing the amendment. In an old news clip, a younger Schlafly argues that the ERA would “take away the right of a wife to be supported by her husband in a home provided by her husband.”

Including Schlafly and other conservative women was important to West. “I don’t want this to be a glowing, uncritical look at the women’s movement,” she says.

Reader Responses to A Feminist Archive