On April 6, 1921, as many as 15,000 people gathered in front of Rockefeller Hall, as Faunce House was then known, to hear speeches by President Faunce and a handful of military officers. It was the fourth anniversary of the nation’s entry into World War I. 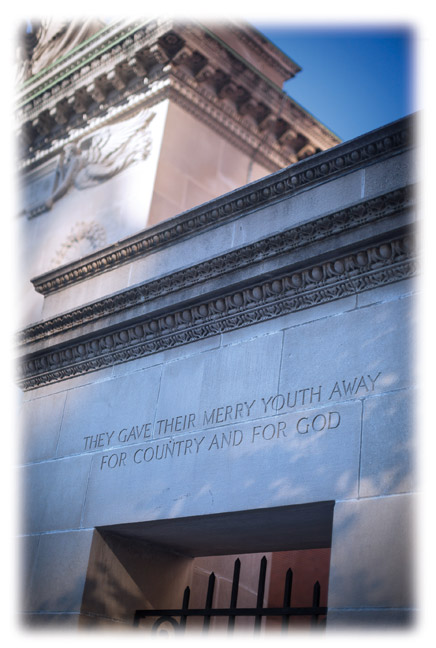 All had gathered to dedicate Soldiers Memorial Gate, or Soldiers Arch, as it is more often known. Built in the plain style of a Greek temple, the memorial contains the names of the forty-two men of Brown who’d died in the war. The inscription in this photo of the gate is from the poem “The Spires of Oxford,” written in 1917 by the English poet Winifred M. Letts.

A new memorial was added in 1997 to honor the 205 alumni who died in World War II and the Korean and Vietnam Wars. Given the obdurate nature of war, it’s sobering to note that other memorials will no doubt be added over time. No ivory tower can shield young men and women from battle.

These days, Improvised Explosive Devices kill or maim more U.S. combatants in places like Iraq and Afghanistan than anything else. But in World War I the biggest killer was the flu. The war coincided with a worldwide influenza pandemic that killed 675,000 Americans. In fact, it’s thought that only one of the men on the original memorial died in combat. Influenza took the rest.

Reader Responses to The Fallen