The Rule of Law

Ben Hernandez-Stern ’03 works in a cubicle in a nondescript government office building in Washington, D.C. One of several lawyers handling civil rights complaints for the U.S. Department of Health and Human Services, he specializes in cases involving people with such communicable diseases as AIDS and tuberculosis.

The work brings lots of small satisfactions. He recently handled a Texas case in which a doctor refused to interact with a patient who tested positive for TB. The doctor had to undergo additional training and, as a gesture of good faith, write a referral for the patient that he’d previously refused to give. 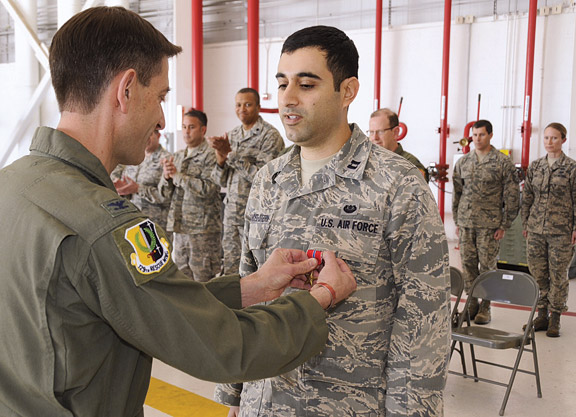 But only a year ago, from March through August of 2011, Hernandez-Stern worked at a very different kind of government job: he brought terrorists in Iraq to justice for the U.S. and Iraqi governments. As chief of prosecution for the U.S. defense department’s Warrant Prosecution Task Force, he worked with U.S. troops and Iraqi security personnel to capture and bring to trial suspects accused of terrorism.

“The work was time consuming and difficult,” Hernandez-Stern says. “but given the gravity of the crimes, I was highly motivated.”

For his service, he was awarded a Bronze Star. In a statement released at the time, the defense department praised him for conducting more than forty-five missions “into imminent threat areas” and obtaining warrants to detain more than 1,000 terrorist suspects. For national security reasons, he can’t provide many details of his experience except to say that the best moment during his entire tour of duty was “when I was in Baghdad International Airport, and I was going back to the States. There was a tremendous amount of relief.”

Hernandez-Stern grew up in Los Angeles. The 9/11 attacks happened during his junior year at Brown, and Hernandez-Stern, a history major, felt a call to duty. The next year he joined the California Army National Guard and, six days after graduation, went through basic training. While attending Stanford’s law school, he switched to the Air National Guard.

In 2009, under the protocols of the Strategic Framework Agreement signed between Iraq and the United States, U.S. forces were required to seek arrest and search warrants from Iraqi courts before apprehending suspects. Just what proof the courts would require wasn’t clear, though. Nor was the U.S. military prepared to hand over all its evidence: many of the relevant documents were considered classified.

These were just a few of the obstacles Hernandez-Stern faced when he arrived in 2011. He won’t talk about his own time in the country, but press reports indicate there was plenty of confusion. American soldiers were unused to doing law enforcement. Witnesses were afraid to come forward. Iraqi judges sometimes refused to participate in court proceedings because they feared retaliation if they were seen cooperating with the Americans.

“It was extremely rewarding work,” Hernandez-Stern recalls. “I got to work with incredible people and address life-and-death issues. I was just happy to contribute.” When asked about winning the Bronze Star medal, he insists: “There are people who contributed a lot more and didn’t receive one.”
Eight times a year, Hernandez-Stern, who is still in the National Guard, flies from his Washington, D.C., home to Moffett Federal Airfield in California to provide legal services to military personnel on the base. His cases nowadays usually involve prosecuting petty crimes and helping recruits with divorce and custody battles, mortgages, and estate planning.

As for his day job handling civil rights complaints in D.C., he says he finds it plenty satisfying, however many hours it means spending in a cubicle. “I get to work on policy matters that are affecting the lives of Americans,” he says. “You couldn’t ask for more as an attorney.”

Reader Responses to The Rule of Law