Glass artist Steve Weinstock arrived at Brown in 1983 intending to become an engineer. However, he says, “I took one engineering class and realized I didn’t want to do it.” The class wasn’t entirely a waste, though: one day, while he was wandering the corridors in the basement of Barus and Holley’s labs, a handwritten cardboard sign labeled “Holography” caught Weinstock’s eye. It led to the holography lab, where Weinstock put his name on the waiting list for Professor Hendrik Gerritsen’s class on the subject. It changed his life. 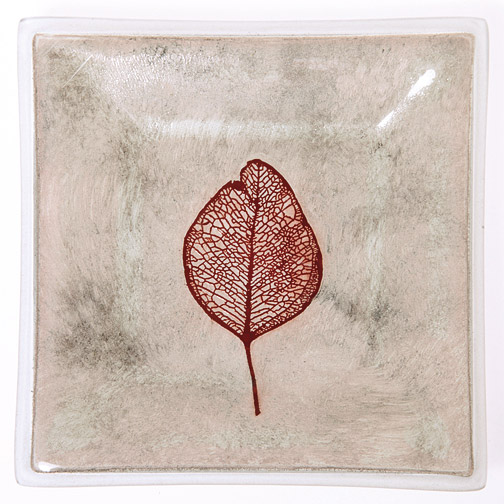 Joel Benjamin
Steve Weinstock '87 fuses glass with minerals to create one-of-a-kind dishes and platters. Fallen Leave dish: $50. Use code BRUNO1235 for 35% off (expires 12/31/12).
alchemyglass.com
Now ubiquitous, holograms are those three-dimensional optical watermarks embedded in credit cards, driver’s licenses, and greeting cards. In the 1980s the technique was still fairly new (the inventor had won the 1971 Nobel Prize in physics), and although Weinstock’s holograms weren’t particularly successful, “They were pretty,” he says. And they led him to his passion: glass.

“My holograms were all about detecting light in something that wasn’t physically there,” he says. “Glass was invisible, but it was still physically there.” He switched his concentration to studio arts and, using the glass studios at RISD, made sculptures in which a hologram projected color and light into the glass.

In 1991, Weinstock flew to Prague to show his work at an arts festival. The country had recently been reopened to tourists after the fall of the Communist government, so he was able to visit the town of Železný Brod in Western Bohemia, a hub for traditional glassmaking.

“Everyone was involved in the glass industry,” he says. “The junior high had a show with some of the most amazing pieces I’ve ever seen.”

Weinstock was drafted into helping set up a glass business in Prague. “I was an artist,” he says. “I had no experience with [starting a business], but it was all fun learning.” He was inspired to return to the United States and begin the process again, this time for himself.

In 1992, Weinstock founded Alchemy Glass & Light in Los Angeles with fellow glass artist Michael Murphy. They started out making light fixtures, but, when a client asked them to make a glass sink, they struck gold. Their one-of-a-kind vessel sinks, designed to sit on top of a counter, were an immediate hit with architects, interior designers, and, ultimately, the public. “Fortunately for us, the fashion sort of took off,” Weinstock says. Now, Alchemy’s product line ranges from sinks to light fixtures, mirrors, and tableware.

Each piece is unique because fusing glass is unpredictable. It involves layering glass and minerals—often copper—and heating them, which produces the luminous colors. The temperature, humidity, and other factors all influence the final results. “The natural color [from the minerals in the glass] works in the way a butterfly wing has color,” he says. “Depending on how you look at it, or how the light hits it, the color changes.”

Weinstock treasures that unpredictability. “It’s much more inspiring to be surprised by something you haven’t seen before,” he says.

Reader Responses to Surprised by Light