In spring 2011, Victoria Hunter McKenzie ’81, an artist living in New York City’s East Village, received an alarming piece of mail: a cease-and-desist order from the city’s Metropolitan Transit Authority (MTA) ordering her to quit selling the paintings she had been creating on discarded MetroCards. The irony is that, until the MTA objected to her miniature paintings, she hadn’t sold a single one. 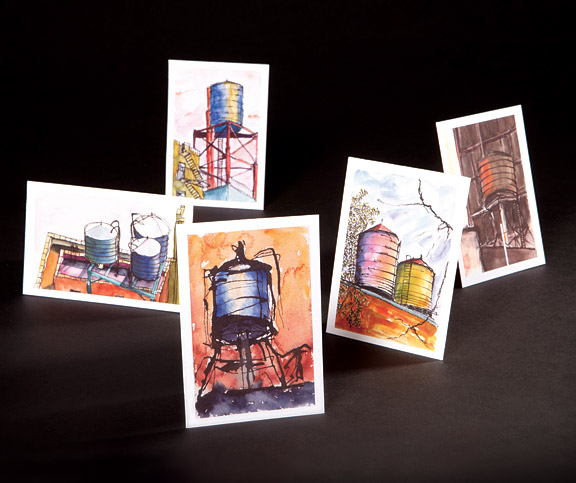 Joel Benjamin
Victoria Hunter McKenzie '81 paints tiny images of New York City icons. Set of five watertower mini prints: $15. For a 10% discount mention BROWN10.
etsy.com/shop/vhmckenzie
McKenzie had started collecting MetroCards the previous winter, coating them with gesso and using oil paints to create iconic images of subways, water towers, and other distinctive city sights. On her Etsy shop and her blog, both named The Night Shift, she had been detailing the process by which she makes the paintings.

What the MTA objected to was McKenzie’s use of its logo. The agency demanded that she pay a licensing fee or stop selling them altogether. Intimidated but unwilling to quit, McKenzie turned to her fellow Etsy vendors for support, and, bolstered by their responses, she described the incident on her blog. Within twenty-four hours, the Gothamist blog and the Village Voice picked up the story. Even the Wall Street Journal declared that the MTA “may not have a strong case.”

Thanks to the publicity around what McKenzie calls “the perfect David and Goliath story,” she sold her entire stock of subway-card paintings in that same twenty-four hours. The MTA knew it had been outfoxed. A marketing manager from the agency told her to “go ahead, turn that lemon into lemonade,” she says, but to please designate them as “subway fare cards” instead of Metro Cards.

On McKenzie’s Etsy store, you can see that fare card paintings are just one of the media she uses. She also creates tiny images of New York water towers, and watercolors ofJamaican beach scenes and tropical bars. Her husband, with whom she has two teenage daughters, is from Jamaica, and McKenzie’s been traveling there for more than twenty years.

“The more I go, the more of a mystery it becomes,” she says. “First-time visitors nestled in an all-inclusive resort may think it is a tropical paradise, but long-timers know that it is significantly more complex.”

A history concentrator at Brown, McKenzie didn’t take studio art until her senior year. However, she says, “I graduated from Brown with the knowledge that whatever path I chose, creating art was going to be a part of it.”

Now a full-time computer-graphics artist and animator for ABC News, she earned an Emmy for Outstanding Individual Achievement in Graphic Design for her work on the first season of PrimeTime Live. After her daughters were born, “I launched my blog as a way to compel myself to draw or paint regularly,” she says. “Much of my work was done after I put my girls to bed, ergo The Night Shift.”