The magical realism of Gabriel Garcia Márquez introduced outsiders to the beauty and violence of Colombia, yet even his fiction cannot fully capture the country’s gorgeous-yet-horrific reality. Blessed with Pacific and Atlantic coastlines, an Amazon jungle, and a trove of oil, gold, and emeralds, Colombia is roiled by Marxist guerrilla groups, military forces, shadowy paramilitaries, and criminal gangs—all of them fighting over land, resources, power, and politics. Max Schoening’s and Brodzinzky’s oral history collection, Throwing Stones at the Moon, reads like a series of thrillers, but the stories are true and almost all the crimes remain unsolved or at least unpunished. 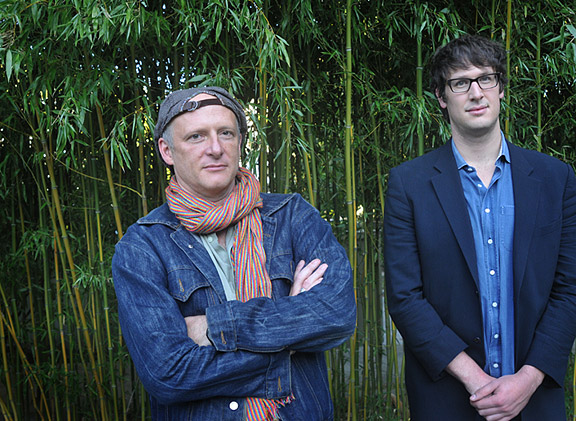 Frank Mullin
Stephen Ferry, left, and Max Schoening on campus in October for an event at the Watson Institute.
A researcher for Human Rights Watch, Schoening ’09 traveled the country to compile histories of well-connected landowners and unknown shanty residents who are among the four million forced to leave their homes because of violence. This is Studs Terkel meets Woodward and Bernstein in the Andes: hard-hitting storytelling about one of the world’s largest displaced populations. (In the two years it took to write the book, 250,000 additional Colombians had to flee their neighborhoods.)

A confession: At first, I didn’t want to read Brodzinzky’s and Schoening’s book. After Brown, I lived with a family in Bogotá, giving myself the junior semester abroad I’d never had. In the 1990s I returned as a journalist to Colombia, which at the time was still reeling from a clash between guerrillas and the military that had left eleven of twenty-five Supreme Court judges dead. I didn’t want to revisit the country’s difficulties.

But Throwing Stones at the Moon should be required reading among Congressional Democrats and Republicans, who have blithely thrown billions of dollars into Colombia’s guerrilla and drug battles. They need to meet Carmen Rodriguez, a single mother of five who moved to a garbage dump to take advantage of a program that gave squatters money for housing. She put a son through college and then avenged the gang that murdered him.

The book also includes the story of Carmenza Gómez, who ferreted out the truth after her son was shot dead by the army, which claimed he was a guerrilla. Another son was pushed off a bridge by the police and left paralyzed. He was ultimately killed for investigating the killing of his brother. A third son, a military veteran, explains that the army executes innocent peasants, calling them guerrillas “in order to win a medal, days off, a higher rank, or a post in another country.”

Violentology, by Stephen Ferry ’83, with research by Schoening, makes a haunting companion to the oral histories. Ferry is a photojournalist in the gritty tradition of James Nachtwey. This oversized book is full of remarkable images of forensic specialists exhuming the bones of a disappeared woman, prisoners of war being released, and paramilitary combatants demobilizing (before taking up arms again). One photo shows a girl, who looks to be about twelve, rushing past the bloodied corpse of a man who has just been assassinated while riding his bicycle.

Then there’s the environmental devastation caused by cocaine producers and their adversaries and by political extremists. Amid eerie scenes of denuded trees and poisoned fields, Ferry notes that 786 bombings of a Colombian oil pipeline over five years spilled ten times more crude oil than the Exxon Valdez disaster.

Ferry’s writing, like his photos, is no-nonsense. In a couple of sentences, he sums up the senseless nature of Colombia’s conflict: “If you sell food to the guerrillas, paramilitaries may show up and kill you. If you refuse to sell food, you may also be killed.”

If members of Congress can’t make time to read books about Colombia, they should at least look at the pictures.