The typewriter has no single inventor, but if it did, one candidate may be Charles Thurber, class of 1827, who in 1843 applied for a patent with the U.S. government for a machine he described as a “substitute for writing, where writing with a pen is inconvenient by reason of incompetency in the performer.” The device, pictured at right, was most likely manufactured at Thurber’s business in Worcester, Massachusetts. Thurber believed it might help the blind, the incompetent performers he described in his patent application. 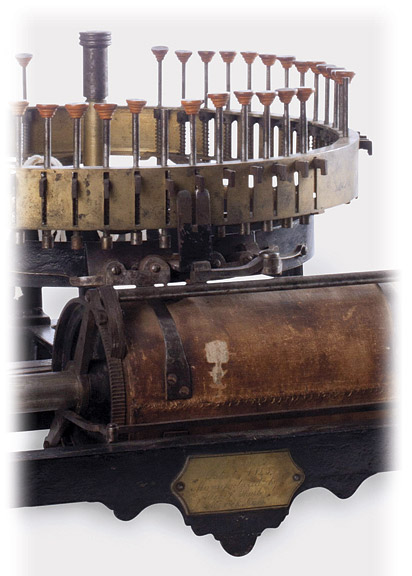 Typewriters evolved from a series of innovators, and Thurber’s contribution was a circular keyboard and a roller mechanism that moved the sheet up and down to allow for proper word spacing. “It is intended for those who wish to keep a legible record of daily events, so that they may be read with ease and dispatch by others,” Thurber wrote. “The various useful purposes to which it may be applied will readily suggest themselves to everyone.”

Born in 1803, Thurber, who eventually became a Brown trustee, worked as a teacher after graduation, then started a pistol factory with his brother-in-law, Ethan Allen (not the patriot and furniture maker). His typewriter, found in the basement of his home after he died, was obtained by the Remington Company, which sent it on a promotional tour around the country. It is now housed at the Worcester Historical Museum.

Reader Responses to Before Keyboards