Back to the Philippines

When Ericson Perez was asked about his Filipino heritage at Brown, he would often struggle to answer. Born in the Philippines, he’d come to the United States with his family in 1982 and grown more and more assimilated. When answering Brown students’ questions, “I would talk about the food,” Perez says. “It was pretty pathetic.” 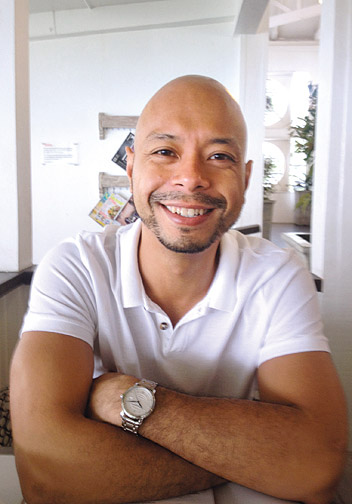 Courtesy Erikson Perez
All that changed in 2005, when Perez took a vacation in the Philippines. To his surprise, he felt an immediate and instinctive connection to the land and its people. “In the United States, I was always the Filipino, not Ericson,” he says. In the Philippines, “I don’t have to explain that I’m different. It’s hard to describe in words, but it just feels like it’s home.”

In the fall, Perez, a biology concentrator, brought many of the lessons he’d learned in the United States to his native country when he opened the One World School in Manila. After graduating from Brown, he’d taught at a public middle school in Connecticut where students struggled with basic reading and writing skills and often misbehaved. “My first year as a teacher was the most horrific year of my life,” Perez says. “I would go home every day thinking about how I was failing this or that kid.”

At the One World School, Perez developed an innovative approach to educating children with special needs, an approach unusual in the Philippines. Kids with special needs usually represent a small minority of students in large classes. One World has smaller classes—from two to eight kids compared to a minimum of twenty in public schools—in which the majority of students have special needs. They include everything from students with Down syndrome or autism to “twice exceptional” children, who are gifted and talented but also have a learning disability or other special education needs.

Perez decided early on that he also wanted to include an educational program for adults with special needs. Their classes teach the skills needed for workplace success and for interning as assistant teachers. These adults might have languished at home, Perez says, because colleges in the Philippines often don’t cater to special-needs students. “College was not the right fit for them,” he says.

One World also offers occupational and speech therapy onsite, in contrast to most other public and private schools, where students must travel elsewhere to receive the same services. “Children with special needs spend a lot of time feeling lonely and isolated,” Perez says. Having experienced discrimination in the United States, he says, “I know what it feels like to live on the margins.”

One World School currently has twenty-eight students, from pre-kindergarten kids to adults. Tuition runs from $5,000 to $10,000 a year, though financial aid is available. The majority of students are Filipino, but some come from the United States, Europe, and Asia. In the immediate future, Perez plans to grow the student body and raise more money for financial aid. He says other Filipinos are often puzzled by his long-term commitment to staying there and running the school.

“When people find out I used to live in the States, they say, ‘Are you crazy?’ Most people here are trying to find a way to get there,” Perez says. His response: “I like living in a place where everyone looks like me.”

Reader Responses to Back to the Philippines