Off to Ann Arbor

Provost Mark Schlissel, who came to Brown in 2011, is decamping for Ann Arbor to become the fourteenth president of the University of Michigan. The job makes him one of the most prominent university presidents in the country, as well as head of an institution whose 28,000 undergraduate students make it four and half times larger than Brown, whose student body totals 6,200. Michigan’s nearly $9 billion endowment is about three times Brown’s and supports graduate schools in business, education, engineering, law, medicine, public health, and nursing. 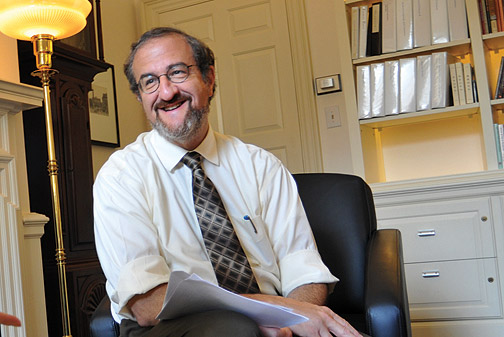 Before his arrival at Brown in 2011, however, he spent twelve years at UC Berkeley, three of them as dean of its biological sciences department, so working at a large public institution will not be new. Hired by former President Ruth Simmons, Schlissel has worked closely with her successor, Christina Paxson, on developing the University’s new ten-year strategic plan, which calls for increasing financial aid to students, fostering more interdisciplinary approaches to the world’s problems, and expanding the campus into Providence’s Jewelry District. Schlissel says Brown’s biggest challenge in the years ahead will be fulfilling the bold ambitions of the plan. “Every day, opportunities come along, and you have to test them against the plan,” he says. It’s critical to “maintain discipline and focus.”

At Brown, Schlissel also oversaw the founding of a stand-alone school of public health, which was previously part of the medical school, and the growth of the University’s Institute for Brain Science. And he has been especially outspoken on the issue of rising tuition rates at colleges and universities.

At Brown, he says, “we’ve tried to increase the tuition at the minimum rate possible.” The average tuition for a student on financial aid at Brown has actually gone down over the last several years, as the University has continued its commitment to need-blind admissions.

Schlissel says that one thing he will miss witnessing at Brown is the growth of the Watson Institute for International Studies. “The Watson Institute has really struggled with multiple directors and finding its way,” he says. But in 2012 Watson brought in a new director, political scientist Richard Locke, who has since hired five new faculty members and started a new postdoctoral program. “It’s now on a spectacular trajectory,” Schlissel says.

As for the University of Michigan, it has seen a decline of more than 50 percent in state funding over the last decade, part of a nationwide trend at public universities, where cutbacks in government subsidies have forced steep budget cuts and tuition hikes.

“As the economy improves, states need to reinvest in public education,” Schlissel insists. “I hope that politically we can organize ourselves so that, as the economy goes back into an upcycle, citizens and, really, our leaders realize that education is the way to transform lives.”

Schlissel begins his new job on July 1. He says that, among several other pluses of living in Ann Arbor, he looks forward to attending sports events at a university whose basketball and football teams rank among the best in the country. “I’ll be seeing what it’s like to be in a place where 100,000 people go to a football game on a Saturday and 20,000 people go to a basketball arena on a Sunday afternoon,” he says. “It binds together the culture out there.”

Reader Responses to Off to Ann Arbor