They met in 2006 while trying out for a Disney movie. Eight years later, Charlie Enright ’08 and Mark Towill ’11 are sailing around the world together, competing in the grueling 38,739-nautical-mile Volvo Ocean Race. 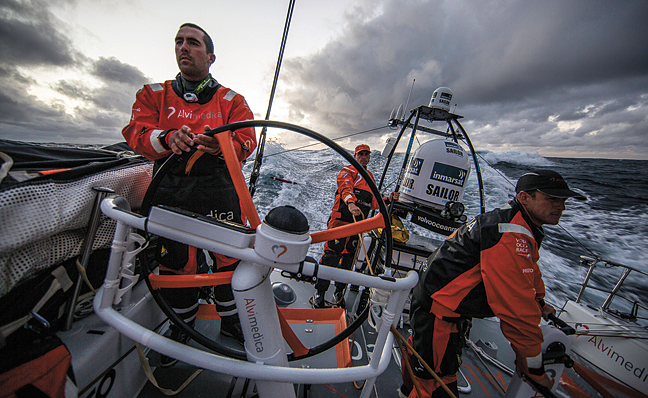 Armory Ross/Team Alvimedica
Mark Towill, at left, steers Team Alvimedica southeast away from Abu Dhabi during the second leg of the Volvo Ocean Race.
Their circumnavigation of the globe began in October in Alicante, Spain, and includes nine legs over nine months, ending in June in Gothenburg, Sweden. Enright and Towill are part of Team Alvimedica, one of seven teams competing in the race.

In 2006, while Towill was still in high school and Enright was at Brown, the pair tried out and were eventually selected for the film Morning Light, about a group of teenagers who compete in the TransPac ocean race, which runs from California to Hawaii.

“We quickly became fast friends,” Towill recalls. “It was interesting because he was the oldest guy on Morning Light and I was the youngest, but we were the closest of anybody.”

The coaches for Morning Light included several men who had just competed in the 2005−06 Volvo Ocean Race, including skipper Mike Sanderson and navigator Stan Honey of the yacht ABN AMRO I, which won the Volvo that year. “It was like learning how to play golf from Tiger Woods,” Towill says.

For six months Towill and Enright heard stories about the Volvo Ocean Race. “From then on, it became a dream of mine,” Towill says. “Then it was a goal. Now it is reality.”

Sailing was not the only topic the two discussed during filming. Towill is from Hawaii, and when Enright described Brown, with its strong sailing team and its open curriculum, Towill eventually decided to apply. “The open curriculum was the difference maker” in his choice of Brown over Stanford, Towill says, “and the opportunity to be the engineer of your own education.”

At Brown, Enright was a four-time All-American, and Towill finished third at Nationals as a senior. “They were two of the greatest kids I have ever coached,” says John Mollicone, Brown’s sailing coach since 1999. “If they had a goal they wanted to achieve in sailing, they were able to do it.”

After college, both Enright and Towill raced offshore more frequently, logging thousands of miles, gaining valuable experience, and achieving impressive results. Enright and Towill won the Newport-Bermuda Race in 2010. After assembling the Oakcliff All-American Offshore Team, they won the Transatlantic and Rolex Fastnet Races in 2011.

“That was a big success and the stepping stone for what we are doing now,” Towill says.

Their 2011 Transatlantic campaign caught the attention of the Volvo race organizers, who invited them to the start of the last race in 2011. “We were able to sit down and meet with the CEO of the Volvo race,” Towill says, “and they put us into the business development program. We talked to them about what it would take to find sponsorship for the race.”

In the past, putting together a campaign might cost as much as $70 million, since each team also had to design the boat. However, for the 2014−15 race, organizers chose one design for all entries, the new Volvo Ocean 65. The result lowered an important economic hurdle for joining the race, because without the need for boat builders and designers, a team needed to raise only $20 million. Still, raising $20 million is not easy. “In some ways,” Towill says, “it was probably harder than doing the actual race.”

It took them two and a half years to find their sponsor: the Turkish medical devices company Alvimedica. “As it turned out, we had a tremendous amount in common,” Enright says, “and we were able to put the deal together very quickly.” Alvimedica executives were already familiar with the race and were looking to sponsor a team. And, because the company was founded only in 2007, they were looking for a young team.

The way to the race for Enright and Towill was a bit unusual. Younger sailors usually join an established team and learn the actual and metaphorical ropes. However, in true Brunonian fashion, Enright and Towill decided to follow a more independent path by creating their own team and raising the money themselves.

Team Alvimedica is the only American entry in the race, and it is the youngest team. The rules require each team to have two members under thirty, but, except for forty-nine-year-old navigator Will Oxley, every member of Team Alvimedica is thirty-two or younger. “We’re trying to be the best sponges we can possibly be,” Enright says. “We are trying to use the early legs to close the experience gap that does exist and to make ourselves a more consistent team as the race goes on.”

During the race the team deals with fatigue, hunger, sleep deprivation, and extreme weather. To succeed at this level, sailors need to be physically strong, mentally tough, and according to Enright, “a little nuts.”

The first leg, which ended in November, took Team Alvimedica twenty-six and a half days to complete the 6,487 nautical miles from Alicante, Spain, to Cape Town, South Africa, good enough for a fifth-place finish. Enright believes that, although the team has come together quickly, it has not yet reached its full potential. The key to success over the course of the entire race will be how quickly the team learns and then stays consistent over the marathon nine months.

“It has definitely been a dream of ours,” Enright says, “and we’re going to keep working at it and hopefully this is just the beginning.”