Getting more low-income students access to college is a popular cause these days. But what happens to them once they are there? Who helps low-income kids adjust to and thrive in what is a largely upper-middle-class college life? 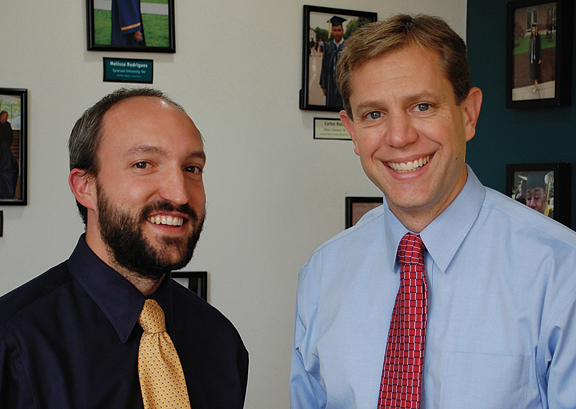 The Boston-based nonprofit Bottom Line does. Formed in 1997 with the philosophy that at-risk city kids need a guide and mentor both to apply to college and to make it through to getting a degree, Bottom Line provides as many as six years of help, doing whatever students need, even sending them care packages or supporting them through the death of a parent. Nationwide only 11 percent of poor first-generation college students graduate within six years. For the 4,000 students connected to Bottom Line, it’s 78 percent.

“So many students fall off after they’ve made the decision” to attend college, says Bottom Line’s CEO Greg Johnson ’94. “But what good is college access without success?”

Johnson, a political science concentrator, joined Bottom Line in 2003. After graduating from Brown, he taught SAT prep classes for Princeton Review and eventually became its Northeast marketing director. That's how he learned about Bottom Line. “There were a lot of college access programs,” he says, “but the difference I immediately noticed about Bottom Line was that the definition of success was getting a college degree,” not just getting into college.

Mike Wasserman ’06, the Massachusetts executive director of Bottom Line, joined right after graduating from Brown. A public policy concentrator, he spent much of his spare time as an undergrad working with young people, whether by coaching Providence high school debaters, chaperoning little kids as they went trick-or-treating in dangerous neighborhoods, or tutoring elementary school students.

“I was looking for someplace that would give me some sort of leadership role,” Wasserman says. “Bottom Line was small enough that they were willing to take a chance on me.”
Bottom Line operates on an annual budget of $7 million, all of which comes from private donors. It operates in New York City as well as Boston and Worcester, Massachusetts, and it is planning to expand soon to Chicago. The organization accepts candidates as high school seniors and arranges one-on-one sessions with counselors who help them select a school, fine-tune their entrance essays, and review complicated financial aid applications.

Sometimes counselors must discourage students from enrolling at dream schools because they can’t afford them and shouldn’t be saddled with ruinous debt. “We try to put all the cards on the table so they know what they’re getting into,” Johnson says. “Poor financial choices will lead to withdrawal or transfer, so we try to head off those things.”

Once they’re in college, Bottom Line’s undergrads get monthly on-campus visits from so-called Success Counselors, who discuss course selection and majors as well as the general challenges of transitioning to college life. The group also sends popular and morale-boosting care packages, which contain snacks, coffee mugs, supplies, and other goodies, all of which serve as a reminder to students that someone’s thinking about them.

Growing up, Wasserman says, “they’re not around people who’ve been to college. When they hit an obstacle at a very large school, they have no relatives who can tell them how to deal with it. That’s where you lose students.”

In recent years the organization started helping students compete for jobs once they graduate. During campus visits, counselors urge students to seek out internships, and they offer tips on writing résumés and cover letters. “The employability piece is getting more and more complicated,” Johnson says. He sees students graduating, “but they still don’t have the skills they need.” Still, eight out of ten Bottom Line college graduates are employed or attending grad school within three months of leaving college.

Every year, Bottom Line hosts a Recognition Night ceremony for college graduates. High above Boston, on the thirty-sixth-floor of a skyscraper in the financial district, each new alumnus has a chance to address the audience of friends, family, and Bottom Line staff about the importance of the college experience.

Reader Responses to Getting Through College