Speaking at a Commencement forum over Memorial Day Weekend at the Perry and Marty Granoff Center for the Creative Arts, honorary degree recipient Umberto Crenca told the story behind the 1985 publication of his “New Challenge Art Manifesto,” which eventually led to the creation of AS220, a Providence artist-run organization that provides space for local artists and an unjuried and uncensored forum for the arts. 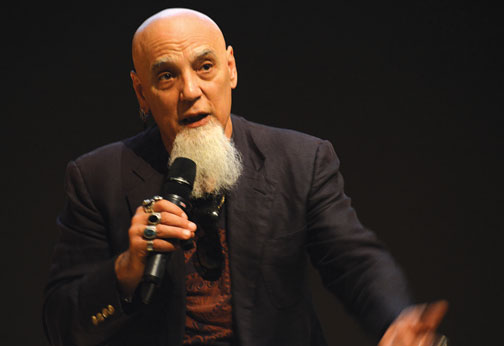 Crenca had been aware of the need for such a nonjudgmental artists’ community at least as far back as 1983, when the Providence Journal gave his first art show a scathing review. Another artist then wrote an op-ed criticizing the review and thus brought the Providence arts community together for Crenca’s next show. This was the impetus behind the publication of the “New Challenge Art Manifesto.”

Next Crenca established AS220. The organization squatted in an abandoned and unheated building in downtown Providence. Given these humble beginnings, Crenca said, it was a major miracle that AS220 has become a nonprofit that serves more than 1,000 artists and (legally!) occupies three buildings in Providence. Crenca quipped that if, twenty years ago, he’d said Providence would be called the creative capital, he would have been locked up.

Today Crenca wants to assist other cities in making their urban centers inviting, by teaching them the right way to do so, using AS220 as a model.  For Crenca, reviving art in the inner city should not simply be a road to gentrification but rather a way to make art accessible to all and a positive force for community development. At the forum, Crenca outlined a three-tiered process for achieving this. A community must create, first, a physical space where artists live and create, then a virtual space to empower artists to share their work independently, and finally a conceptual space to change an entire community’s conception of itself and what it deserves.

At the end of the forum, a Brown 2014 graduate approached Crenca and asked if he could help him open an art space like AS220 in Washington, D.C. Crenca gave him a card and told him they should work together.