Weekends with Yankee, hosted by Richard Wiese ’81, premiering in April on PBS

Richard Wiese ’81 went on his first adventure in 1971, when he climbed Mt. Kilimanjaro at age eleven. That was a typical journey for Wiese growing up: after all, his dad, a Pan Am pilot, was the first person to fly solo across the Pacific. “For me, it wasn’t so strange,” Wiese says. “My father would say, ‘Come on, I’m going this weekend to West Africa, do you want to come with me?’” 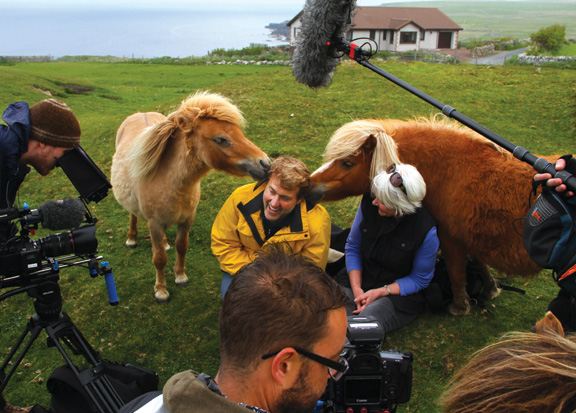 Richard Wiese on the road in Scotland's Shetland Islands for his PBS show Born To Explore, which has been airing since 2011.

That globe-trotting childhood sparked a lifelong wanderlust, as well as the decision to forge a career as an explorer, TV host, and author. Over the years, Wiese has tagged jaguars in the Yucatan jungle, cross-country skied to the North Pole, and trekked up a lava-spewing volcano in Tanzania. A best-selling guidebook, Born to Explore, led to an Emmy Award–winning travel program of the same name that recently moved to PBS after five seasons on ABC. “Ultimately, it’s not about the destination,” he says. “It’s about the people you meet along the way.”

Now Wiese, who lives in Connecticut, is exploring  closer to home. His new PBS series, Weekends with Yankee, which is slated to premiere in April, gives an explorer’s look at New England, from signature events such as the annual WaterFire installation in downtown Providence to such hidden spots as the Vermont house where Rudyard Kipling wrote The Jungle Book.

A Long Island native, Wiese studied geology at Brown with thoughts of eventually becoming a doctor. But during his sophomore year, a scout for Mademoiselle approached him about appearing in the magazine. That led to work as a Ford model and a stint as an actor, with small parts in such movies as 1981’s Endless Love. He then moved to broadcasting, using his passion for travel to land gigs hosting adventure shows on FOX, the BBC, and the Discovery Channel.

In 2002, Wiese became the youngest president ever of the Explorers Club, a century-old society that promotes scientific exploration of land, sea, air, and space. During his four years in office, he was a member of the largest medical expedition ever sent to Mt. Everest. To his delight, the post allowed him to spend time with two of his heroes, Sir Edmund Hillary and Buzz Aldrin. “It was just super cool—there’s no other way to say it,” he laughs.

These days, even while taping dual shows for PBS, Wiese plans to keep exploring. After all, he says, he’s never been to Greenland, or Greece, or sailed through the South Pacific. And he intends to scale Kilimanjaro again in 2021, marking the fiftieth anniversary of his original climb. “Honestly,” he says, “it’s as much of a thrill planning a trip now as it’s ever been.”

Reader Responses to The Explorer