As any fan of Mad Men knows, America changed radically in the seismic period between 1964 and 1968—which were exactly the years when Ken Galdston ’68 attended Brown. Activism didn’t mean much to him during freshman year, Galdston remembers: “There was a peace activist with a beard,” he says, “who’d do a silent vigil against nuclear war under the flagpole every day, which was pretty unusual.” But by his senior year, he says, “people had gotten politicized, and even fraternity brothers had begun to think twice about Vietnam, because they were facing the draft.” 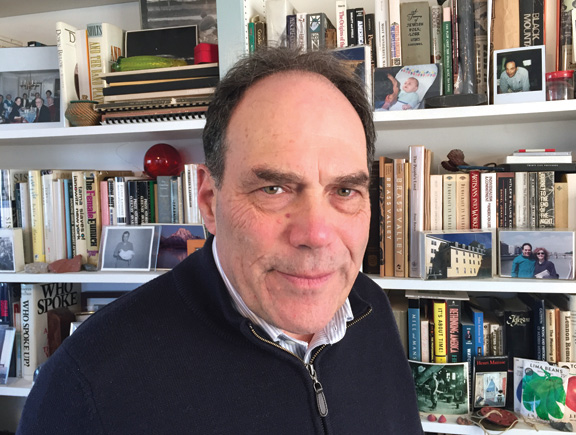 That’s when Galdston, who grew up in Queens and Great Neck, Long Island, and who now lives in Newton, Massachusetts, got caught up in the spirit of the times. His honors thesis focused on the path-breaking community organizer Saul Alinsky, and he helped Brown students work alongside Providence locals on antipoverty programs. “The assumption then,” he recalls, “was that the government was not paralyzed, so there was both anger and hope.”

What’s followed has been an extraordinary life of on-the-ground community activism in cities throughout the United States, starting with the pre-AmeriCORPS program VISTA in the 1960s in North Carolina and then later working directly with Alinsky. “His view of organizing was sacred and artistic,” Galdston says. “You had to immerse yourself in it and honor the community.”

Galdston’s work took him from inner-city black churches to rural grange halls as he helped locals create cooperative housing or organize buyouts of industries poised to close. After earning his MBA at Yale in the early 1980s, he formed the Naugatuck Valley Project in Connecticut, which worked with churches, unions, and even chambers of commerce to create such things as a worker-owned home health-care company and a worker buyout of Bridgeport Brass, which for eight years was the largest democratically controlled firm in the country. “It allowed many people to retire with benefits they wouldn’t have had,” he says.

Eventually, the Naugatuck Project evolved into the Intervalley Project (IVP), a network of groups throughout New England for which Galdston, now 70, has been lead organizer for the past 20 years. One of its key projects these days, Aging with Dignity/Working with Dignity, fights for improved wages and conditions for home health-care workers, many of whom are immigrants.

“The quality of care is critically dependent on the quality of the jobs,” Galdston explains, “which currently have rock-bottom pay, no benefits, little or no training, and little opportunity for growth or advancement. This all leads to a 50 percent annual turnover, which is disruptive for both patients and workers.” In Connecticut, Galdston’s group worked with the Catholic Church to persuade the general assembly to pass the first domestic-worker bill of rights to protect health aides from sexual harassment and other challenges. The same coalition is also pushing the state to provide special training for workers who care for people with chronic conditions.

Meanwhile, in the Merrimack Valley of northeastern Massachusetts, IVP played a role in helping pass statewide legislation prohibiting temp agencies from charging workers—again, many of them immigrants—for transportation to and from worksites. “They were required to take the company van to a job; they couldn’t just drive there,” Galdston says. “It was a company-store type of practice.” Working through churches, Galdston says, “we would get retired businessmen to tell legislators, ‘If your company has to do things like this, you shouldn’t be in business.’ That’s the power of building broad coalitions.”

Galdston keeps up a rigorous schedule. On a typical week late last year, he was in Connecticut on a Tuesday pushing a for-profit hospital to offer more worker training; Wednesday he worked on grant proposals for IVP’s member groups; and the rest of the week he was in rural Vermont organizing a new member organization. Back home, he spends time with his wife, Janet Saglio, the senior financial adviser for the Boston Collegiate Charter School, and their son, Daniel, 22, who works in the food industry.

Galdston also teaches a class in organizing at Tufts and, along with a group that includes classmates Jim Dickson, Bob Cohen, and Jane Beckett, built a community organizing archive at Brown. It currently includes videotaped interviews with 100 diverse organizers nationwide, some of them Brown alumni. Some of the tapes have already been used in political science classes. (Galdston urges alums with material relevant to the archive to contact University Archivist Jennifer Betts at jennifer_betts@brown.edu or him at intervalleyproject@gmail.com).

Galdston just went part-time on January 1, transitioning to the role of strategic adviser. Eventually, he plans to turn IVP over to someone else (in part, so he can pursue his new love, photography). But he’s not likely to fully abandon activism anytime soon.

“I’m Jewish,” he says, “and all four of my grandparents fled persecution. My mother taught me to build community, to not just stay with your own kind. And both my parents had a sense of speaking and standing up for people who get the short end of things. If you’re outraged by what you read in the papers, then do something about it.”

Reader Responses to See Something, Do Something