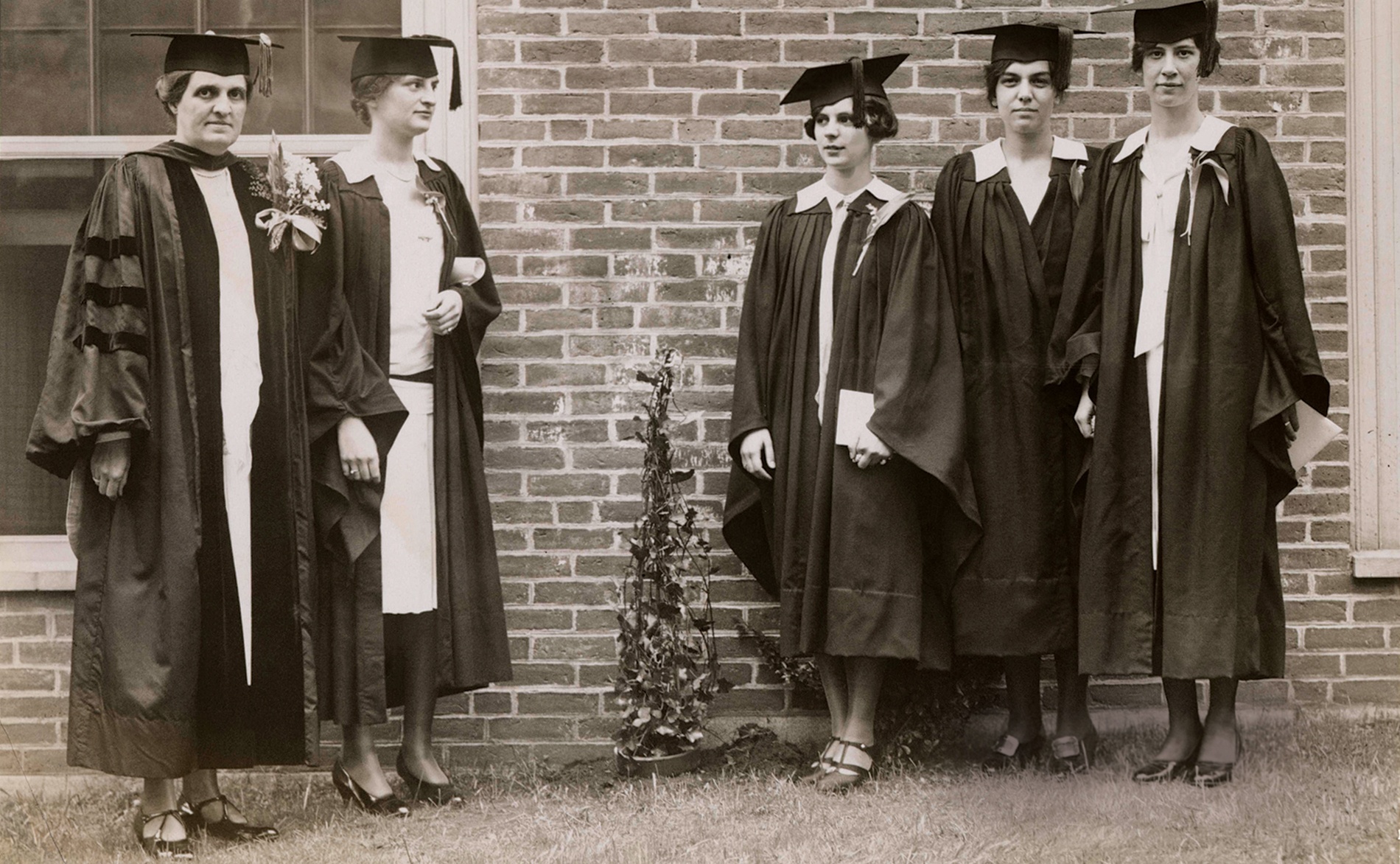 At Ivy Day in June 1928, Dean Morriss, at left, posed with members of the graduating class.Brown Archives
Ever True

A Place of Their Own
One of only five women to earn PhDs at Bryn Mawr in 1911, legendary Pembroke dean Margaret Morriss spent her life fighting for women to have the same opportunities as men. Her niece knew her simply as Aunt Peg.

I was on the Pembroke campus some time ago, celebrating my 50th reunion, when I stepped into the Crystal Room of Alumnae Hall. In the long-ago days of “gracious living,” this room was a setting for teas and receptions, a place where students gathered under the crystal chandelier and the watchful eyes of former deans whose portraits line the walls. On that night, the elegant room had become a staging area for caterers and photographers, its floor festooned with cables and wires. As I stood looking up at one of the portraits, a student waitress glanced up and asked, “Who is she?” 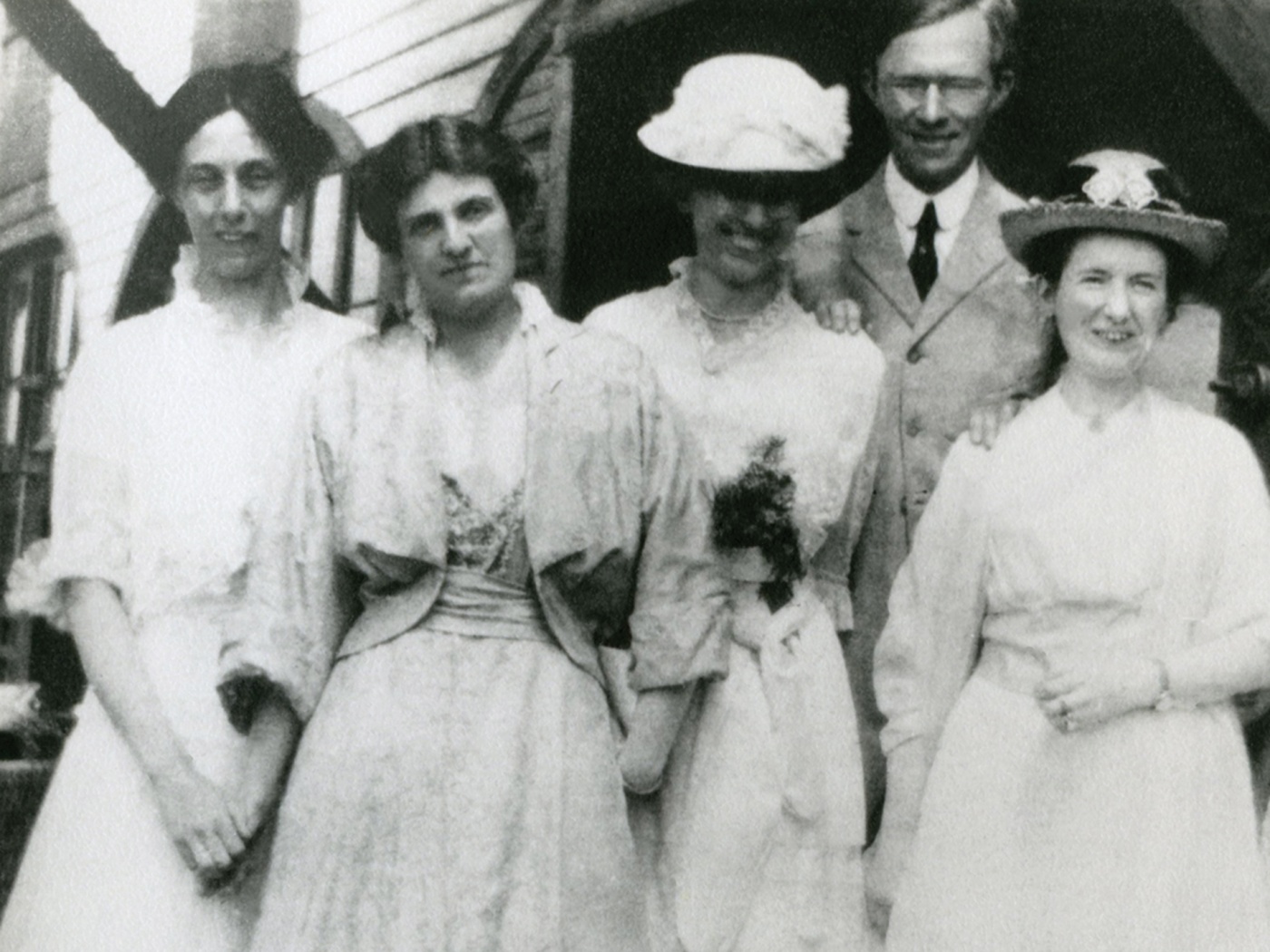 “That’s Margaret Morriss,” I said. “She was dean of Pembroke College.” I could also have said, “That’s my Aunt Peg.”

Margaret S. Morriss, my father’s older sister, was born in Baltimore in 1884 and died in Providence in 1975. She was a fierce advocate for women. She earned a PhD in history, one of five women to get a doctorate from Bryn Mawr in 1911. Following her graduation, she spent a year at the London School of Economics and returned to teach history at Mount Holyoke until World War I interrupted her teaching career. She went to France with the American Red Cross to organize suitable places for Army nurses and female members of the Signal Corps to spend off-duty hours. She had found the purpose that drove her career—offering women a place of their own, equal facilities, in a man’s world. 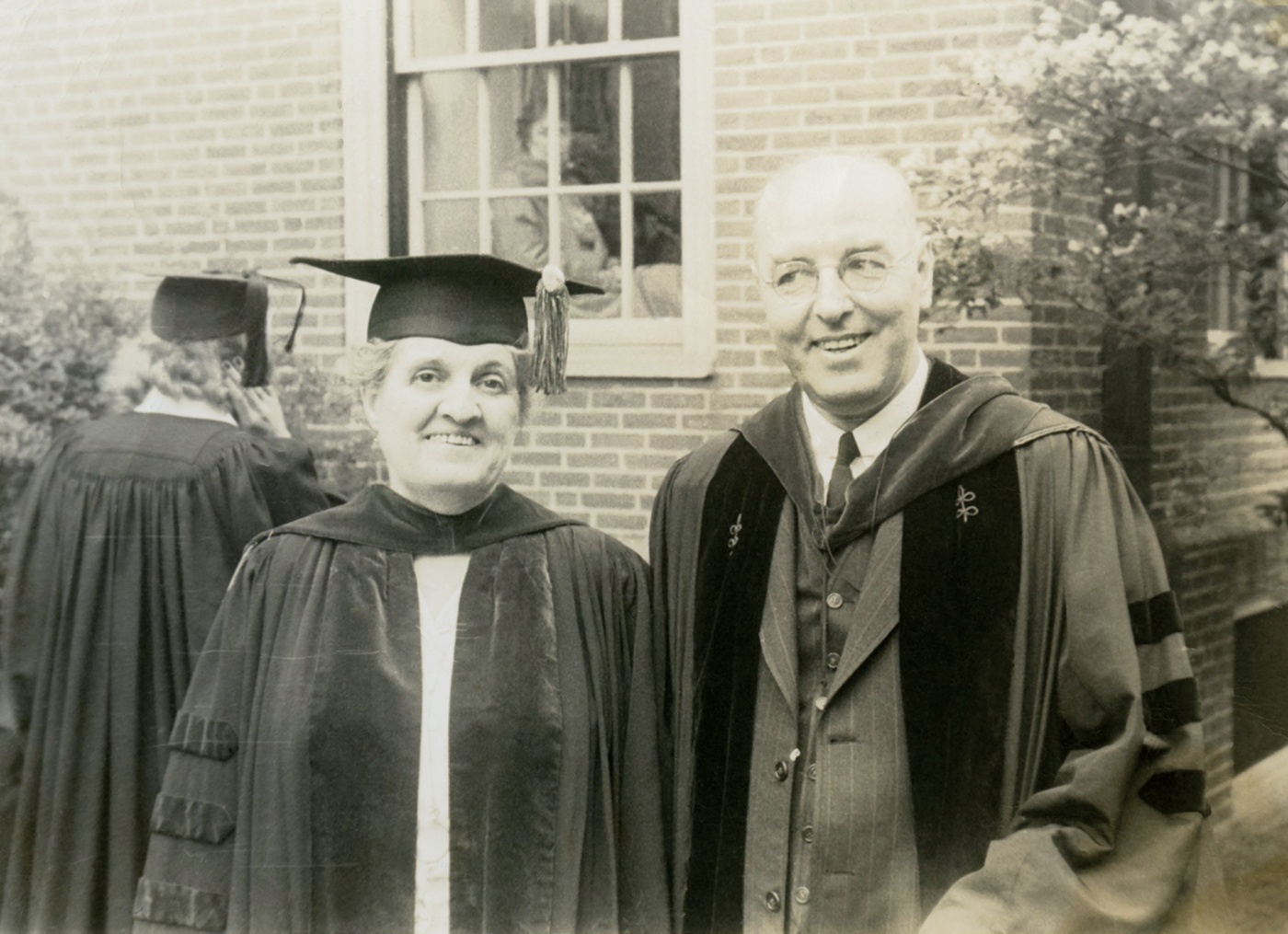 Which is what she did at Brown. She arrived as a history professor and dean of women in 1923, when there were only 350 women enrolled, most of them local. By the time she was done, enrollment had increased to 880, and students were from 30 states and five foreign countries. She oversaw the construction of Alumnae Hall and the new Andrews dormitory, which was considered the last word in dormitory elegance for its time. She believed that the Pembroke College she’d helped build offered the best of two worlds to its students: the cohesion and intimacy of a small women’s college and the broad educational opportunities of a fine university.

She retired as the dean of Pembroke College in 1950. During her years there, her determination to move her ideas forward earned her the nickname “Peggy Push,” a play on her middle name, which was Shove. She became known nationally and internationally as the president of the American Association of University Women. She served on The American Council of Education and as a consultant to the Secretary of War under Franklin Roosevelt. 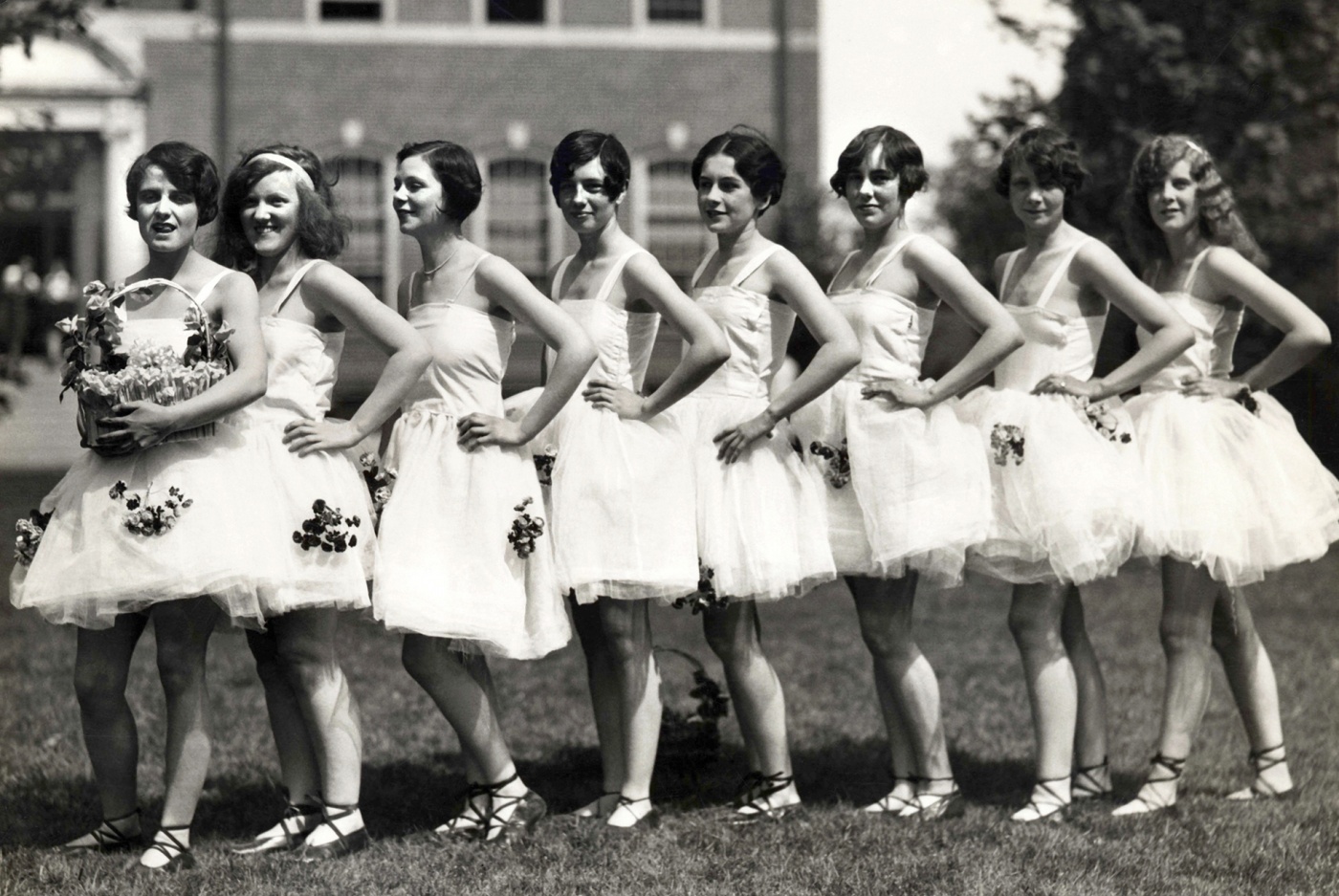 And I knew her as my Aunt Peg. Her visits to our home in Wallingford, Connecticut, always changed the atmosphere. She had an assertive way of expressing herself and stating her opinions, which contrasted with my father’s quiet manner and my mother’s natural reserve. When Peg visited, there were drinks before dinner. She and my parents stayed much later than usual at the dinner table, the smoke from their cigarettes drifting about their heads as she expounded on her ideas or argued politics with my father. She was an ardent supporter of FDR, but her brother voted Republican. 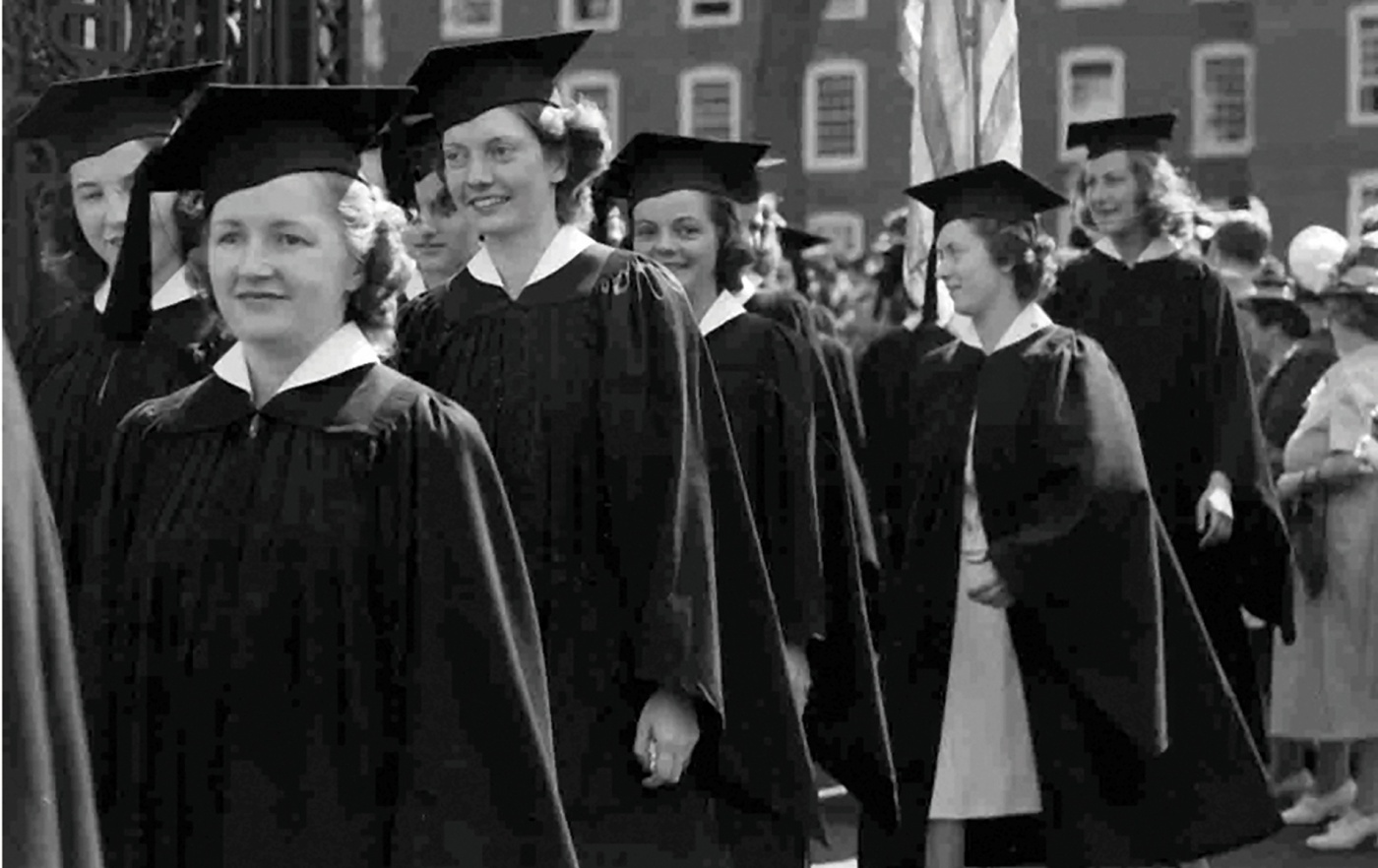 Peg lived in a tall Victorian house at 189 Bowen Street in Providence. The downstairs rooms were dark and formal, but she had a sunny sitting room at the end of the upstairs hall where, on her broad desk, she kept a collection of small ivory elephants. At the age of five or six, I found the house with its large dark furnishings intimidating, but those elephants fit perfectly into my small hands.

In March of 1956, Peg was hospitalized for colon cancer surgery. When I saw her, I was shocked at how small she looked in her hospital bed. With no teeth in her mouth, and her white hair unkempt, she didn’t look like anyone I knew. Peg made a full recovery, but I had seen her vulnerability.

In the years after Pembroke, while I was busy with graduate school, marriage, and babies, Aunt Peg became more frail. When she could no longer drive or get her own meals, she gave up her apartment and moved into two rooms at the Minden Hotel on Waterman Street. Her body was failing, but her mind stayed sharp. She read the newspaper every day, did the crossword puzzles, and read her favorite Agatha Christie mysteries. Then her physical condition worsened, and it was clear that she had to leave the Minden.

Morriss relaxing with a friend, Ellen Fernon, in 1938. Brown archives

I told her about the possibility of a better room. She said that was nice, but she wouldn’t need it.

“I won’t be here long,” she announced, and then she offered me a piece of advice. “It’s best to cash in your chips around 80,” she said. “You don’t want to outlive all your friends.” She died a few days later.

Betsy Morriss Campbell hopes that “Peg will be remembered even though Pembroke College is long gone.”

Reader Responses to A Place of Their Own