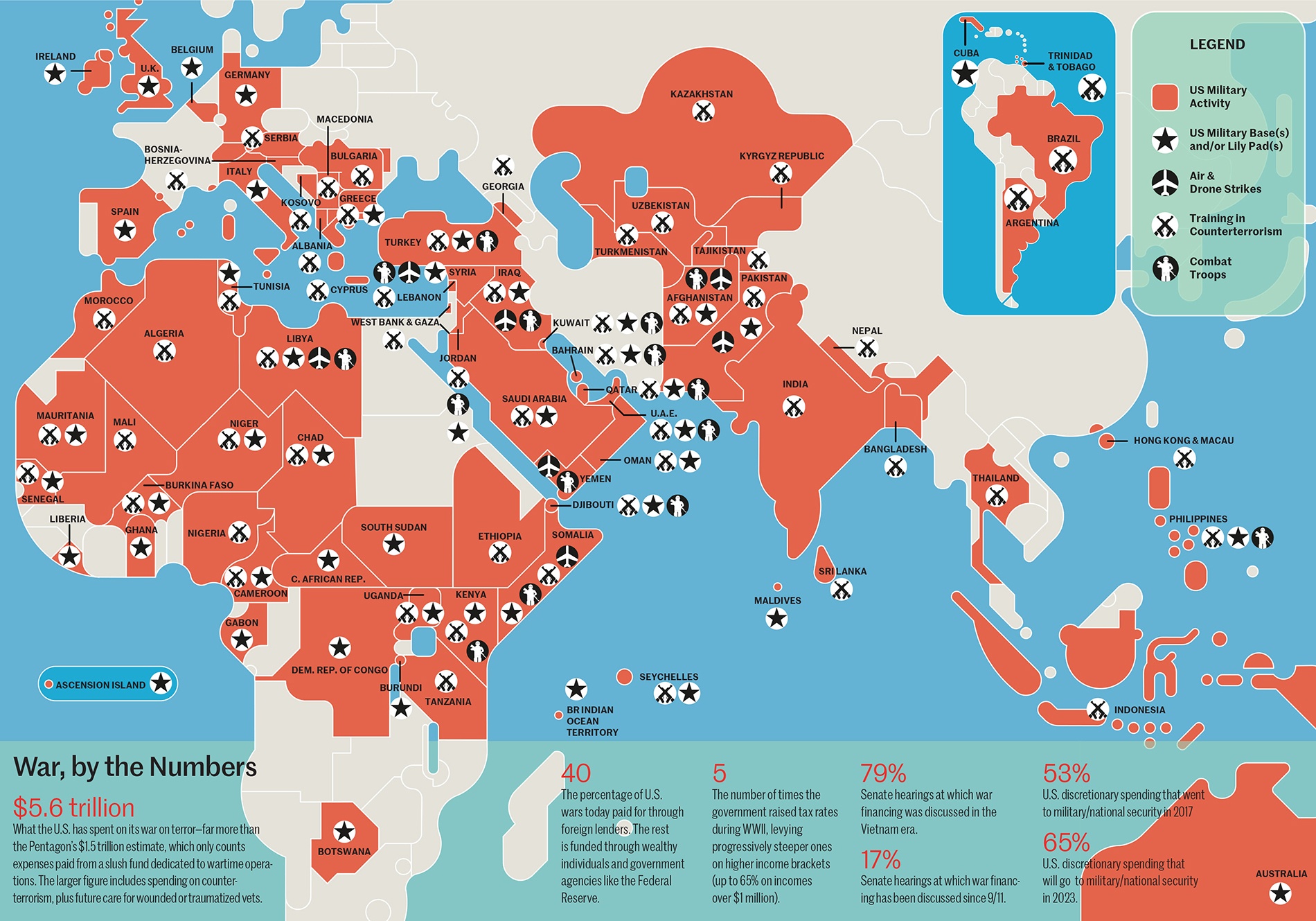 The Price of U.S. Global Policing
Brown researchers did the math.

“People have no idea how many places in the world we are militarily engaged or how much this endless global war is costing us.” So says Stephanie Savell PhD ’17, co-director of the Costs of War Project at Brown’s Watson Institute for International and Public Affairs. Since 2011, the team of 35 scholars, legal experts, human rights experts, and doctors has harvested and merged research and data from multiple sources to quantify what the United States’s military engagement worldwide since 9/11 is actually costing the nation.

The U.S. is projected to owe more than this in interest alone on war debt by the 2050s. (From Watson scholar Ryan Edwards’s “Post-9/11 War Spending, Debt, and the Macroeconomy.”)

The project estimates that price tag at $5.6 trillion, which dwarfs the Pentagon’s $1.5 trillion estimate. “Most people just think we’re talking about Iraq, Afghanistan, and Syria. They have no idea we’re talking about military action against terrorism in 76 countries, or 40 percent of the world,” says Savell. “We’re also looking at what this is going to cost us in terms of caring for all post-9/11 vets. We’re going to be paying for these wars for decades.” The group’s research shows that WWI and II financing strategies such as savings bonds and raising taxes on the rich mitigated income inequality, while current strategies—such as borrowing from elites while simultaneously cutting taxes—tend to widen the income divide.

What’s worse, says Savell, is that few citizens are tapped into this looming economic crisis. “Americans are so detached from the fact that we’re even at war at all. The situation will only change if people start caring on a larger scale in terms of whom they’re electing and holding accountable.” Learn more at brown.edu/costsofwar.

Reader Responses to The Price of U.S. Global Policing

I can’t thank Brown University enough for being host to the Costs of War Project (“The Price of U.S. Global Policing,” The Big Issue, November/December 2018). Though not a veteran (except of the Peace Movement), I do most of my ongoing peace-related activism through my local chapter of Veterans For Peace in Sonoma County, California. Our chapter has developed a program called The Costs of Perpetual War, which we present at local high schools and Sonoma State University. We may soon be presenting at a local junior high school. For two years, every junior at Santa Rosa High School has attended our presentation. The presentation includes personal memories of local veterans, information on moral injury, sexual assault and degradation of the environment, all interspersed with short video clips which illustrate the topics. We also delve into Mark Twain’s “War Prayer.” Though our members are registered as Democrats, Greens and Decline to State (no Republicans have joined us), we are nonpartisan and make it clear that perpetual war is waged no matter who is president. Having Brown’s Costs of War Project as a resource has been invaluable and we use one of the videos produced by the Project. I will be at Brown in May for my 50th reunion and hope I will have the opportunity to thank some of those involved in the project in person.

The Watson Institute’s estimate of $5.6 trillion as the price tag for U.S. military engagement since 9/11 (“The Price of U.S. Global Policing,” The Big Issue, Under the Elms, Nov/Dec 2018) contrasts with a Pentagon estimate of $1.5 trillion. It should surprise no one that a tally of costs will vary immensely depending upon how you define costs and effects. In the words of British economist Ronald Harry Coase, “If you torture the data long enough it will confess to anything.” It is indisputably a lot of money. The institute’s project co-director Ms. Savell evidently believes that if Americans had a better grasp of the cost, they would be more inclined to elect politicians who would avoid military engagements. Has she considered the possibility that the majority of Americans believe that a strong military is essential to keeping the country safe, that the military is there to deter wars as well as to fight them, and that they understand that it’s expensive?