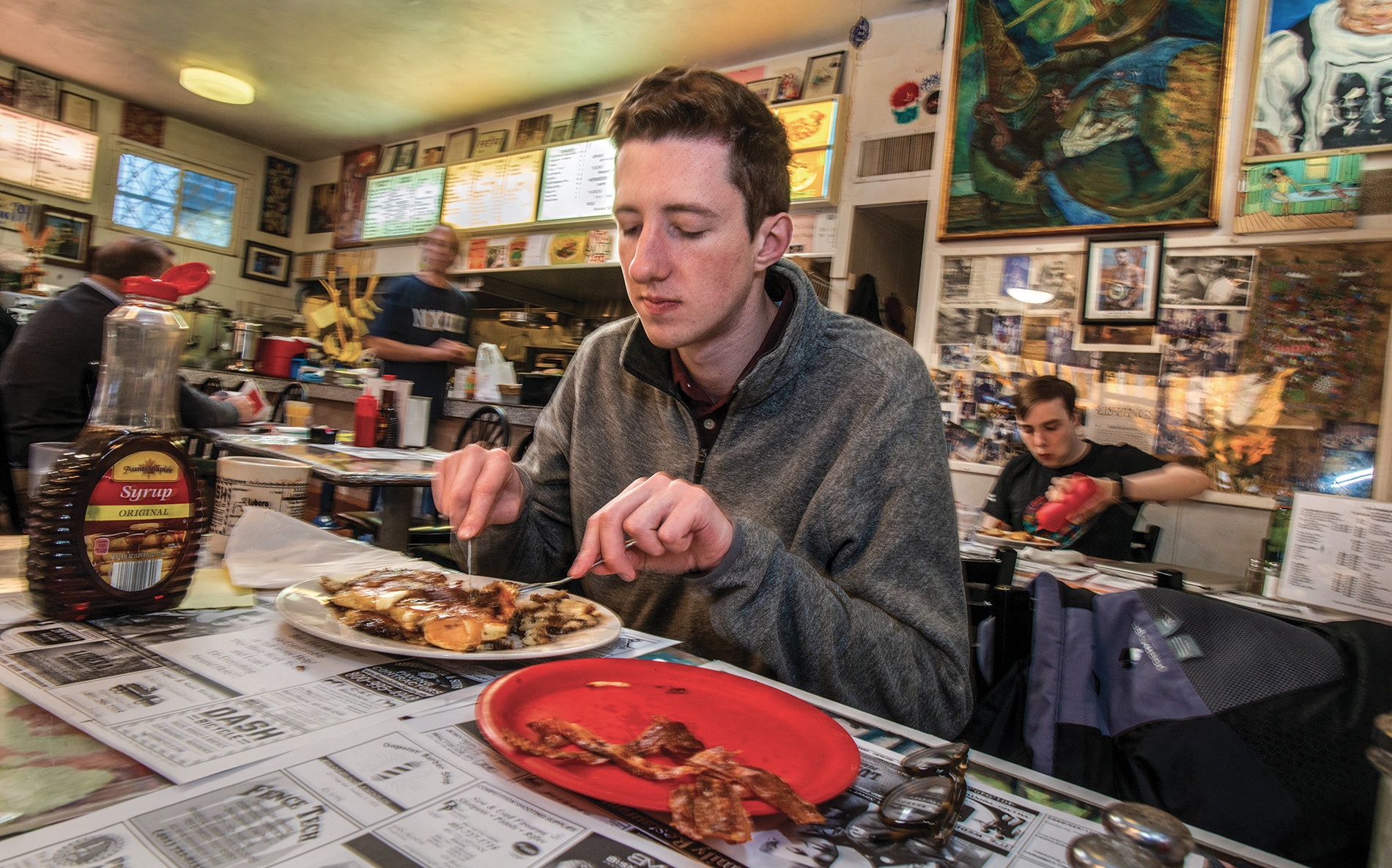 Deegan at the Brook Street diner that’s Louie’s on the awning, Loui’s on the sign, and Louis on the menu. Louis himself “wasn’t fussy,” says son John Gianfrancesco. Photo: David DelPoio
Student Life

It started last fall—freshman year—when a bunch of my friends were hanging out with some international students. There’s this international house called Buxton—they don’t start their parties until 2 a.m. One night we had a lot of fun at Buxton, danced until 4 a.m., had conversations lying on the grass outside, and then we all got hungry and were like, “Where should we go? It’s 5 a.m.” We looked up this place online called Louie’s and we went there and it was great. We all got pancakes. From that point on, whenever it was 5 a.m., it was Louie’s time.

I’ll have the usual
“Chocolate chip pancakes, sometimes bacon, sometimes toast. There have been occasions when people have gotten coffee. That’s typically not the move. This is actually how I got with my current girlfriend—we’ve been dating for just over a year now. We stayed up all night talking and I was like, “Hey, do you want to go to Louie’s?” We were holding hands and we walked into Louie’s and my friends were there; that was sort of awkward for a second. She got coffee. She hasn’t gone back—she gets, like, an appropriate amount of sleep.”

Apparently it’s a thing: upperclassmen were like, “Oh, yeah, I’ve been to Louie’s.” Last spring, there were a lot of seniors there at 5 because they wanted to do it once before they graduated. We told our friends about it. People are frequently up studying until 5 a.m. It’s that place you go when you’re sleep deprived but also trying to be social.

It’s this iconic family restaurant. It’s got that cozy, small-town vibe. There’re all the pictures on the wall, with everyone that has gone there in the past. They’re very friendly. We got to know the main guy that always serves us. He would joke, “This is your third time this week, what’s going on?”

First semester freshman year, I was probably going twice a week—Saturday morning, Sunday morning. There was a month or two stretch where my friends and I would also go once during the week, maybe a Wednesday morning, sleep a little bit, go to class, go back to sleep. During final exams, we probably went every other day.

Some of our friends say, “Oh, can we wake up early and go with you?” and we’re like, “Why would you? The whole point is that you stay up all night.” They open at 5, so if it’s 4 a.m., it’s like we gotta stay up one more hour, because then it’s Louie’s time.