Our Incarceration Addiction
Why are so many Americans in jail? Liberals and conservatives may disagree on the reasons, but there’s some consensus on solutions. 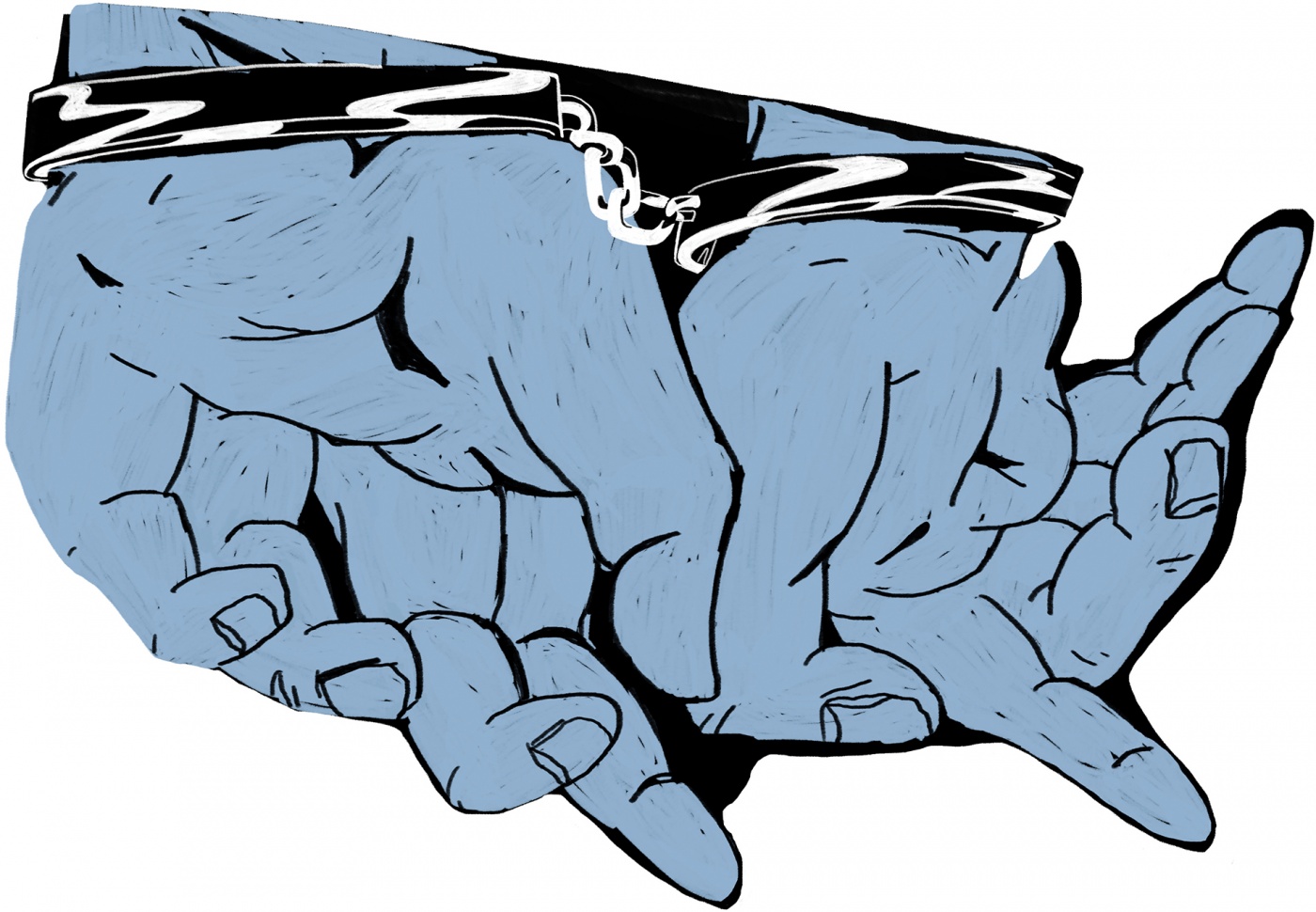 The United States has the world’s highest incarceration rate—655 inmates for every 100,000 people. Americans of color are disproportionately affected. In 2016, black Americans made up 12 percent of the U.S. adult population yet accounted for 33 percent of Americans behind bars. Among Hispanics, the ratio was 16 percent versus 23 percent. White Americans, meanwhile, accounted for 64 percent of the adult population and 30 percent of prisoners. The BAM spoke to three Brown researchers and an alum for their expert take on our incarceration situation.

Systemic Factors
Incarceration rates in the U.S. began to rise precipitously in the 1980s, says professor Tricia Rose, director of Brown’s Center for the Study of Race and Ethnicity in America (CSREA). Behaviors that had previously been considered to be small infractions were criminalized,  and poor communities of color were subjected to what Rose calls “hyper policing.” Once  a person was arrested, the sentence for similar crimes varied  significantly by race. The caste-like system it created, as Michelle Alexander notes in her book The New Jim Crow: Mass Incarceration in the Age of Colorblindness (a Brown First Readings selection in 2015), shares qualities with the system of racial segregation that was in effect from the late 1800s to 1965. Excessive policing and punishment of black Americans extends well past the streets into schools, child services, and housing, Rose says, creating more gateways to incarceration through suspensions, rejections, and punishments—the so-called schools-to-prison pipeline, for example.

According to Rose, mass incarceration is part of a broader systemic practice of anti-black racism that penetrates every facet of society—from housing to education to jobs—so undoing the damage requires a systemic approach. To that end, says Rose, the CSREA brings together scholars and others who are interested in thinking across fields and disciplines to envision creative solutions. “When you think systemically, you end up with a much broader conceptualization of the problem,” Rose says.

Personal Responsibility
Glenn C. Loury, Merton P. Stoltz professor of the Social Sciences in Brown’s Department of Economics, agrees that there’s bias in the criminal justice system but insists that racism doesn’t paint the complete picture. “Most of the racial difference is accounted for by the fact that offending rates are higher amongst African Americans and so incarceration rates are higher,” he says.

Loury attributes the high incarceration rates in the U.S. compared to other countries to lengthy prison sentences, politicians exploiting fears of crime, and a punitive rather than therapeutic way of responding to drug use. To lower the rates, Loury says we must get to the root of why people of color are more likely to commit crimes. He points to factors including poverty, a lack of education, poor employment prospects, and underinvestment in neighborhoods where people of color live. Addressing some of these could lead to a crime drop and, hence, fewer people incarcerated, he says.

More attention should also be placed on making sure that former inmates don’t return to prison, he says. “We’re not investing enough in thinking about what to do to help people transition back into productive lives.”

But Loury says that people of color can’t simply point the finger outward—some of the burden falls on the communities where crime rates are higher.  “A person always has choices about what they do with their life,” Loury asserts. Churches and community organizations can help teach young people responsibility, Loury says—and men’s organizations can mentor young men to make  more constructive choices.

Poverty's Impact
Adaner Usmani, a postdoctoral fellow at Brown’s Watson Institute for International & Public Affairs, became fascinated with mass incarceration after reading The New Jim Crow. Originally from Pakistan, he says he “realized something really rotten is going on in the United States."

Usmani collaborated with John Clegg,
a PhD candidate at New York University, to write “The Racial Politics of Mass Incarceration,” a working paper that analyzed 300,000 responses to public opinion polls taken between 1955 and 2014 and looked at the role that black elected officials and their constituents played in the crackdown on crime that led to higher incarceration rates.

Usmani agrees with Loury’s assertion that African Americans have been impacted more heavily by tougher crime laws because they commit crimes at higher rates than whites. But he adds: “To me, that’s the story of concentrated poverty and segregation. These communities lived in conditions unlike those found in other communities.”

Instead of throwing prisons and police at the problem, Usmani says a better solution would be to fight the root causes of crime through social programs. Currently, $182 billion in taxpayer money goes to run U.S. prisons every year—yet a 2017 report from the Prison Policy Initiative says there is no significant positive effect on public safety to show for all that spending. Usmani believes that more jobs programs, better funding of inner-city schools, and more affordable housing would give poor people more opportunities and fewer reasons to commit crimes. “We don’t tax rich people and spend on poor people enough,” he says. To empty the prisons, “you need to fight poverty and segregation. That’s what undoing American mass incarceration would look like to me.”

Bipartisan Disgust
According to Yale University law professor and former public defender James Forman Jr. ’88, author of the 2017 Pulitzer prize–winning book Locking Up Our Own: Crime and Punishment in Black America, the bipartisan support for the federal First Step Act, which took effect in December, is a “sign that this has pierced the consciousness of America.” We lock up too many people and we all know it.

The new law, which applies only  to the 12 percent of incarcerated people who are in the federal system, provides for reduced sentences for people who got long mandatory minimums, Forman says. “In D.C., where I practiced, it was a 30-year maximum for first-time sale of drugs.” What the average person doesn’t understand, he says, is that “if you’re looking at such a long maximum, you’re going to take a plea offering even if you think you have a chance of being acquitted at trial.” Next, Forman would like policymakers to target cash bail,  “the clearest example of criminalizing poverty that we have,” and give ex-convicts a fair chance to re-enter society.

Forman  prefers the term “criminal legal system.” He explains: “It seems odd to talk about a system that is so rife with injustice as a ‘justice system.’”

Reader Responses to Our Incarceration Addiction