The Art of Display
Brown’s extensive collections give an art history PhD student the opportunity to put curation theory into practice. 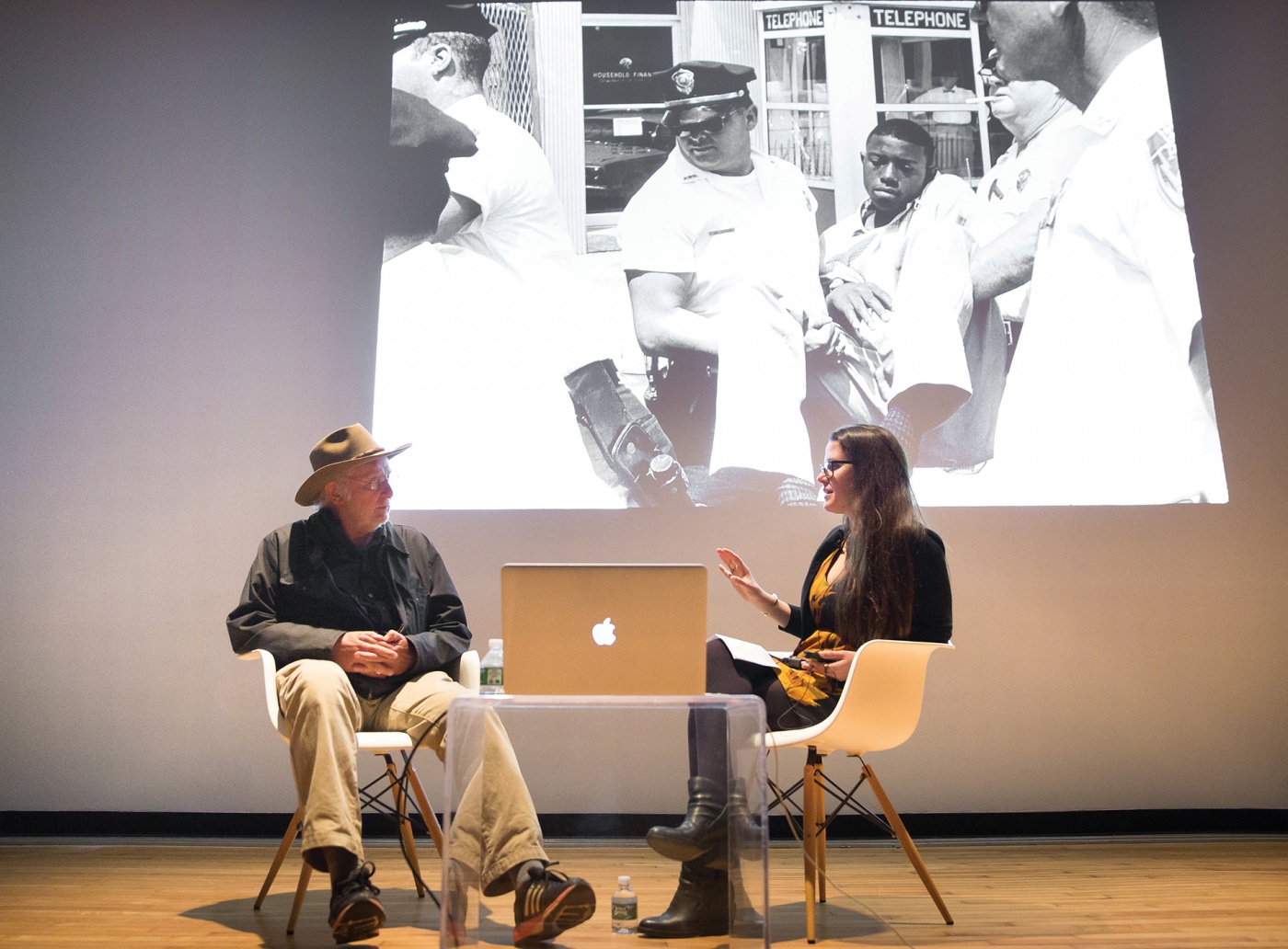 Danny Lyon, left, talks with curator Allison Pappas ’08 about how his photography evolved from journalism to art as it bore witness to turbulent times. jesse banks

At the David Winton Bell Gallery on the first floor of List Art Center, a 1963 photo of a motorcycle rider sitting alone at a diner hangs next to an image of a tense Student Nonviolent Coordinating Committee (SNCC) student sit-in at a diner. “It’s a blatant comparison but still really powerful to see the choices that the biker is allowed to make in 1963 versus the choices the students are allowed to make,” says exhibit curator Allison Pappas ’08, a third-year doctoral candidate. “Choosing to be the outlaw or choosing to say, ‘No, I am an equal person.’”

Pappas found her calling as a curator her sophomore year, after enrolling in a class co-taught by the director of the Haffenreffer Museum of Anthropology. “I’ve always loved museums,” Pappas says. “But it had never crossed my mind that that could be a job. I came home from the first day of class and called my mom and said, ‘Did you know that there are people who get to work in museums?’” 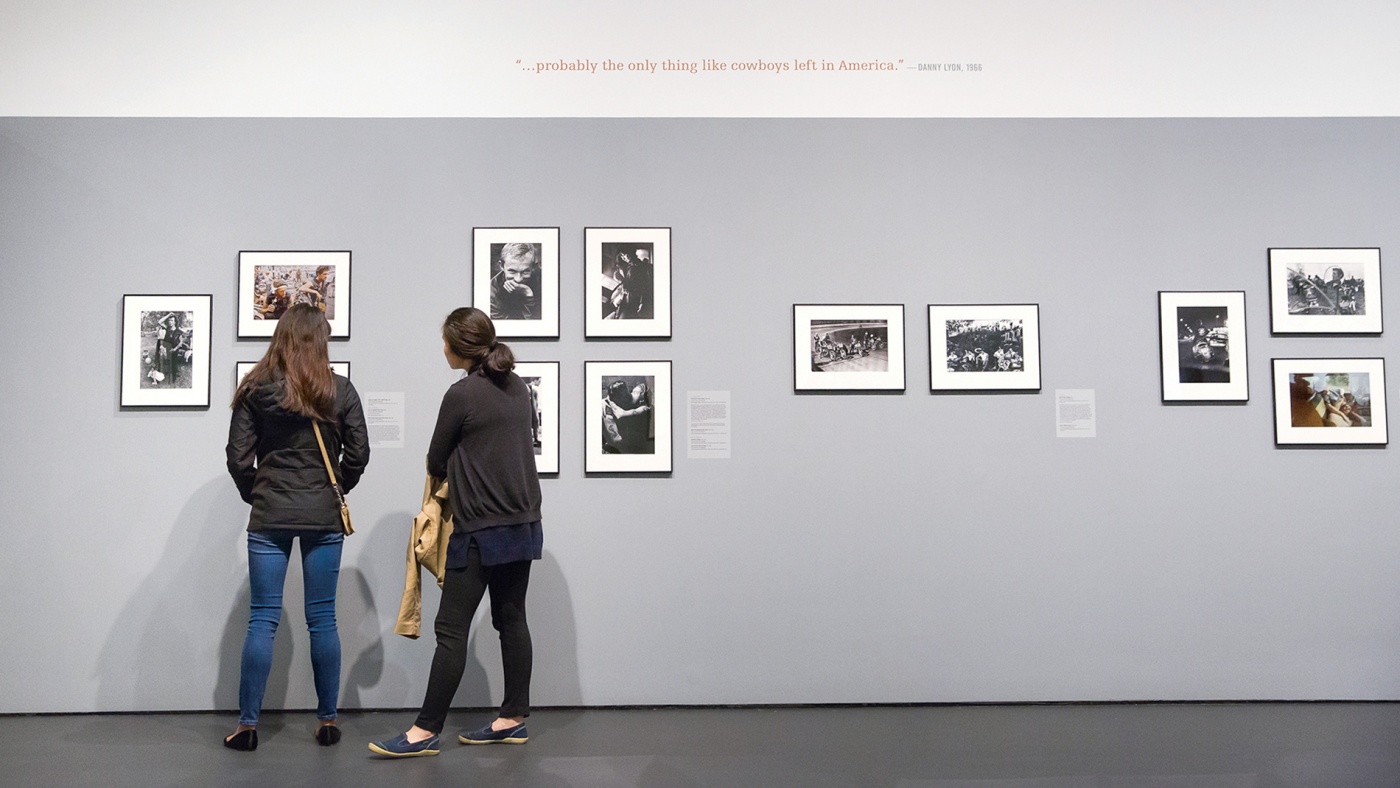 “Curatorial work is teaching,” Pappas says. “But it’s at a more public scale.” Along with the layout of the photographs, Pappas had to consider the picture frames, as well as the placement of the walls and the exact shade to paint them—she chose a medium gray to enhance the contrast and make the black-and-white photographs “pop.” Most importantly, Pappas had to come up with the captions and text that hold the exhibit together. A curator’s text must speak both to individuals with no knowledge of the art and to those with expertise in the subject. In keeping with Lyon’s respect for the agency of his subjects, Pappas foregrounded Lyon’s own voice by including direct segments from his books and quotations from the subjects he photographed and often befriended. Then she added her own reflections on the different themes within each photograph. Motorbiking, she writes, holds “an allure with a dark underside, a recklessness constantly at risk of driving the spirit of freedom into oblivion.”—J.B.

Pappas quickly embraced curation as a career. Following an exhibit on Meso-
American masked dance at the Haffenreffer for her senior honors thesis, she worked at the Getty and with the Houston Museum of Fine Arts. Now she’s back getting her PhD in the History of Art and Architecture—a program where half of the graduates end up in academia and the other half as professional curators. Pappas’s exhibit at the Bell, “The Only Thing I Saw Worth Leaving,” is a retrospective of civil rights documentary photographer Danny Lyon.

For Pappas, the graduate art history program has offered the opportunity to dive into not just the history and theory of art, but also its practice, thanks to studio art workshops. “Working through processes with our own hands encourages us to ask different sets of questions about materials, tools, and techniques in our scholarship,” Pappas says.

Meanwhile, classes like “Museums, Histories, Critiques,” taught by Sarah Ganz Blythe, deputy director of exhibitions, education, and programs at RISD, have allowed Pappas to situate herself within the intellectual tradition of curation and analyze the evolving role of museums in society. Students also have the opportunity to conduct research abroad and are often employed in hands-on proctorships across the world (or across the street, in the RISD museum).

Once a year, the Bell Gallery allows a student to create an exhibit drawing from the gallery’s permanent collection. Curating the Lyon exhibit was an extracurricular activity for Pappas, but it drew heavily on what she’s learning in the graduate program. To prepare, she carefully looked through each of the 235 Lyon photographs in the Bell’s collection and read all of Lyon’s books and writings to understand the connections between his projects and how he thought about his own practice.

While earlier retrospectives of Lyon, like the Whitney’s in 2016, organized his work in chronological order, Pappas decided to break Lyon’s work apart and weave it together anew. She grouped Lyon’s images around five themes: empathy, freedom, history, destruction, and narrative. The empathy section, for example, focuses mainly on portraits in which the subjects stare back into the camera, whether a young civil rights activist in the middle of a protest or an incarcerated man looking out from the shadows of his cell.

The resulting exhibit is a contemplation of what Pappas refers to as “the intersections and contradictions of different worlds,” such as those of the white motorbike rider and the SNCC students.

Lyon began his career covering the civil rights movement in 1963—the summer before his senior year at the University of Chicago—and later became a staff photographer for SNCC, despite being white. The exhibit is part of the Brown Arts Initiative and the Bell Gallery’s co-produced series On Protest, Art, and Activism, and Pappas believes that Lyon’s activism can inspire students and contribute to political dialogue on campus.

“That’s why this has to be displayed for the Brown community: to show what students can do!” Pappas says.

Lyon produced several iconic ’60s photo projects, and Pappas was faced with the challenge of uniting these seemingly disparate bodies of work: Iron Cross–clad bikers, civil rights activists, prisoners, crumbling buildings. “In fact, the ideas behind them have a lot in common,” Pappas concludes. “They address big questions about what it means to be American: What are our commitments and values?”

When Lyon himself toured the exhibit in early November, he read each plaque and reminisced with Pappas over the story behind each photograph. Adjusting his cowboy hat, Lyon recalled how he and Hunter S. Thompson corresponded over their respective motorbike projects. He seemed delighted with Pappas’s experimental presentation. “No one has ever done it this way before,” he told her.

“There’s a real sense of stewardship,” Pappas says. “And a commitment to protecting and sharing the objects in the collection that you are responsible for, so that countless people can enjoy and learn from them now and in the future.”

Reader Responses to The Art of Display