100 Years of Gratitude
At her 80th reunion, she says: “There’s excitement everywhere. What a day!” 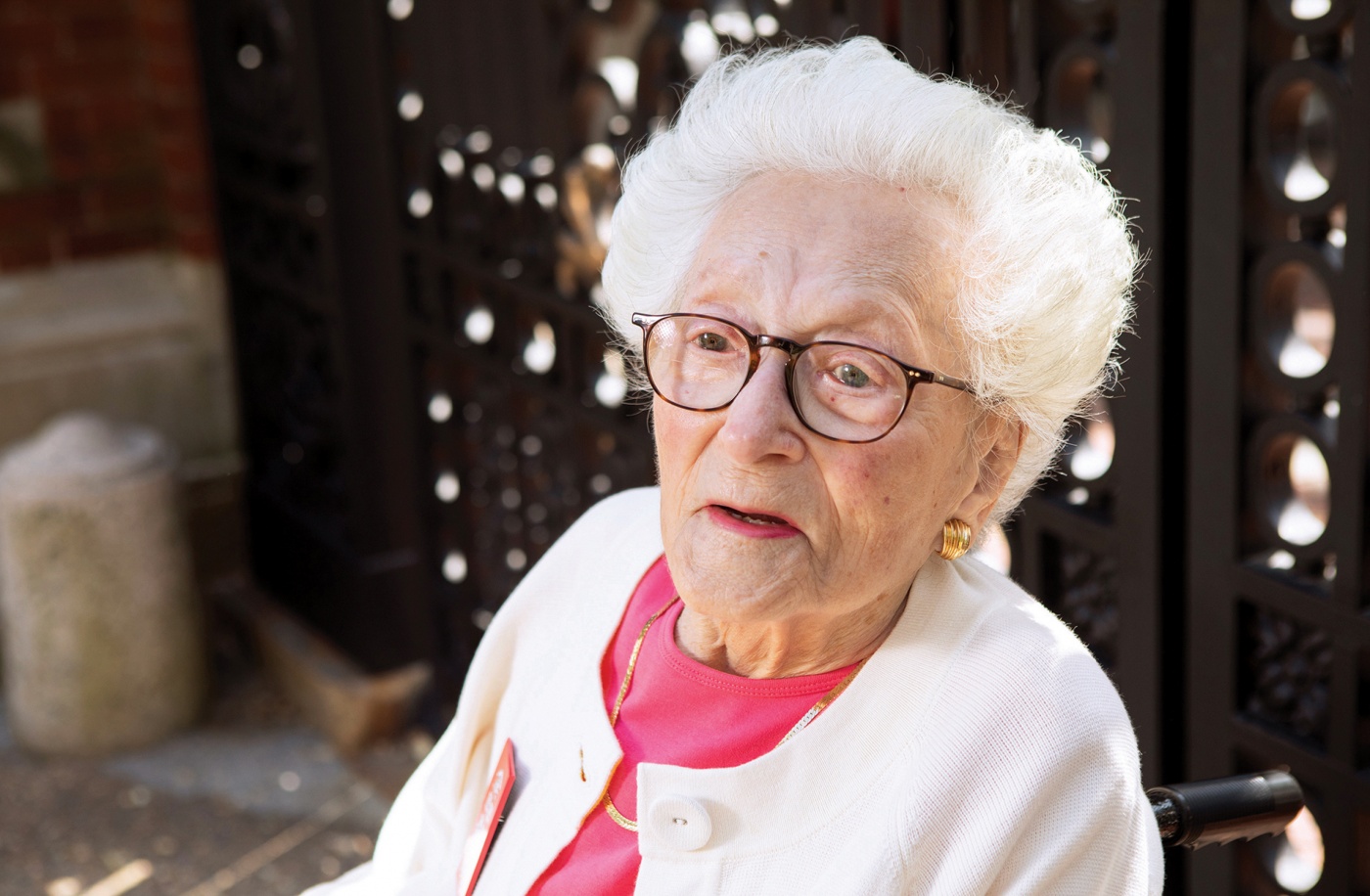 Teresa Elizabeth Gagnon Mellone matriculated at 15 and completed a master’s in teaching at 43. PHOTO: Jake Belcher

Teresa Elizabeth Gagnon Mellone ’39, ’62 AM, remembers hearing a new Pembroke friend wonder, “Who’s the baby?” when the class of incoming first years heard that one of their number was just 15. Mellone, born in Woonsocket, R.I., in 1919, resolved that her fellow students wouldn’t find out that she was the one. She didn’t succeed, to her chagrin: none of the Brown men would date her, she says, because she was so much younger than them.

No matter: the language wunderkind, who fought unsuccessfully to take Spanish at Brown (she was denied a seat because there were no other women enrolled) filled her days with French and Italian language classes and whatever activities she could fit around her schedule as a commuter from Woonsocket, R.I. She met Sal Mellone, who wasn't a Brown student but attended an Italian language club she enjoyed; as she headed home most days, she'd find his car on Benefit Street, with him leaning nearby, having memorized her train times. She taught at her hometown high school after graduation, then married in 1947—Sal “was very persistent”— and moved to Ansbach, Germany, where she taught at a U.S. Department of Defense school and quickly became fluent in German.

“I’ve always had an aptitude for languages,” she observes, surveying the crowds at Brown’s 251st commencement with satisfaction, before going on to sing “Alma Mater”—yes, all the verses. She’s 99 years old now and still prefers not to bring up her age. Her dedication to Brown has been unwavering: she’s been a dedicated volunteer leader over the years, and hasn’t missed a five- or ten-year reunion since graduating. This year, she and two of her three daughters, Kathy Mellone and Mary Beth Barnard, enjoy their usual circuit around the circumference of the Green while attracting cheers from about-to-be graduates who see her “80th Reunion” sign.

Mellone’s father died when she was 5, Mellone told the Pembroke Center Oral History Project in 2012, and her grandfather took in the young family, supporting them with his wholesale produce business. Ahead of his time, he called Mellone’s mother his “right hand man,” and she attended business school to help him run the company. When Mellone showed signs of precocity, reading and writing by 4, her mother took her straight to the superintendent of schools, who promptly enrolled her in first grade. From the start, “I always loved learning,” Mellone said. “I think the day I was born, I knew I wanted to be a teacher. I really wanted to be a high school teacher—a French teacher.”

That stance was thanks in large part to educators who made a deep impression on Mellone, introducing her to the languages her family had worked hard to leave behind. Her father’s family was French, her mother’s Italian, but she grew up hearing neither language spoken—unless it was because the adults “didn’t want the kids to understand what they were saying.” Once introduced to them, she never looked back.  Her advice on the best way to learn a language? “Eat it, sleep it, drink it, be in the country where it’s spoken. Everything is not done within the walls of a school. When I was teaching, I always felt the walls were in the way.”  Of her career, teaching medieval and modern history, Italian, and French at the high-school level, and later spanning every elementary-level grade, she says: “I really loved every minute of it.”

At this year’s Commencement, Barnard reflected on the incredible sustained vibrancy of her mother’s life and career. The credit, Barnard says, goes to Mellone’s attitude. “She’s always just felt incredibly grateful, looking at life as a great adventure. That’s the secret of her longevity.”

Reader Responses to 100 Years of Gratitude

In reference to “100 Years of Gratitude,” July/August 2019: It’s always nice to read about someone who has made it to 99. Mary Beth Barnard says her mother, Teresa Elizabeth Gagnon Mellone ’39, ’62 AM, has “always just felt incredibly grateful, looking at life as a great adventure. That’s the secret of her longevity.” This overlooks several other factors that are involved in longevity: genes, luck, and access to good medical care. Most people who are as grateful and adventurous as Ms. Mellone don’t make it to 99. Some don’t even make it to 50, and not because they lack Mellone’s virtues.