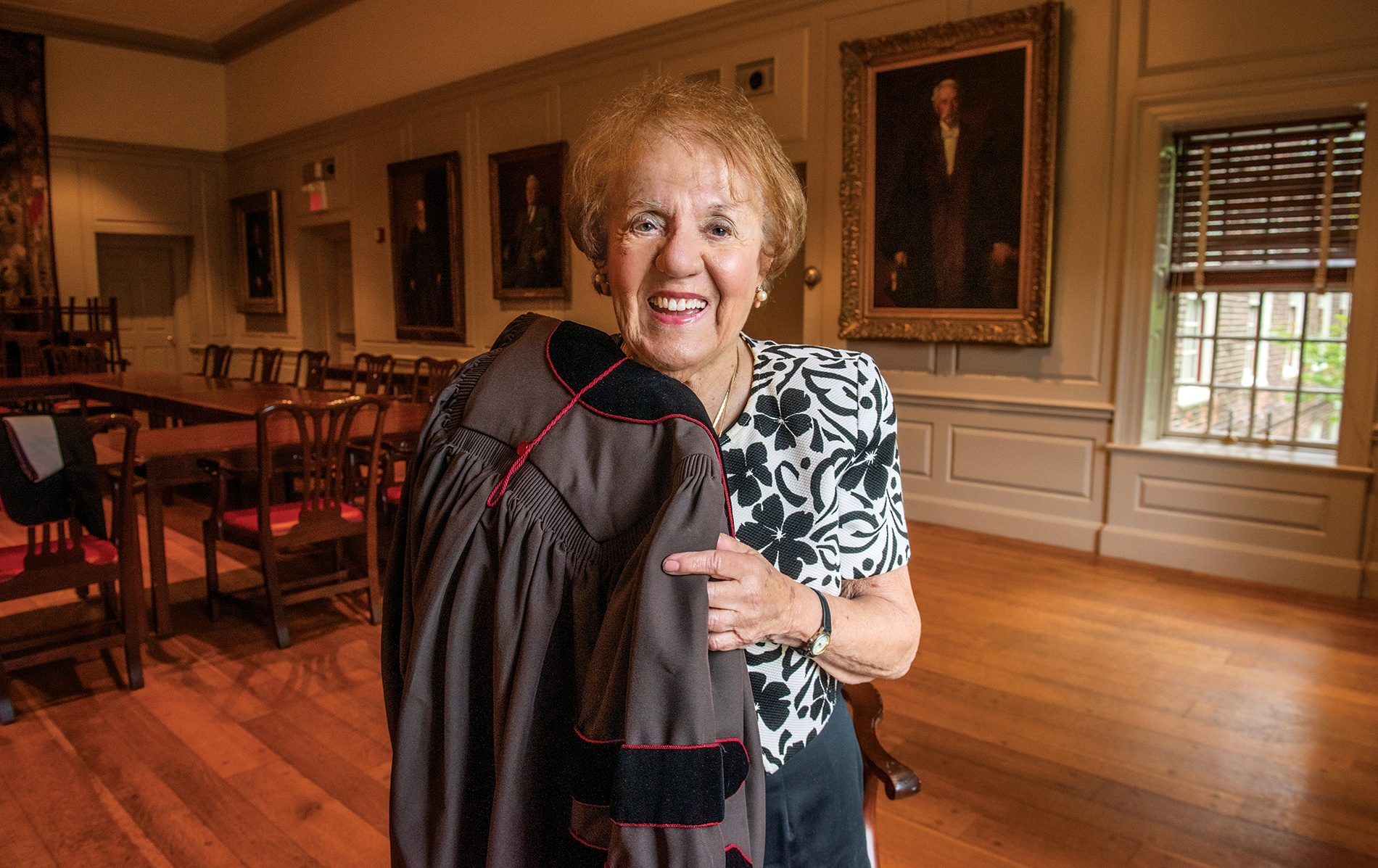 Callas, 93, with the honorary degree regalia in the Corporation Room at University Hall.Photo: David DelPoio
Ever True

Why did B.B. King sing to President Ruth Simmons? It’s not a trick question: Helping King put on his robe before he received an honorary degree from Brown in 2007, Virginia “Ginie” Callas ’48 let the blues legend know that
Stevie Wonder had sung to President Howard Swearer on that same stage two decades earlier, breaking the honorary degree recipients’ usual code of silence. King couldn’t help but compete.

After Commencement, King’s associates sent her guitar picks and a note that Callas says was “to thank me for all the attention.” By the time Callas met King, she was already well experienced with giving out that sort of attention, having helped honorary degree recipients like Steven Spielberg, Jordan’s Queen Noor, and former French prime minister Valéry Giscard d’Estaing put on their robes for almost every commencement since 1982. “These are your guests,” says Callas. “And in my culture, we make guests feel at home.”

Callas was born to Greek Orthodox immigrants and grew up in New Bedford, Massachusetts. She remembers her father, a candy shop owner, telling her, “You get an education, but you marry a Greek.” He didn’t want her going too far from home, so she enrolled at Pembroke College. “I did date a few Greeks,” Callas says, though she never married. The 1948 yearbook remembers Callas as a “champion of the Greek cause,” “the organizer behind East Andrews parties” with “an endless supply of candy bars.” She says she nearly failed her second try at the swim test, a graduation requirement back then, and quips that the examiner must have thought, “Let me pass this girl before she drowns.”

After graduating with a degree in English, Callas stayed in Providence, getting a job as a secretary at the University. She ended up working in Residential Life and, when the Graduate Center opened in 1965, she became the manager. Callas’s loyalties remain, teasing a current Grad Center resident with “Don’t ever tell me how much you hate the Grad Center, or I’ll leave.” Though she admits to being “not
five feet anymore,” Callas
is still a big personality.

After 41 years of serving the University, Callas retired as assistant director of residential life. “For me, Arnold, Bigelow, Applegate, Wriston, and Keeney were friends, not lounges or residential areas,” Callas said in her retirement speech in June  1993. Russell Carey ’91, ’06 AM, Brown’s executive vice president for planning and policy, was one of Callas’s employees when he was an undergrad. “She has that ability to make people feel welcome and respected and really well cared for,” Carey says.  (To Callas, “He’s still Russ.”)

Getting Callas to really retire is another story. In addition to her work for her church and on several boards, she still wakes up at 5 a.m. (“I’m not a morning person,” she admits) every Commencement to get ready for the robing.  Her approach to caring for celebrities is no different than it was for students. Respect is key, Callas says, and she’s very careful not to be intrusive as she zips up their robes and helps them select the right hat.

It’s close quarters, though, and sometimes not just with the recipient—Callas remembers zipping up Israeli Prime Minister Shimon Peres and feeling the breath of his bodyguard on the back of her neck. She doesn’t volunteer anything personal, but Callas will answer direct questions, like Robert Redford’s “Should I wear sunscreen?” or indirect ones, like when Laura Linney ’86 told Callas her mother had told her not to wear the shoes she’d chosen. “Take it from another person who’s gonna talk to you like your mother,” Callas told Linney. “Don’t wear those shoes!”

One year, she ended up conspiring with Ben Affleck on how best to boast to his friend Matt Damon about the honor. “You really want to upset Matt?” she remembers asking, a twinkle in her eye—and suggested he highlight his name in the program and send it to Damon without comment. Affleck later insisted on taking a picture with Callas, bending down from his height of 6’4” so they’d both be in the frame. Callas would never have asked. She’s all professionalism and protocol. But Redford was a challenge. “I didn’t think I’d survive that graduation,” she admits. “I’m fainting because he’s so gorgeous.”

Of her decades as a staffer at Brown, Callas says, “I don’t think I was mothering everybody.” Then she pauses. “But I think maybe I was.” Carey gives a similar summary of Callas’s work with both students and honorary degree recipients. “She makes them feel comfortable putting on this robe that might feel a little silly but is part of a centuries-long tradition,” he says. “They have a great experience.”

Reader Responses to Robing Them Right