The Stigma Slayer
A student-founded arts organization aims to combat silence and stigma around mental illness. 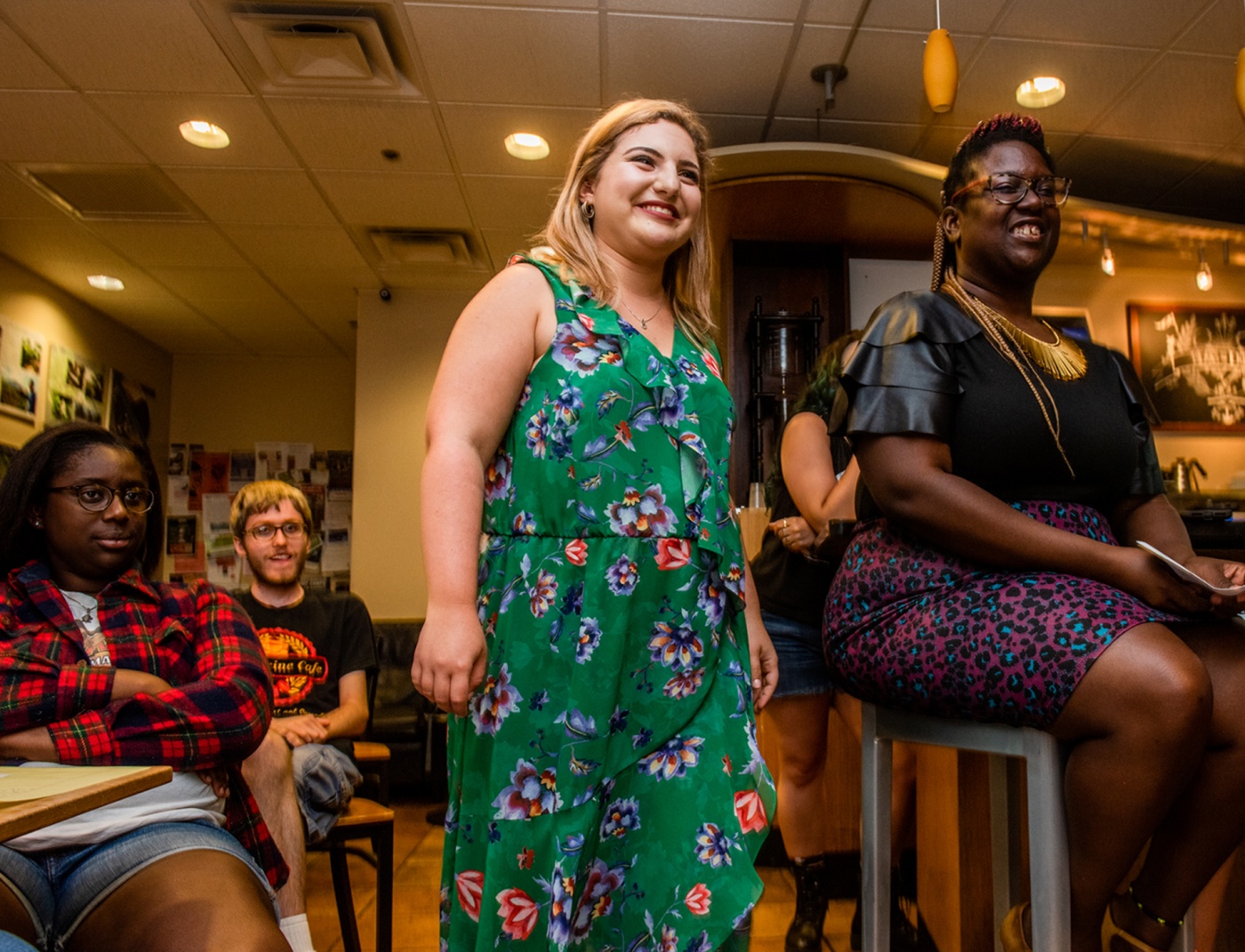 After Bella Roberts ’20 lost two close hometown friends to suicide in 2016, she relied on poetry to work through her feelings. Her community in Gaithersburg, Maryland, didn’t talk much about what happened, but when Roberts started sharing her writing at open mics, she discovered strangers would often approach and start conversations with her about their own experiences dealing with mental illness.

“Art can be a great way to process trauma,” Roberts says. “It serves as a gateway between people, allowing individuals to feel they can have hard conversations with each other.”

People often shun the mentally ill and stigmatize mental health problems, Roberts says. But around one in five Americans suffers from a mental illness every year.

During her spring semester in 2018, Roberts took a class through the Swearer Center, “Social Change and Building Powerful Organizations.” There she met another student, Nicole Spring ’20, who shared her belief in the power of performance and art to organize and inspire discussions around mental illness. They started holding events where people could perform art exploring mental health issues.

“What we found is there was a pretty large unmet need of the community,” Roberts says. “It felt like people didn’t have these spaces to come together and just listen and understand each other.”

The two started the process of becoming a nonprofit in the summer of 2018, eventually becoming ARMS—Art to Reduce Mental Health Stigma—a nonprofit corporation, that September. They soon hosted their first official event, “Express Your Psych, Open Mic” at the AS220 theater in downtown Providence. Even attendees who didn’t have poems stood up and shared their stories, and afterwards people exchanged phone numbers, some connecting as writing partners. ARMS now has over 40 team members, many of whom came on board after attending an event over the past year.

One ARMS member, Kahini Mehta ’21, says she suffered from anxiety and depression for much of her life. She wrote poems to cope, and one of her greatest ambitions (and biggest fears) was to share her work publicly. Drawn to an ARMS open mic last November featuring renowned poet Blythe Baird, Mehta decided to read her work. At first, she says, getting on stage felt like jumping off a great height but then she focused on her words:

When she reminds me I’m a “work in progress”

All I can think of are signs on construction sites—

And I can’t help but ponder what a miserable

thing I have chosen to share my fate with,

Because I’ve seen the looks that people give streets

that are being dug into; disgust and impatience

enough to fill the holes made by fingers of

steel reaching in and unearthing, pulling and destroying—

And I can’t help but feel like a construction site.

When she finished, she felt a gush of relief that turned into a lasting confidence.

“I used to be pretty ashamed of my own mental health issues,” Mehta says. “But working with the organization, I’ve learned it is not something to be ashamed of but something to speak up about.”

She now serves as a volunteer for ARMS after Roberts invited her to join that night and is pursuing a degree in psychology to help other people work through their issues.

ARMS is not simply focused on helping Brown students, though, but on reaching out to the entire Rhode Island community. Roberts and her organization have hosted more than 25 events, connected to a thousand people, and made tangible impact—surveys conducted by ARMS showed that 100 percent of people reported they would come back, and 85 percent said their perception of stigma attached to mental illness had been lowered by attending an event.

“Art can be a great way to process trauma. It serves as a gateway between people, allowing them to feel they can have hard conversations with each other.”

Roberts—along with Beth Pollard ’21, who just joined this summer—participated in the Nelson Center’s Breakthrough Lab this past summer, receiving training, support, and resources for fundraising and grant applications. Through B-Lab, ARMS developed a new mobile app that will allow users to log instances of internalized and externalized stigma. The data will allow ARMS to better target different sources of stigma that people experience. This helps further the organization’s primary focus, which is “honing in on what the community wants and needs,” Roberts says, by reaching out to different mental health organizations around Rhode Island and hearing directly from community members.

All ARMS events have been hosted off Brown’s campus and are open to the public, usually in partnership with community organizations. ARMS has held a film festival—Flip the Script—at the Avon Cinema, a comedy night with Providence Improv Guild, and numerous poetry workshops and performances.

According to Pollard, the nonprofit is working on a new, long-term business model that will focus on connecting local artists with businesses to host performances, workshops, and discussions around mental health. ARMS would provide the platform, resources, and support for both the artists and the businesses, while allowing each artist to bring their own unique approach.

“We figured out how to get meaningful expansion with other partners in the community who are interested in furthering our cause,” Pollard says. “The big picture is that we’re looking to making it not just a local Rhode Island business, but making our system available to any community.”

Melissa Withers, cofounder and managing partner at RevUp Capital, watched Roberts pitch ARMS at a competition last year and decided to come on board as an advisor. She was impressed by the authentic connection she saw between Roberts and her nonprofit.

“It was clear that she was really committed to the project,” Withers says, “as an entrepreneur but also a human, who really believes that people deserve better solutions for mental health services.”

Reader Responses to The Stigma Slayer