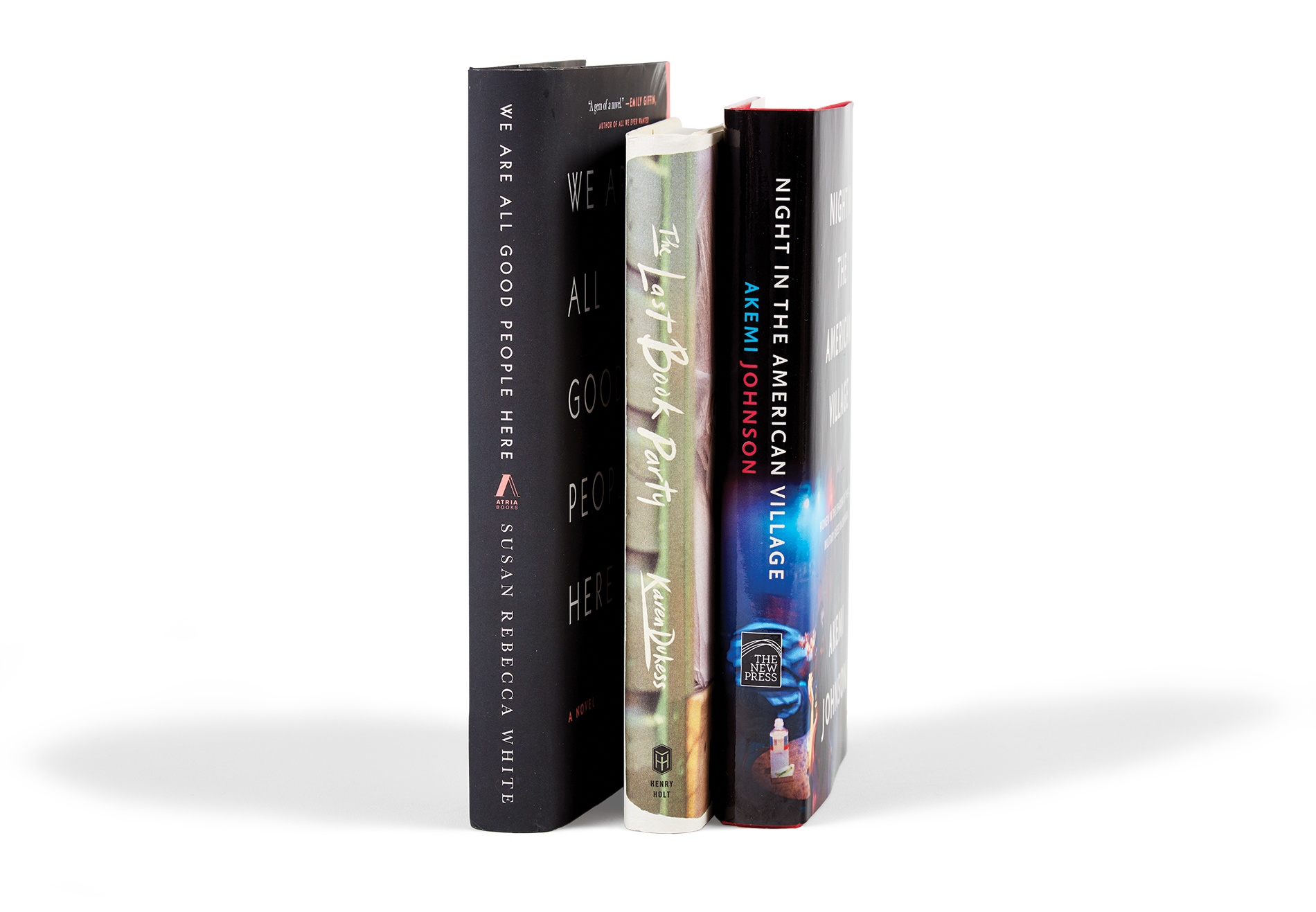 It’s 1987, the Bangles are on the boombox, literary agents still send manuscripts out in white boxes, and Eve Rosen, a Brown grad who longs to be a writer but is marking time as an editorial secretary at a New York publishing firm, gets an invitation to a literary house party on Cape Cod. There she meets Henry Grey, a New Yorker writer she has corresponded with, along with Franny, his son, and Tillie, his poet wife. The narrative shuttles from Truro to Manhattan and back as Eve leaves her job to become Henry’s research assistant. Affairs, awakenings, and betrayals follow in this entertaining coming-of-age debut.

Okinawa is home to more than 50,000 Americans and more U.S. military bases than anywhere in Japan. In this fascinating, deeply reported debut, Johnson explores the complex ways in which the U.S. presence influences life on the island. Structured around the stories of eleven women, including Okinawan activists, military wives, American base workers, and friends of Johnson’s when she lived there, the result is a nuanced chorus of perspectives and a compelling dive into the shifting mix of Japanese, American, and Okinawan cultures in Japan’s southernmost prefecture.

This multigenerational saga chronicles the twined friendship of two roommates who meet on move-in day at Belmont College in Virginia in 1962. Daniella Gold, whose parents are middle-class liberals from Washington D.C., and Eve Whalen, from an upper crust Atlanta family, form a surprising and nearly instant bond. The novel follows the arcs of their lives—as Eve becomes radicalized and Daniella takes a more pragmatic route towards building social justice—on through civil rights struggles, Vietnam protests, and into the early 1990s, when their daughters’ lives take hold of the narrative. A wide-angle read tracing how the bonds of early friendship can fray but still hold.

Before and After the Book Deal: A Writer’s Guide to Finishing, Publishing, Promoting, and Surviving Your First Book by Courtney Maum ’01 (Catapult)

Cook, Taste, Learn: How the Evolution of Science Transformed the Art of Cooking by Guy Crosby, ’69 PhD (Columbia)

Ecopiety: Green Media and the Dilemma of Environmental Virtue by Sarah Taylor ’90 (NYU)

Freedom Roots: Histories from the Caribbean by Laurent Dubois and Richard Turits ’83 (UNC)

Ignore Your Customers (and They'll Go Away): The Simple Playbook for Delivering the Ultimate Customer Service Experience by Micah Solomon ’87 (HarperCollins)

Put It On The Windowsill: An Italian-American Family Memoir by Marcia Gagliardi Brennan, ’93 AM, ’97 PhD (Dark River)

The Young Lords: A Radical History by Johanna Fernández ’93 (UNC)

Who Says You're Dead?: Medical & Ethical Dilemmas for the Curious & Concerned by Jacob Appel ’95, ’95 AM (Algonquin)

Breathless by Eric Chason, Professor of Engineering (Circle of Spirit)

Give and Take: Developmental Foreign Aid and the Pharmaceutical Industry in East Africa by Nitsan Chorev, Harmon Family Professor of Sociology and International Studies (Princeton)

Utopophobia: On the Limits (If Any) of Political Philosophy by David Estlund, Lombardo Family Professor of the Humanities (Princeton)

Diamond: A Novel of the American Revolution by Paul Hammond ’65