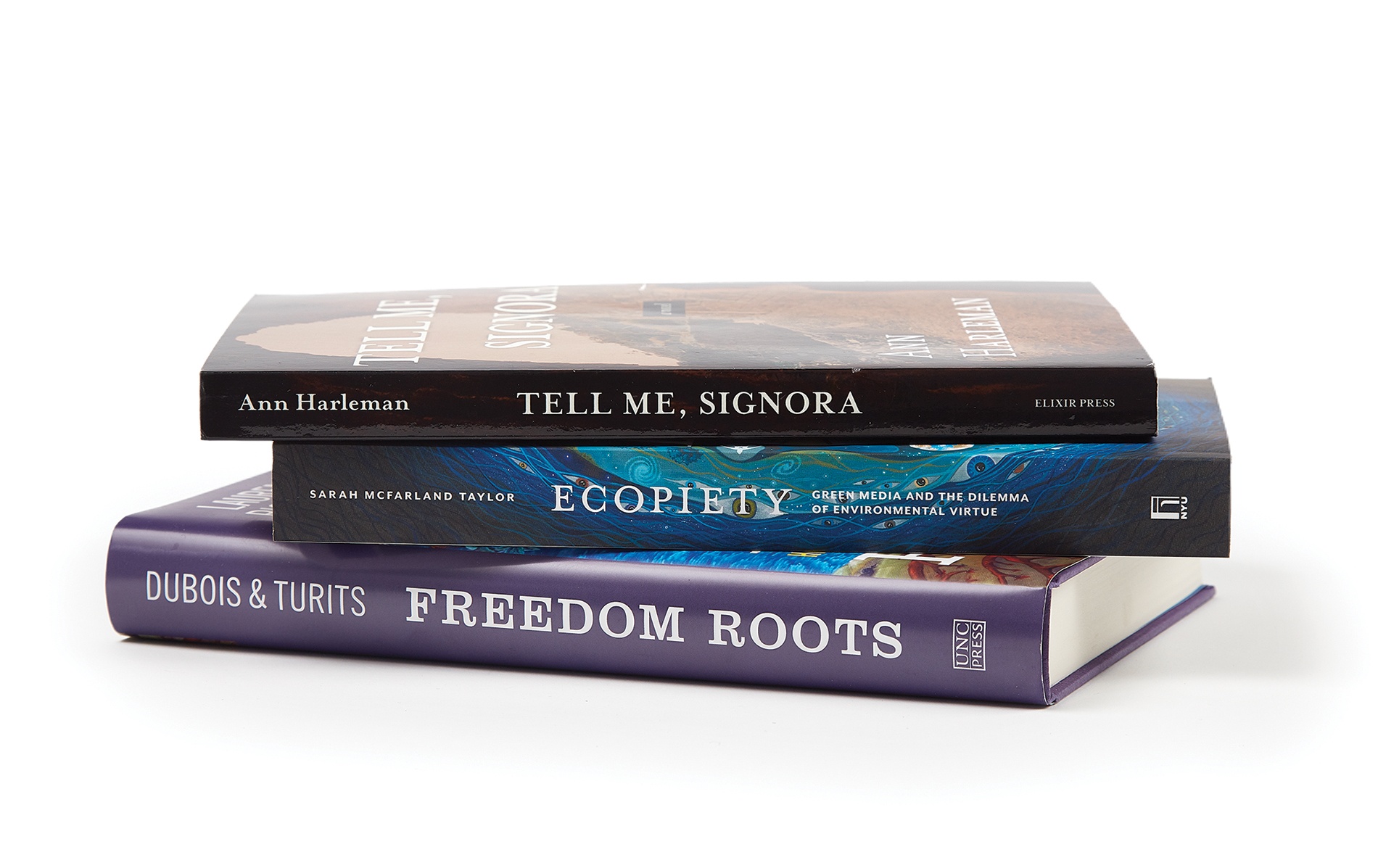 Tell Me, Signora by Ann Harleman ’88 AM (Elixir Press)

Just after 9/11, and following the slow death of her husband from multiple sclerosis, Kate Hagesfeld flees Providence and heads to a villa outside Genoa for a three-month stay at an academic center. Kate plans simply to revive her long-shelved career as an archaeologist. Instead, she is drawn to helping a trio of Kosovo refugees and finds herself facing a decision with huge consequences. In her third novel (Bitter Lake, The Year She Disappeared), Harleman, who is also a Visiting Scholar in American Studies at Brown, has created a lush, engaging, and deeply satisfying narrative.

Like a birder strolling through popular culture, Taylor has collected sightings of ecopiety—moments where “greenwashing” is used to offset or ignore a darker reality. A professor of religious studies at Northwestern, Taylor describes situations like the one in Fifty Shades of Grey where Christian Grey’s romantic behavior is meant to be countered by the fact that his company works to save the environment. In this detailed, theory-infused book, she argues that while we will never be able to green-shop our way out of the climate crisis (just buying a Prius won’t do it), we can invent narratives to shift social attitudes—and that may help save the planet.

The Caribbean has been squeezed and molded by colonialism from both sides of the Atlantic for at least the last 300 years, and in some cases for centuries more. This varied, wide-angle history, one that rolls on from first contact through plantations, slavery, peasants, and revolutions, centers on how land was used by the exploiting empires and the ways different communities pushed back. The focus here is on the stories of populations who have fought, with more or less success, to imagine alternatives to imperial rule.

From Here to Equality: Reparations for Black Americans in the Twenty-First Century by William A. Darity ’74 and A. Kirsten Mullen (UNC)

The Visceral Logics of Decolonization by Neetu Khanna ’03 (Duke)

What's the Point of College?: Seeking Purpose in an Age of Reform by Johann N. Neem ’96 (Johns Hopkins)

Avoiding the Terrorist Trap: Why Respect for Human Rights is the Key to Defeating Terrorism by Tom Parker ’06 AM (World Scientific)

The Savvy Ally: A Guide for Becoming a Skilled LGBTQ+ Advocate by Jeannie Gainsburg ’85 (Rowman & Littlefield)

The Woman on the Windowsill: A Tale of Mystery in Several Parts by Sylvia Sellers-García ’98 (Yale)