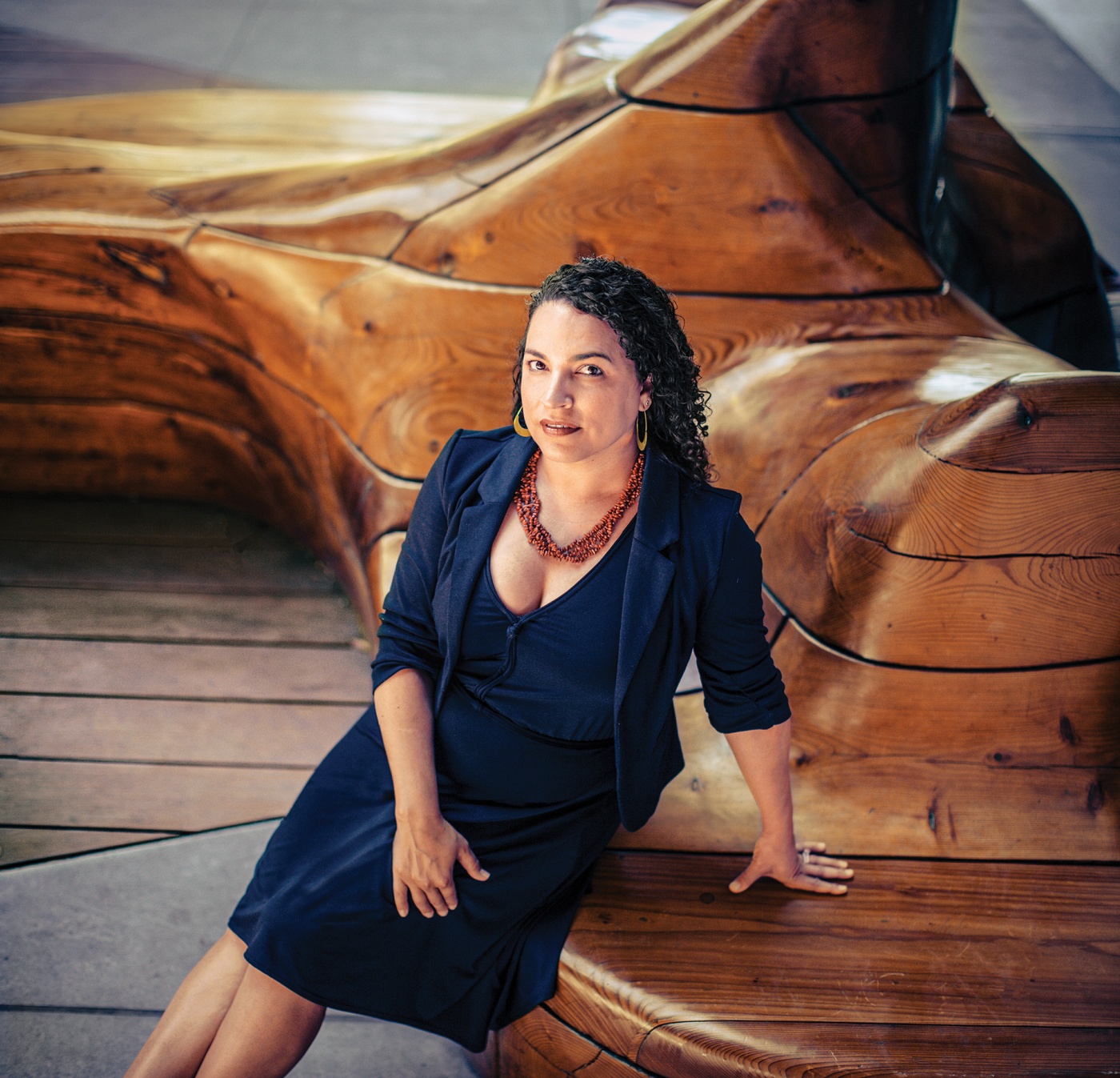 When a police officer does something wrong, it’s often chalked up to “one bad apple.” What does your research show?

From an empirical or data-based standpoint, the idea of one bad apple is absolutely not true. At the time Crook County came out, every single time there was an unarmed Black person who was shot, everyone from police to mayors would say “It’s just one bad apple.” That one-bad-apple myth allows us to see nationwide that police have largely been given a blank check to be able to shoot, harm, hurt, and degrade Black citizens, and do it with impunity.

It’s not just one bad apple, it’s the barrel. It’s the entire culture of policing, because in order to be a police officer, you have to participate in some way in what I’ve usually called the Code of Silence and the Code of Violence. That means if your partner is doing something that you find to be egregious, it would be in poor form—according to those cultural rules—to snitch. And if you do tell authority figures, you are breaking that code of what it means to be a police officer. To me, that [culture] allows an enormous amount of criminality to occur in policing. People say, “Well, aren’t there good officers?” Yes, perhaps. But the problem is that the culture is so pervasive: it goes into the prosecutor’s office, the judge’s courtroom. A few bad apples spoil the entire barrel, and the barrel is bigger than you think.

We should be talking about mass wrongful conviction. One of the things that should keep people up at night is that there are procedural harms and wrongdoing that are occurring in our court system en masse. People believe that individuals plead guilty without any type of coercion; that a judge is actually overseeing the procedural integrity of those convictions. The most alarming thing to me is that many times our court system operates more like a kangaroo court than a legitimate judicial body where people can rely on due process protections.

People are plea bargaining to things they may not have done, and the prosecutors and judges and even some of the defense attorneys are complicit in moving this machine along. Most wrongful convictions are thought of only in the most egregious cases, where someone is serving a life sentence for a crime they didn’t commit. But shouldn’t any conviction built upon poor evidence, or extracted under police abuse, be questioned as well?

How does the cash bail system figure into wrongful convictions?

People ask, “Why would you plead guilty to something you didn’t do?” without realizing that the stakes are extremely high. $500 may not seem like a lot to some middle- or upper-class people, but to someone charged with a small crime, $500 is the world. It could be $5,000, it could be $500,000 to them—if you don’t have the money, you’re not getting out of jail. If you didn’t pick up your child from daycare, the state will take your child. If you aren’t paying child support, another parent will take your child. You don’t report to work, you lose your job. You don’t pay the rent, the landlord will come in and you are now homeless.

The high stakes of small-term incarceration cannot be overstated. It may seem really attractive to plead guilty to a tiny crime, where you can leave on probation if you just say you did it. This is just another consequence of the fact that we have a jail system with abusive conditions, the risk of physical harm, and now COVID-19, and all these cascading problems that can happen to you if you don’t plead guilty. It makes sense that someone would just say “I can’t take it anymore! Just let me plead guilty and get this over with.” It’s not really a choice the way we think it is; they’re doing it against their will. So if we have a healthy bail fund that allows people to go free until trial, then they can participate a bit more in fighting their case. And that’s really important for people’s rights.

Do recent social actions, like mass donations to bail funds, make you hopeful?

I’ve seen bigger steps now than I ever have before, but there’s a part of me that’s feeling a deep amount of grief at this stage. I just keep saying, what took people so long to notice? Why wasn’t Eric Garner enough? Why wasn’t Tamir Rice enough? I could name over and over again the people in my head that were victimized and killed and never saw a day of justice in the courts. As someone who studies the police, I have to ask questions like: Why does it make sense to you to put a shoe on a human being? I have to explore how it’s not just any one individual, it’s a whole racist culture.

Think about George Floyd and how he was abused before his death. Imagine an officer stopping before he died. Now imagine George Floyd getting charged with disorderly conduct or some type of low-grade crime. Think about how egregious it would be that George Floyd would then go to prison for that crime, after the type of abuse he endured prior to being charged, after the prosecutor took that case without any acknowledgment of how George Floyd was degraded. That to me is the greatest sin of the system: we look critically only when there is a death. We look critically only when someone is really [physically] harmed. But we need to start looking critically at all the cases where there is a person like George Floyd and they survived, but they’re now convicted in that very system that mistreated them all the way through.

In response to Steve Maricic’s attack on Nicole Gonzalez Van Cleve’s claim that “It's not just one bad apple, it’s the barrel”: I understand the metaphor as an indictment not of the police officers themselves (the apples) but of the institution shaping them (the barrel) (“Policing Questions,” “What Do You Think?” November-December). When we talk about institutional reform, we’re talking about fixing a system that is failing to serve the communities it’s designed for, in this case the community of law enforcement officers as well as the community of people those officers have sworn to serve and protect. Here’s another metaphor: I want a strong safety net for our communities. A healthy and effective police force is part of that safety net. If the net is designed to catch the wrong fish and harm the innocent, then it’s the net that needs fixing, not the fishermen. I applaud the advocates who insist on mending torn institutions. I hope we find leaders who have the courage to reshape the institutions that need reforming.

Professor Van Cleve’s claim “It’s not just one bad apple, it’s the barrel” does a disservice to the many professional and competent law enforcement officers in the U.S. (“Rotten Culture,” September/October). I spent 37 years and my wife 30 years in law enforcement; my father was a career law enforcement officer; so are two of our children. Instead of mass condemnation, give credit to those who do the job professionally and help make it easier to recruit good people. My daughter, a college graduate, is studying to get her master’s in international security affairs at American University and makes about $55,000 per year as a uniformed officer. She is, in many respects, what law enforcement needs. She is in “the barrel” and doesn’t deserve the criticism of Professor Van Cleve.

This entire issue is about racism? We can target two things: the social chaos in poor neighborhoods, and drug lords who now control many areas and draft our youths as troops to maintain and extend their control. Every neighborhood needs basic infrastructure, supposedly supplied by local government: utilities, clean streets, street lights, public transit, and police protection. Without police protection, the other five cannot be provided.

If Professor Van Cleve had the experience of returning to her home to see a window broken or a door jimmied open, she would call the police and an officer would arrive and enter her home, hand on firearm. Upon finding no culprit, the officer would help her file a theft report. After thanking the officer, she would realize that yes, there are many good officers. Were she to experience a traffic accident in which she or others were injured, were she to be assaulted, she would again conclude that there are many good officers. I hope she may never experience these situations; yet she should realize that millions of Americans do and, more often than not, appreciate the assistance they receive. Professor Van Cleve has made a fine contribution to a better understanding of the implicit, and sometimes explicit, racism in the criminal justice system. Had she responded to the question of whether there are good officers by saying “yes”—rather than “yes, perhaps”—she would have made an even stronger contribution.

Nicole Gonzalez Van Cleve claims, “It's not just one bad apple, it’s the barrel.” There are 800,000 law enforcement officers in the U.S. Is she saying that all of them are “bad apples,” or is it just 400,000? Does she have proof that all police officers participate in the “code of silence” and “code of violence”? Twelve percent of America’s cops are Black; 17 percent are Hispanic; 1.5 percent are Asian. Is the professor saying that most of them are willing to turn a blind eye to racial oppression? A Gallup survey released in August found that 81 percent of Black Americans “want police to spend the same amount of or more time in their area.” God bless them and the police who protect them.

Missing from the anti-police invective is any insight on hiring “better” officers. Andre McGregor ’04 said “police should maintain hiring practices similar to that of the FBI, where they are selecting top talent.” How should we do that? While enticing top talent might be easy for the FBI and its six-figure salaries, police departments across the United States do not have such largess. In fact, when I was in the police academy 15 years ago, my family missed qualifying for reduced-price public school lunches by just $1,500.

Why would anyone want to be a police officer? My agency likely will be unable to find the 60 suitable candidates desired for an upcoming academy class—suitable, not “top talent.” This is not from lack of trying. It’s a lack of interest from twenty-somethings in taking on a job with miserable hours, grueling schedules, mediocre to poor pay, the regular risk of physical confrontation and, as evidenced in this edition of BAM, animosity from large segments of society.

A truly excellent piece of writing, making the flaws in our justice system, or injustice system, so crystal clear (“Rotten Culture,” Under the Elms, Sept./Oct. ’20). It’s also, unfortunately, very depressing. Will it ever get better?